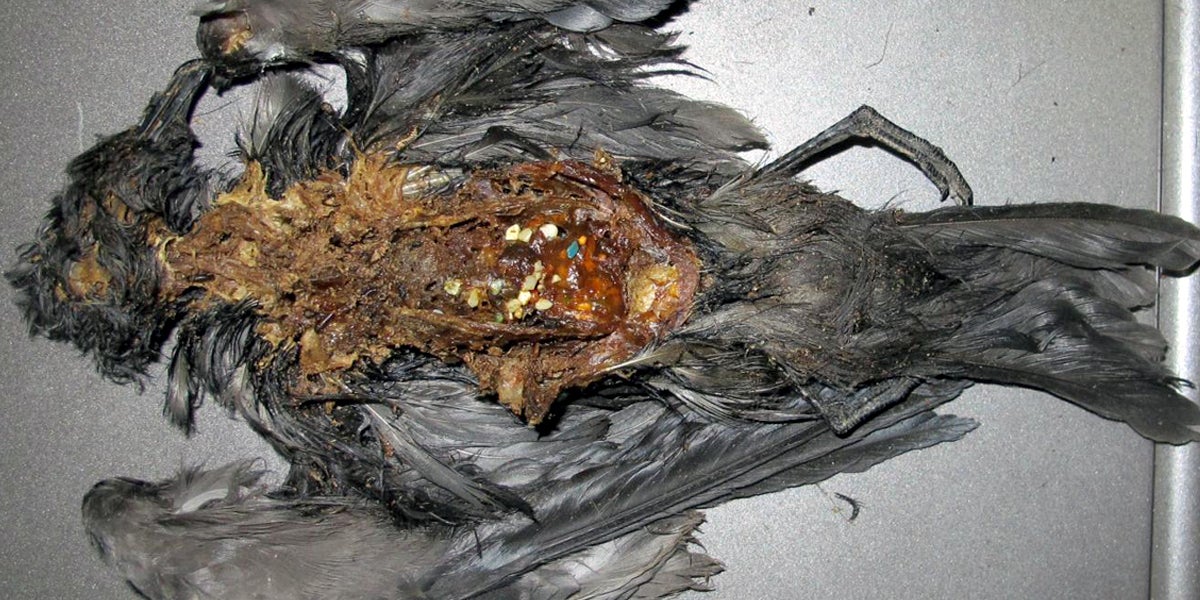 Imagine that you are constantly eating, but slowly starving to death. Hundreds of species of marine mammals, fish, birds and sea turtles face this risk every day when they mistake plastic debris for food.

Plastic debris can be found in oceans around the world. Scientists have estimated that there are more than 5 trillion pieces of plastic weighing more than a quarter of a million tons floating at sea globally. Most of this plastic debris comes from sources on land and ends up in oceans and bays due largely to poor waste management.

Plastic does not biodegrade, but at sea large pieces of plastic break down into increasingly smaller fragments that are easy for animals to consume. Nothing good comes to animals that mistake plastic for a meal. They may suffer from malnutrition, intestinal blockage or slow poisoning from chemicals in or attached to the plastic.

Many seabird species, including the blue petrel (Halobaena caerulea), consume plastic at sea because algae on the plastic produce an odor that resembles their food sources. J.J. Harrison

Despite the pervasiveness and severity of this problem, scientists still do not fully understand why so many marine animals make this mistake in the first place. It has been commonly assumed, but rarely tested, that seabirds eat plastic debris because it looks like the birds’ natural prey. However, in a study that my coauthors and I just published in Science Advances, we propose a new explanation: For many imperiled species, marine plastic debris also produces an odor that the birds associate with food.

A Nose for Sulfur

Perhaps the most severely impacted animals are tube-nosed seabirds, a group that includes albatrosses, shearwaters and petrels. These birds are pelagic: they often remain at sea for years at a time, searching for food over hundreds or thousands of square kilometers of open ocean, visiting land only to breed and rear their young. Many are also at risk of extinction. According to the International Union for the Conservation of Nature, nearly half of the approximately 120 species of tube-nosed seabirds are either threatened, endangered or critically endangered.

Although there are many fish in the sea, areas that reliably contain food are very patchy. In other words, tube-nosed seabirds are searching for a “needle in a haystack” when they forage. They may be searching for fish, squid, krill or other items, and it is possible that plastic debris visually resembles these prey. But we believe that tells only part of a more complex story. 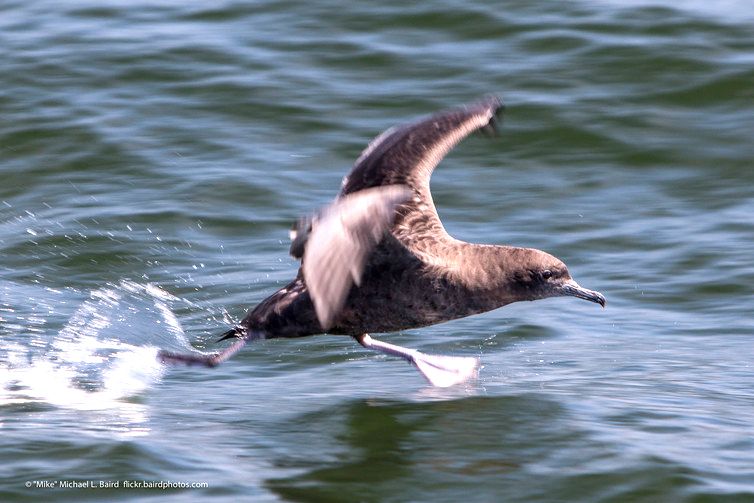 Pioneering research by Dr. Thomas Grubb Jr. in the early 1970s showed that tube-nosed seabirds use their powerful sense of smell or olfaction, to find food effectively, even when heavy fog obscures their vision. Two decades later, Dr. Gabrielle Nevitt and colleagues found that certain species of tube-nosed seabirds are attracted to dimethyl sulfide (DMS), a natural scented sulfur compound. DMS comes from marine algae, which produce a related chemical called DMSP inside their cells. When those cells are damaged—for example, when algae die, or when marine grazers like krill eat it—DMSP breaks down, producing DMS. The smell of DMS alerts seabirds that food is nearby—not the algae, but the krill that are consuming the algae.

Dr. Nevitt and I wondered whether these seabirds were being tricked into consuming marine plastic debris because of the way it smelled. To test this idea, my coauthors and I created a database collecting every study we could find that recorded plastic ingestion by tube-nosed seabirds over the past 50 years. This database contained information from over 20,000 birds of more than 70 species. It showed that species of birds that use DMS as a foraging cue eat plastic nearly six times as frequently as species that are not attracted to the smell of DMS while foraging.

To further test our theory, we needed to analyze how marine plastic debris smells. To do so, I took beads of the three most common types of floating plastic—polypropylene and low-and high-density polyethylene—and sewed them inside custom mesh bags, which we attached to two buoys off of California’s central coast. We hypothesized that algae would coat the plastic at sea, a process known as biofouling and produce DMS. 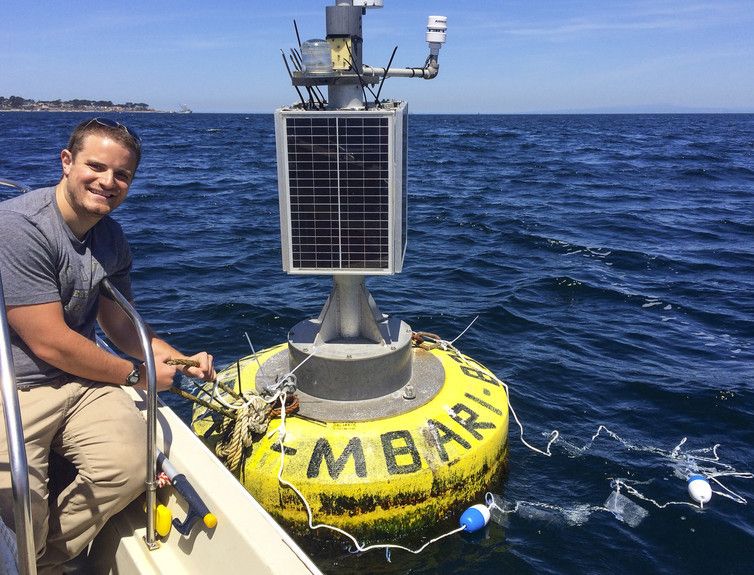 After the plastic had been immersed for about a month at sea, I retrieved it and brought it to a lab that is not usually a stop for marine scientists: the Robert Mondavi Institute for Food and Wine Science at UC Davis. There we used a gas chromatograph, specifically built to detect sulfur odors in wine, beer and other food products, to measure the chemical signature of our experimental marine debris. Sulfur compounds have a very distinct odor; to humans they smell like rotten eggs or decaying seaweed on the beach, but to some species of seabirds DMS smells delicious!

Sure enough, every sample of plastic we collected was coated with algae and had substantial amounts of DMS associated with it. We found levels of DMS that were higher than normal background concentrations in the environment and well above levels that tube-nosed seabirds can detect and use to find food. These results provide the first evidence that, in addition to looking like food, plastic debris may also confuse seabirds that hunt by smell.

Our findings have important implications. First, they suggest that plastic debris may be a more insidious threat to marine life than we previously believed. If plastic looks and smells like food, it is more likely to be mistaken for prey than if it just looks like food.

Second, we found through data analysis that small, secretive burrow-nesting seabirds, such as prions, storm petrels and shearwaters, are more likely to confuse plastic for food than their more charismatic, surface-nesting relatives such as albatrosses. This difference matters because populations of hard-to-observe burrow-nesting seabirds are more difficult to count than surface-nesting species, so they often are not surveyed as closely. Therefore, we recommend increased monitoring of these less charismatic species that may be at greater risk of plastic ingestion.

Finally, our results provide a deeper understanding for why certain marine organisms are inexorably trapped into mistaking plastic for food. The patterns we found in birds should also be investigated in other groups of species, like fish or sea turtles. Reducing marine plastic pollution is a long-term, large-scale challenge, but figuring out why some species continue to mistake plastic for food is the first step toward finding ways to protect them.

Matthew Savoca is a Ph.D. student in the Graduate Group in Ecology at UC Davis.