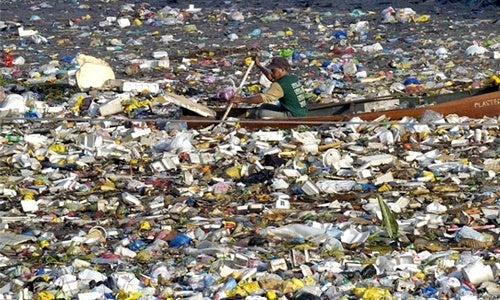 There will be more plastic than fish in the ocean by 2050, warned the Ellen MacArthur Foundation in a report published Tuesday. The report, The New Plastics Economy: Rethinking the Future of Plastics, was produced by the foundation and the World Economic Forum with analytical support from McKinsey & Company.

There will be more plastic than fish in the ocean by 2050, according to a new report from the Ellen MacArthur Foundation. Photo credit: Plastic Pollution

“In a business-as-usual scenario, the ocean is expected to contain one ton of plastic for every three tons of fish by 2025, and by 2050, more plastics than fish (by weight).”

Plastic production has increased 20-fold since 1964, reaching 311 million tons in 2014, the report says. It is expected to double again in the next 20 years and almost quadruple by 2050. New plastics will consume 20 percent of all oil production within 35 years, up from an estimated 5 percent today. 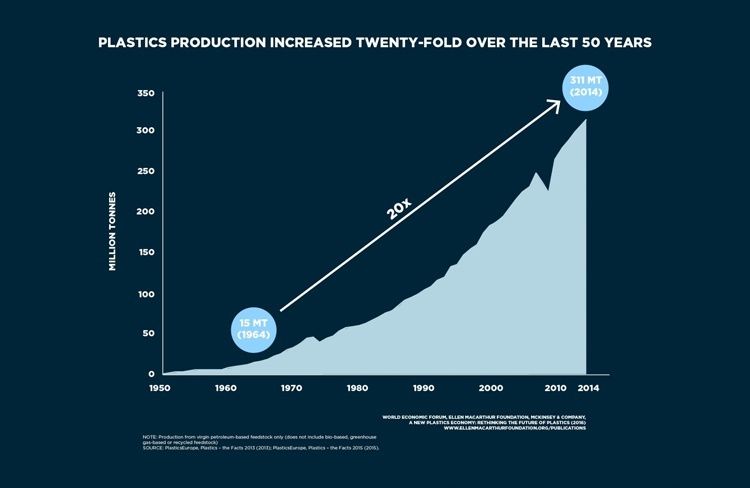 The vast majority of plastics is not effectively recycled, either, according to the report. Only 5 percent is properly recycled, while 40 percent is sent to a landfill and a third ends up in the environment, including in the world’s oceans. Much of the rest is burned, which generates energy, The Guardian noted, but also causes “more fossil fuels to be consumed in order to make new plastic bags, cups, tubs and consumer devices demanded by the economy.”

The report provides a first-ever “vision of a global economy in which plastics never become waste, and outlines concrete steps towards achieving the systemic shift needed,” the Ellen MacArthur Foundation said. 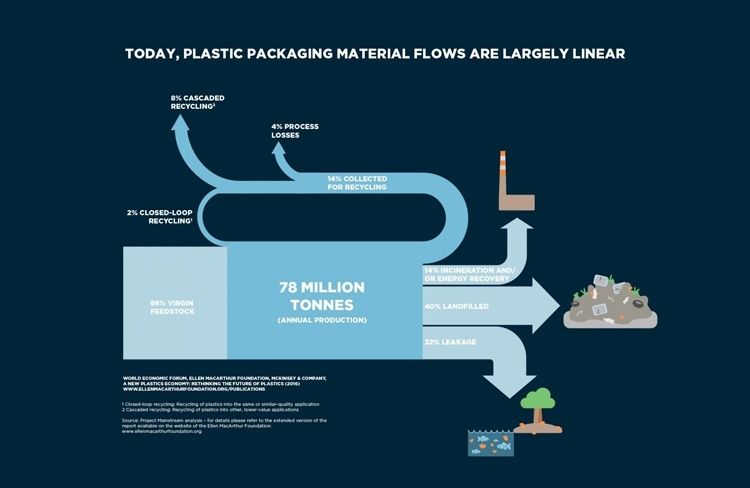 This vision is built on applying “circular economy principles” to global plastic packaging flows, which could “transform the plastics economy and drastically reduce negative externalities such as leakage into oceans,” the foundation explained. The report calls for a transition away from “today’s linear ‘take, make, dispose’ economic model” and towards an economy that is “restorative and regenerative by design” and which altogether eliminates the concept of waste (just as there is no concept of waste in natural systems).

The report concludes that the plastics industry is not doing nearly enough to address plastic pollution.

“Plastics are the workhorse material of the modern economy, with unbeaten properties,” Dr. Martin Stuchtey of the McKinsey Center for Business and Environment, who helped produce the report, said. “However they are also the ultimate single-use material. Growing volumes of end-of-use plastics are generating costs and destroying value to the industry. After-use plastics could, with circular economy thinking, be turned into valuable feedstock.” 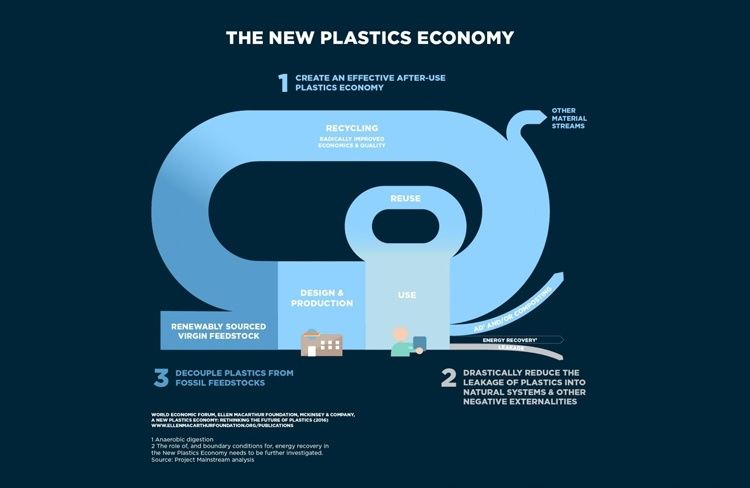 The report calls for a transition to a circular economy. Photo credit: Ellen MacArthur Foundation

The report calls for smarter packaging, such as phasing out hard-to-recycle plastics like polyvinyl chloride and expandable polystyrene, redesigning plastic items so they can be reused better, rethinking their production methods to make recycling easier and developing compostable packing on a larger scale.