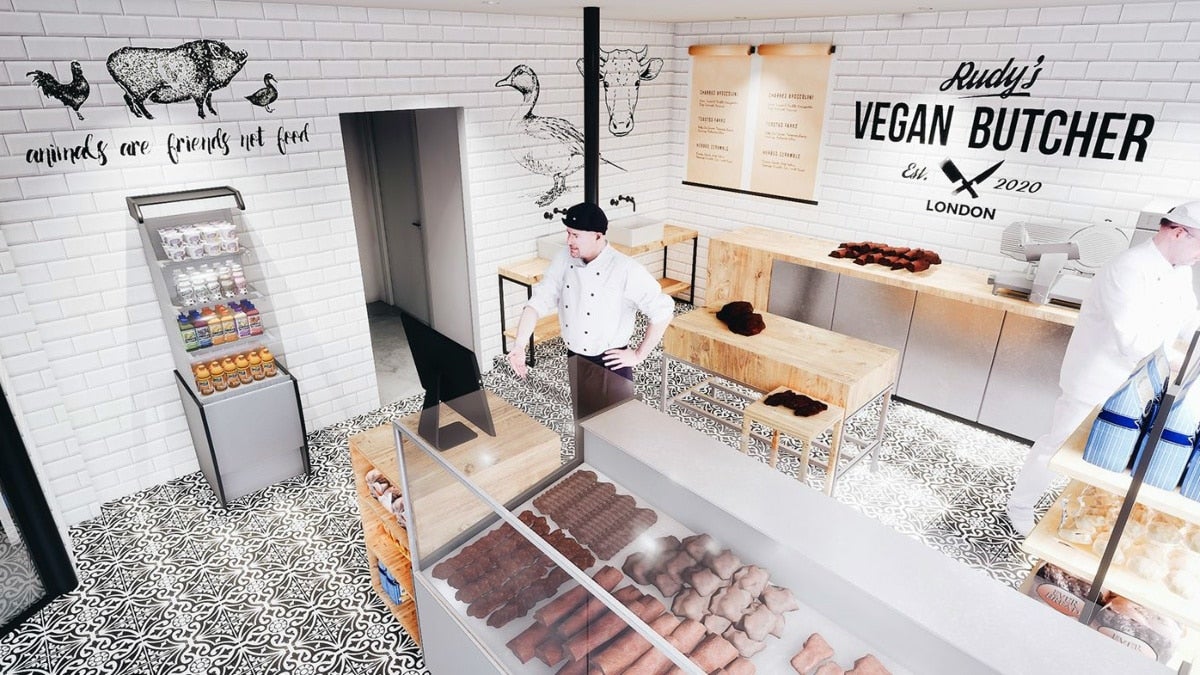 On World Vegan Day this past Nov. 1, the UK’s first permanent vegan butcher shop opened in London and completely sold out. Inundated with 100 online orders within their first 10 minutes, the shop also attracted long lines down the street, reported Plant Based News.

According to Live Kindly, while set up much like a traditional butcher shop with white tile walls and meat cases, Rudy’s Vegan Butcher offers patrons completely meat- and dairy-free selections, including plant-based pastrami, seitan chicken, ‘soysage’ patties and Christmas turkey rolls. The substitutes are made from soya and wheat protein seitan that mimic the experience of meat, Business Insider reported.

Spurred on by the animal cruelty he witnessed as a professional chef, Foster and his business and life partner Ruth (Rudy) Mumma opened the non-traditional butcher shop as an extension of their popular restaurant, Rudy’s Dirty Vegan Diner. The latter launched in April 2018 as London’s first vegan diner, Camden New Journal reported.

“It didn’t seem right anymore,” Foster told the news report. “We can survive and thrive far better on a plant-based diet.”

The restaurant is Foster’s and Mumma’s outlet for promoting and educating others about animal rights using “unbeatable, mouth-watering food and a punk AF attitude towards getting sh!t done,” their website says.

The diner reimagines popular American comfort and fast food entirely out of plants. Now, the butcher shop expands their vision and offerings, as do DIY home kits for favorite Rudy’s meals. For every DIY kit purchased, Rudy’s donates £1 (about a dollar) to Friend Farm Animal Sanctuary.

In addition to being cruelty-free for animals, a vegan diet has also been touted as one of the most effective ways individuals can reduce their carbon footprint. Global meat production, especially beef and lamb, requires a high amount of carbon emissions and strains natural resources, something meatless alternatives can largely avoid, the New York Times reported.

The UK plant-based movement is booming, despite the fact that only one percent of the population is vegan, reported Business Insider. Sales of plant-based foods grew 40 percent between 2014 and 2019 to around .05 billion per year in the UK, the report estimated. This figure is expected to exceed .41 billion by 2024.

Globally, the interest in plant-based products and alternative protein options mirrors that of the UK, reported Fox News. The U.S. trend has been boosted by meat shortages at grocery stores, due to meat plants closing during the pandemic.

“Many consumers perceive that plant-based foods are a healthier option, and this notion is the key driver behind the reduction in meat consumption in recent years,” food and drink analyst Kate Vlietstra told Business Insider.