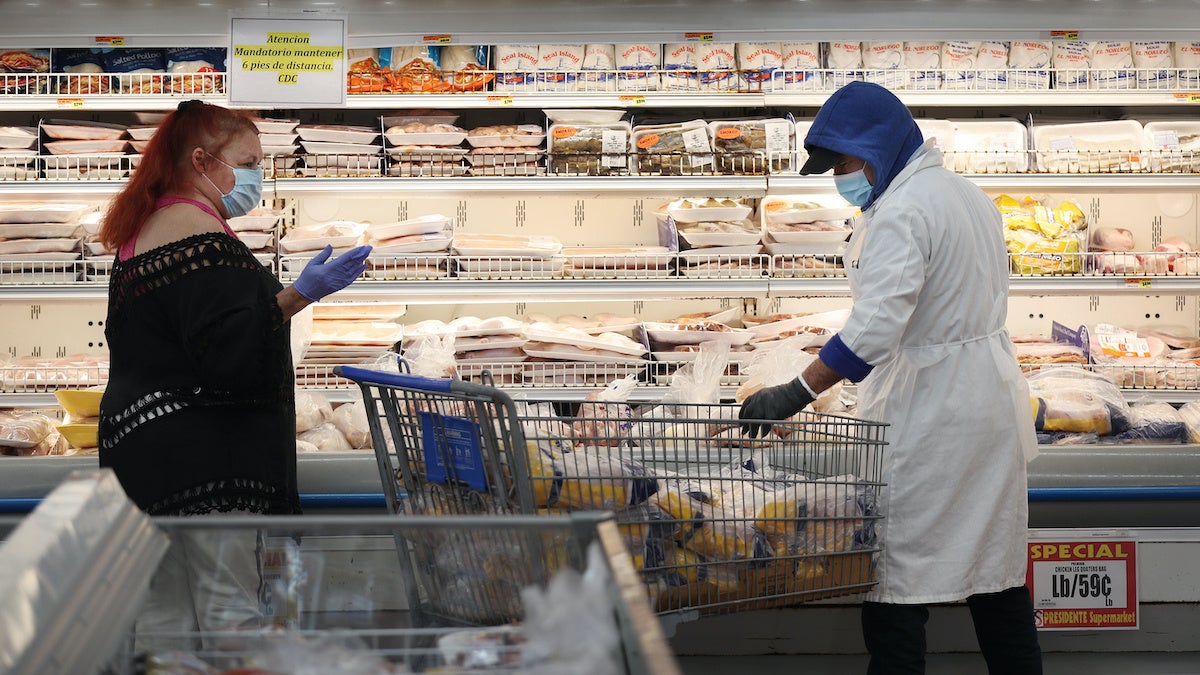 An employee restocks the meat section at a grocery store in Miami, Florida on April 13. Joe Raedle / Getty Images

Now might be a good time to go vegetarian.

As meat-processing plants close across the country to stop the new coronavirus from spreading among employees, industry leaders and experts are warning of meat shortages in the nation’s grocery stores.

“The food supply chain is breaking,” Tyson Foods chairman of the board John Tyson wrote in a full-page ad published in The New York Times, The Washington Post and the Arkansas Democrat-Gazette Sunday, as well as in a blog on the company’s website, as NBC News reported.

In these challenging days, we have a responsibility to feed our nation and the world. Though a delicate balance, our top priority remains team member safety. Together, we will get through this and forge a path forward. Read more about our efforts from our Chairman John H. Tyson.

Tyson’s warning came after the company closed down two pork processing plants in Waterloo, Indiana and Logansport, Indiana in order to test workers for the virus that causes COVID-19, CNN reported. Other major players have also closed plants as thousands of slaughterhouse employees have tested positive for the virus. Three of the nation’s largest pork plants, which together process around 15 percent of the nation’s pig meat, have shuttered indefinitely: Tyson’s Waterloo plant; the Smithfield Foods plant in Sioux Falls, South Dakota; and the JBS pork processing plant in Worthington, Minnesota.

“As pork, beef and chicken plants are being forced to close, even for short periods of time, millions of pounds of meat will disappear from the supply chain,” Tyson wrote. “As a result, there will be limited supply of our products available in grocery stores until we are able to reopen our facilities that are currently closed.”

“We’ve just completed our third week of reduced slaughter and production,” Smith told NBC News. “My guess is that about one week out, perhaps around May 1, shortages will begin developing at retail meat counters.”

There is currently enough meat in freezers to keep Americans fed, NBC News reported. The challenge is with moving meat, especially fresh, to grocery stores.

Slaughterhouses have been forced to close because working conditions make social distancing difficult.

“I work about two feet from my coworkers,” an employee at Tyson’s Waterloo plant who tested positive for the virus and asked to be identified as Donald told CNN. “I’m about an arm’s length away from my partner. It’s close.”

The Waterloo plant only closed under pressure from the community. It was linked to almost half of Black Hawk County, Iowa’s COVID-19 cases as of April 21.

Industry-wide, more than 5,000 meat and food processing workers have been sickened with the virus and 13 have died, according to United Food and Commercial Workers International Union figures reported by NBC News.

America's meatpacking workers are on the frontlines of #coronavirus outbreak, putting their lives at risk to keep our families fed and our food supply strong.@UFCW is calling on @WhiteHouse for immediate action. We must protect these brave workers. #1uhttps://t.co/EZ2IYWzp7q

However, the case of the Waterloo plant calls into question how consistently and effectively these measures are implemented.

“There was no enforcement of PPE, there was no requirement. In fact, some people we saw walking around actually had masks, but they were wearing them around their neck,” Thompson told CNN. “I was surprised by the lack of measures, but I was further surprised by what they thought they were doing right.”

The closure of meat processing plants has also impacted farmers and the animals they raise.

“In addition to meat shortages, this is a serious food waste issue,” Tyson wrote. “Farmers across the nation simply will not have anywhere to sell their livestock to be processed, when they could have fed the nation. Millions of animals – chickens, pigs and cattle – will be depopulated because of the closure of our processing facilities.”

In some places, this is already happening. Iowa farmer Al Van Beek told Reuters he was forced to induce abortions in his pregnant sows because he had nowhere to sell his adult pigs to make room for the 7,500 piglets he was expecting.

“We have nowhere to go with the pigs,” Van Beek said. “What are we going to do?”

Animal welfare advocates, however, called out Tyson for only caring about animal lives because they could not profit from them.

“Just as disingenuous as it has been for some meat plants to blame low-paid workers for their living conditions, Tyson Foods, which slits the throats of frightened animals every day that it operates, now has the gall to seem worried about ‘depopulating’ — aka killing,” People for the Ethical Treatment of Animals (PETA) wrote in a Twitter statement.

Just as disingenuous as it has been for some meat plants to blame low-paid workers for their living conditions, Tyson Foods, which slits the throats of frightened animals every day that it operates, now has the gall to seem worried about "depopulating" — aka killing.

The group recommended Tyson solve its pandemic problems by switching to vegan “meat” instead.

How can Tyson Foods fix its problems entirely?

By switching its plants to producing the #vegan meat that it's already selling instead of slaughtering animals.