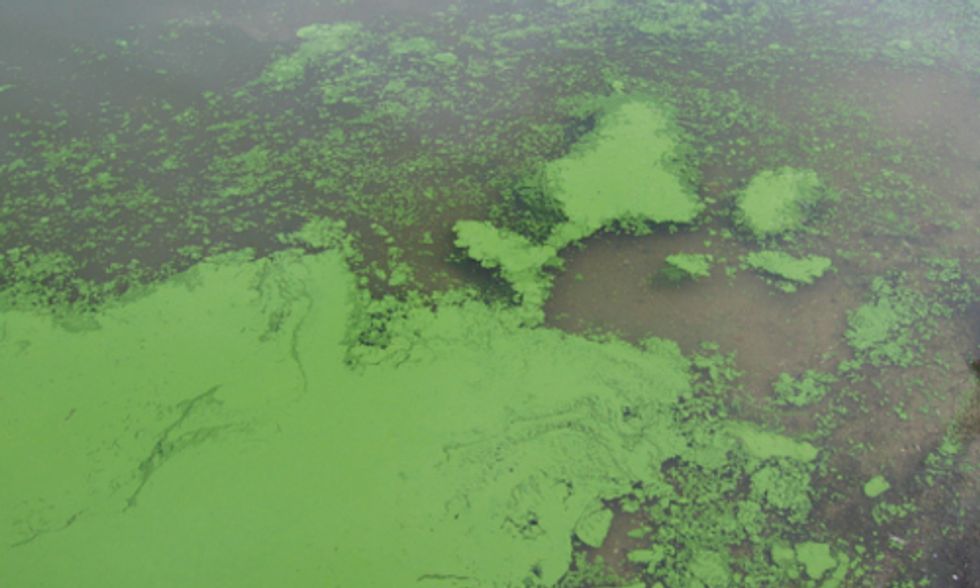 I live on a lakeshore. It’s face changes not only day-to-day, but moment to moment, menacing and dark, then ethereal with silver light dancing everywhere, then solemn again like glass, then lively with trout feeding at the surface. This spring, I saw a new face.

In April, we experienced a very unpleasant smell and taste in the lake water. For days, no trout hit the surface. I paddled out in the canoe and ran my fingers through the algae bloom. I had not witnessed this face before, and it startled me. A biologist friend and I collected water samples, looked at droplets under our microscopes, and began to identify the organisms living in our lake.

If you have not seen this sort of thing, imagine: a fraction of a drop of water, pressed flat between two pieces of glass, a tiny damp smudge, and within this world, little bacteria, diatoms and dinoflagellates swim around as if alien sea monsters in the mid-Pacific.

We found primarily Volvox algae, which is non-toxic, but which depletes lake oxygen as it dies off. Repeated algae blooms can kill lakes or transform them to swamp conditions. We found smaller traces of toxic cyano-bacteria, Nostoc sp., which can kill other lake species. These clues all indicate a lake going through an ecological transition.

The Volvox bloom tells us that our lake is processing a load of nutrients, typically phosphates and nitrates, which typically flow from human settlements. The annoying smell and taste indicate the decomposing, low-oxygen conditions. This is a rural lake with forested park on about half the shoreline, a few small farms and less than a hundred homes in the 6-square-kilometer watershed. Yet, here we witness the human impact, even in modest numbers, on Earth’s delicately balanced ecosystems.

You probably know the sobering statistics: About three-thousandths, 0.3 percent, of all fresh water on Earth exists in lakes and rivers; 30 percent exists in soil moisture and ground water; and 70 percent remains locked up in ice. The ice, we know, is receding, transforming into saline ocean water or fresh groundwater. Meanwhile, human usage depletes the groundwater, the lakes, rivers and aquifers.

Today, on Earth, more than one billion people have no access to clean, fresh water. In wealthy industrial and post-industrial nations, consumers unwittingly use massive water resources with every purchase they make, such as the 650 gallons necessary to produce a typical cotton t-shirt, or the 139 gallons of water to prepare a single 16-ounce cup of fancy logo coffee. Producing a pound of beef in industrial ranching requires more than two thousand gallons of water.

North Americans use some 100 gallons of water per person each day (more than 120 gallons in Los Angeles), while in Chad, Niger, Ghana and Gambia, the average person uses as little as one gallon, and are fortunate if their water is clean and safe.

Industrial projects such as the Canadian tar sands, shale oil fracking and pesticide-based agriculture pollute the water tables, rivers and lakes. About half the world’s fresh water is polluted. Furthermore, increasing global temperatures transform water to vapor at a faster rate, drying lakes and aggravating the water crisis.

The Aral Sea, in Kazakhstan, drained for cotton production and drying under increased heat, has dropped 16 meters and shrunk in size by 70 percent. Lake Urmia in Iran has dropped more than 10 meters and shrunk to about half its size. Poyang, once the largest freshwater lake in China, has virtually dried up due to drought and water diversion. Lake Chad, between Niger, Nigeria, Cameroon and Chad, has dropped 10 meters and lost 95 percent of its area, as regional governments fight over the remnants.

In the U.S., the 450,000 km² Ogallala Aquifer, providing irrigation in the U.S. for a century, but depleting faster than it is replenished for decades, is now dry in some regions, and would take tens of thousands of years to replenish by natural rain cycles. The Colorado River now runs dry long before it reaches the sea. Owens Lake in Southern California, once covering 280-square-kilometers, up to 18 meters deep, is now nearly dry, diverted to supply water to Los Angles. The California drought this summer shut down power systems, left communities without local water and set in motion a warming feedback cycle when those communities began to truck water in from far away, burning hydrocarbons to move water.

This story is replicated, with variations, on thousands of lakes, rivers and aquifers around the world. Hotter global temperatures increase droughts, while the world’s human population consumes fresh water faster than Earth’s natural hydrological systems can replenish it. Every day, we deplete Earth’s shrinking water reserves, and some regions have already reached what Lester Brown identifies as “peak water.”

The Capitalist, Industrial Response: Sell It!

In 2006, Europe’s largest bank, Swiss UBS, wrote, “Water scarcity: The defining crisis of the 21st century?” The following year they bought UK’s Southern Water with JP Morgan and Australia’s Challenger Fund. In 2008, Credit Suisse warned investors of the “depletion of freshwater reserves [due to] “pollution, disappearance of glaciers and population growth,” and advised: “One way to take advantage of this trend is to invest in companies geared to water generation.”

We know that companies do not actually “generate” any water, but rather lay claim to it. They see water shortages as an opportunity to privatize water and sell it to those who can afford it. “Water is the oil of the twenty-first century,” DOW Chemical CEO Andrew Liveris told The Economist in 2008.

According to a report by Global Research, water is now a $425 billion annual industry. Five food and beverage giants —Nestlé, Unilever, Coca-Cola, Anheuser Busch and Danone—consume almost 575 billion liters of water per year. In a pattern we have come to recognize, the industrial solution makes the core problem worse. A single liter of bottled water requires three liters of water to produce and leaves a trail of plastic throughout the world.

In Bolivia, in the 1990s, the World Bank, the U.S. firm Bechtel and the Bolivian government teamed up to privatize water, raise water rates and outlaw citizen water collection. These actions led to an uprising in 2000, an all-out revolution and ultimately a change of government.

In 2003, Goldman Sachs and partners acquired the former French water-treatment and chemical company Ondeo Nalco for $4.2 billion, and in 2008, a Goldman Sachs report called water “the petroleum for the next century” an opportunity for investment and profit. In 2008, Goldman Sachs bought a $50 million USD share of China Water and Drinks Inc., which supplies allegedly purified water to Coca-Cola.

The alternative to turning water into a commodity is for communities to protect and preserve their scarce water cycles. Turning water into a commodity, the corporate response, is not going to save lakes, replenish drained aquifers, or reverse global warming. Communities will have to limit their own water use and protect water sources. Meanwhile, to stabilize Earth’s climate we need to phase out fossil fuels quickly.

In our community, the algae bloom alerted us to collect data and begin the long process of mitigating and reversing our impact on the lake. Perhaps, if the residents in our watershed can reduce our phosphate and nitrogen flow, we can save our lake from becoming an algae swamp. Others have not been so successful. Algae blooms killed Lake Erie, between Canada and the U.S., and likewise Green Lake in Washington State, Blue Lake and Fern Ridge Lake in Oregon, Lough Neagh in the UK, Lake Taihu in Jiangsu China, and so forth around the world: thousands of dead or swampy former lakes.

As I write this, I’m watching cutthroat trout hit the lake surface, and this gives me some comfort. Fortunately for our community, we can take actions to reduce the nutrient flow from our homes and help restabilize our lake. We can avoid phosphate soaps and nitrate fertilizers, allow manure to compost well before spreading on gardens, isolate manure from the water run-off, upgrade and maintain septic fields, and so forth.

The wind has picked up, and the lake’s face changes once again, all rippley and grey now. The trout have gone back to their cool holes. "Show me!", the lake seems to say. Talk is cheap.