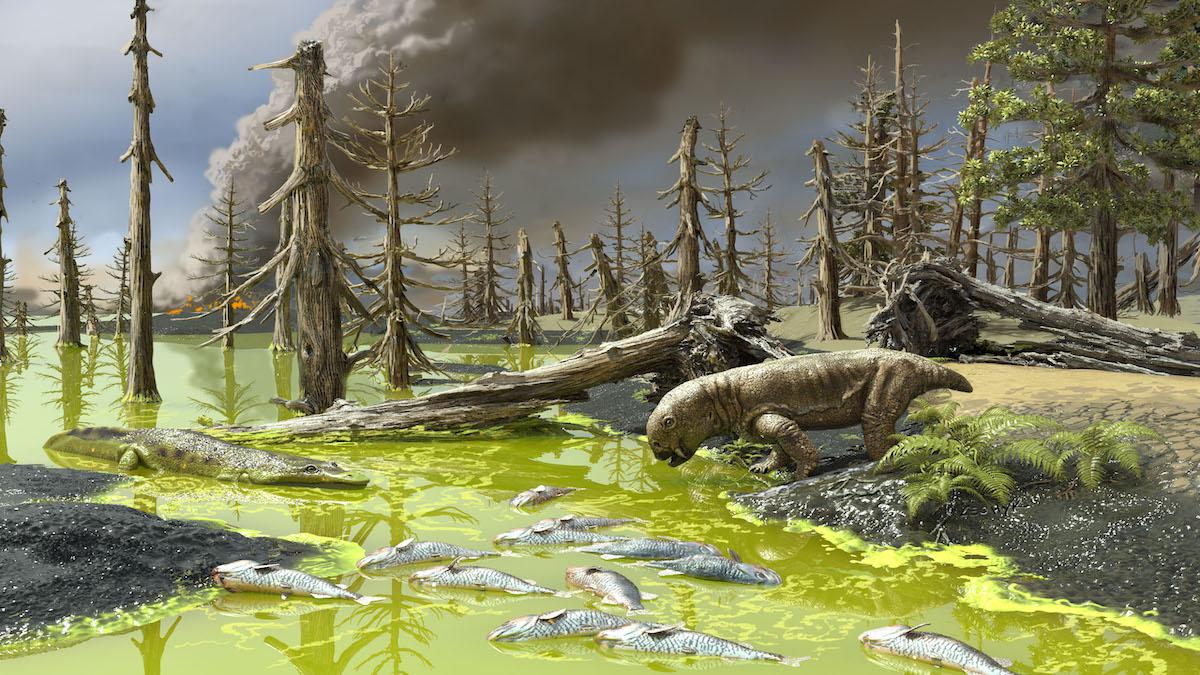 On September 15, researchers published a study finding that the smoke and ash from Australia’s devastating 2019 and 2020 wildfires had likely triggered a widespread algal bloom in the Southern Ocean.

Two days later, another study published in Nature Communications revealed that this sort of thing had happened before. In the Permian mass extinction event some 252 million years ago, a combination of greenhouse gas emissions from volcanic eruptions, temperature increases and deforestation created a “poisonous soup” of algal blooms that exacerbated an already dire scenario for life, as study co-author Vivi Vajda of the Swedish Museum of Natural History put it in an interview.

“The past really gives us the clue to the future,” Vajda told EcoWatch.

Vajda is part of an international team of researchers including Christopher Fielding and Tracy Frank from the U.S. and Chris Mays, also with the museum, who have been working to understand the Permian mass extinction event. This was “the Great Dying,” the worst mass extinction in Earth’s history, and it has some uncomfortable parallels to what is happening today.

Scientists now believe it was triggered by volcanic activity in Siberia, which spewed 100,000 billion tonnes of carbon into the atmosphere. While researchers are not willing to rule out an asteroid strike, there is no evidence of shocked quartz in the fossil record that would indicate one, Vajda said.

“If for example this does turn out to be purely a volcanically driven extinction event and it can occur so rapidly, then it doesn’t bode particularly well for the modern warming,” Mays told EcoWatch.

Indeed, the atmospheric concentration of carbon dioxide right before the extinction stood at 400 million parts per million, a little less than the levels observed today. Those levels then shot up by a factor of about six in less than 10,000 years. During that same time, temperatures at high latitudes rose by 10 to 14 degrees Celsius.

All of this was devastating for life.

“It seemed to be a very, very, very fast extinction,” Vajda said, and this is evident in the fossil record.

Vajda and Mays study this record by grinding up rocks and looking at microscopic fossils under a light microscope.

“In one centimeter you have fantastic pollen spores,” Vajda said, “in the next you have just charcoal and fungi for like half a meter, and then a totally new world appears with new flora.”

It took seven to 10 million years for coal seams to form again, which means the climate was capable of supporting wetlands, Mays explained. But pre-extinction biodiversity levels did not return for tens of millions of years.

The new paper provides a “missing link” in the scientific community’s understanding of the extinction, Mays explained.

“We’d known that the freshwater extinction occurred, but we hadn’t really had a good handle on what was causing it,” Mays said.

It turns out the answer is toxic algal blooms at levels similar to the blooms we experience today. These blooms are so deadly for other life because they deplete the water of oxygen and also release separate toxins.

“These are the main ways we see modern algae and bacteria killing off large animals in these mass die-off events,” Mays said.

The researchers discovered the presence of the algal blooms following the Permian extinction by looking at fossil evidence from the Sydney Basin in Australia.

“You basically take a rock and you dissolve it, and you look at all the little fossils that are hiding in there, and, by counting those up, and getting an idea of their concentration within the rocks, you can get an idea of how many of these things were blooming at the time,” Mays explained.

From this record, the researchers concluded that massive toxic blooms had recurred periodically for hundreds of thousands of years following the extinction, delaying the recovery of life. For three million years afterwards, algae and bacteria continued to flourish in quickly-disappearing lakes and rivers that were low in oxygen and probably toxic. Further, the researchers looked back through the fossil record and found that algal blooms were a recurring feature of extinction events triggered by global warming.

Algae thrive in warmer temperatures and, because they’re photosynthetic, “they soak up CO2 like sponges,” Mays said.

They also require some kind of nutrient to thrive, usually iron, phosphorus, or nitrogen. In the case of the Permian extinction, these nutrients were supplied by massive deforestation.

In a previous paper, Mays, Vajda and their team had shown that the extinction event led to a mass die-off of the Glossopteris forests of the Southern continent. There is evidence in the fossil records of wildfires. The nutrients from the destroyed forests fed the algal blooms. Further, their destruction delayed recovery in another way. The forests had been coal-bed forming wetlands that helped draw down carbon dioxide. Their removal meant it took the planet much longer to cool down.

“It really shows the importance of the vegetation,” Vajda said.

A Unique Time in History

Rising carbon dioxide? Deforestation? Algal blooms? If all of this is sounding frighteningly familiar, you’re not alone.

Today, toxic blooms are caused by human-driven deforestation at the mouths of rivers, as well as by runoff from agriculture, which is also, of course, a major driver of deforestation. They are common in the Great Lakes of the U.S. and in the Baltic in Sweden.

“Every summer, by July, you can’t swim in the sea anymore,” Vajda said.

If we are already seeing algal blooms at Permian-extinction-event concentrations, does that mean it’s too late? Is the climate crisis destined to trigger another great dying?

Vajda and Mays don’t think so. Vajda pointed to the rapid development of the coronavirus vaccine and the banning of CFCs to protect the ozone layer as examples of the fact that humans can act quickly on international problems when we have to.

Mays agreed, and said that we have no choice but to try and save ourselves.

“The trilobites that went extinct at the end of the Permian, they didn’t have the option to do it,” he said, “the dinosaurs couldn’t choose to prevent the rock from hitting, but this is a unique time in history when the species that is around and actually causing a big part of the problem can actually resolve it.”