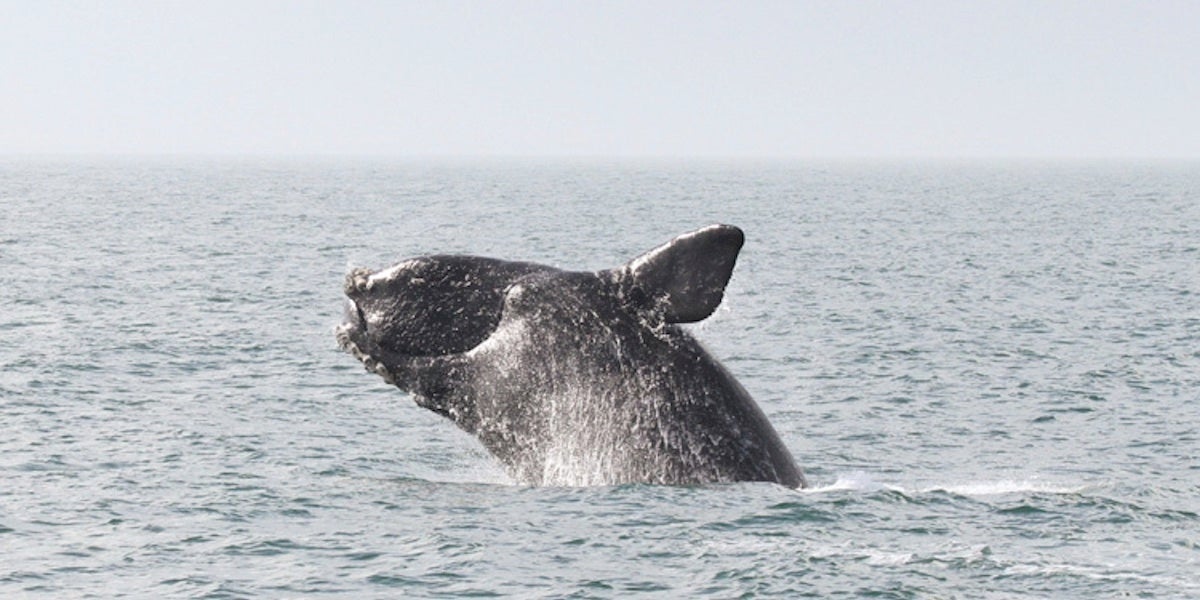 North Atlantic right whales are on the brink of extinction and Trump's offshore drilling plans could make things worse. NOAA

Despite vehement opposition from communities, businesses and lawmakers along the Atlantic coast, the National Marine Fisheries Service on Friday is expected to issue five permits, or Incidental Harassment Authorizations (IHA), that allow deafening
seismic surveys to search for offshore oil and natural gas in the Atlantic Ocean.

The
Trump administration’s move was first reported by Bloomberg, which said the IHAs allow five companies to use airgun blasting in waters off Delaware to central Florida.

During the seismic surveys, ships fire blasts of air to the bottom of the sea every 10 to 12 seconds for weeks or months at a time to map the contours of the ocean floor. The loud, continuous and far-reaching noise can damage the hearing and potentially disorientate and kill
marine life, displace fish, devastate zooplankton and cause whales to beach. Blasting can also impact commercial and recreational fishing by decreasing catch rates.

The permitting also comes at the heels of the
National Climate Assessment, which warned that human activities, predominantly the burning of fossil fuels, is causing rapid climate change.

Rep. Frank Pallone, Jr. (NJ-06), who is poised to assume the chairmanship of the House Energy & Commerce Committee in January, blasted the Trump administration’s approval of the permits.

“Seismic testing risks injuring and killing critically endangered species, severely disrupting economically important fisheries, and threatening the Jersey shore,” Pallone said on his
website. “An environmentally sound coast is critical to New Jersey’s economy and it is very possible that seismic testing could lead to oil and gas drilling off our coast—threatening public health, coastal communities, and hundreds of thousands of jobs. Members from both sides of the aisle will work tirelessly to fight this reckless decision by the Trump administration.”

BREAKING: Trump administration approves seismic testing permits for the Atlantic Coast. Seismic testing is both dangerous for marine life and a precursor to offshore drilling.https://t.co/7FTbICP1at

Environmental organizations were outraged at the news and vowed to fight the action.

“Just one week after issuing dire warnings on the catastrophic fallout of climate change to come, the Trump Administration is opening our coastlines to for-profit companies to prospect for oil and gas—and is willing to sacrifice marine life, our coastal communities and fisheries in the process,” said Michael Jasny, director of the Marine Mammal Protection Project at the
Natural Resources Defense Council, in a statement provided to EcoWatch.

“This is the first step towards drilling and scientists warn that seismic activity alone could drive the endangered North Atlantic right whale to extinction. We’ll stand with citizens, coastal businesses, scientists, lawmakers, and commercial and recreational fishermen who oppose seismic blasting, and we will fight this illegal action,” Jasny added.

Seismic airgun blasting has been proposed within the same main range of imperiled North Atlantic right whales. According to Bloomberg, the IHAs will block surveys during the calving season for the critically endangered species.

The five companies still must secure permits from the Interior Department’s Bureau of Ocean Energy Management before they can start, but those are expected under President Donald Trump’s plans for “energy dominance,” Bloomberg reported.

Seismic data has not been gathered in the mid- and south-Atlantic regions, from northern Florida to Delaware, for at least 30 years. In January 2017, the Obama administration denied six permits to conduct seismic surveys, concluding that airgun blasting was too risky.

“This is exactly how you push climate change past the point of no return,” Redman said in a
press release. “The Interior Department can still stop this madness, but they need to hear from every single person who is worried about climate change and every leader in Congress who claims to care about the future. Seismic testing is the first step toward economically devastating oil spills and climate disasters like flooding up and down the Atlantic coast. Stopping seismic testing is a must.”

The U.S. government released a report that warned climate change could kill thousands of Americans each year and slash the GDP by more than 10 percent by 2100. #SMH https://t.co/Yeik3hE2dn

Lawyers with the Southern Environmental Law Center (SELC) were similarly outraged by the news, noting that more than 200 local governments along the Eastern Seaboard have passed resolutions against offshore drilling and seismic testing. At least a dozen states have voiced opposition to offshore drilling.

“Permitting seismic blasting in the South Atlantic is completely out of touch with Southeast communities, business leaders, and elected officials who have consistently and overwhelmingly rejected offshore drilling and the seismic blasting that precedes it,” said Catherine Wannamaker, an SELC senior attorney, in a press release. “Seismic surveys not only pave the way for offshore drilling that no one wants here, but they also endanger whales, dolphins, and fisheries, and threaten coastal economies. Communities up and down the coast have made clear they do not support seismic blasting in the Atlantic, and they will continue to fight the Trump administration turning its back on them.”

Following today’s announcement, Oceana launched a new interactive map that displays near real-time activity of apparent seismic vessels in the so-called “Blast Zone.” Anyone can use the “We’re Watching” map, which uses the technology of Global Fishing Watch, to track the vessels.

“If these companies are allowed to begin seismic airgun blasting, our map gives the public near real-time access to the precise locations of vessels so that they know when, where and if these activities begin off our coast,” Diane Hoskins, campaign director at Oceana, said in a provided statement. “This interactive map is a powerful tool in the fight to protect Atlantic communities from offshore drilling.” 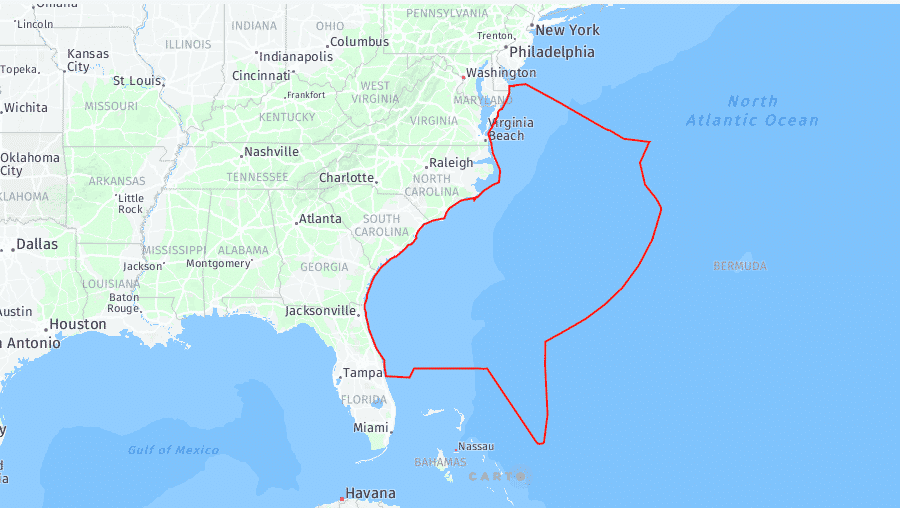 The red outline on the map refers to the “Blast Zone”—the area at risk of new seismic airgun blasting.Oceana

Note: This post has been updated to include Oceana’s map and statement.