‘Plastic, Plastic, So Much Plastic!’: Diver Films Sea of Trash Off Bali 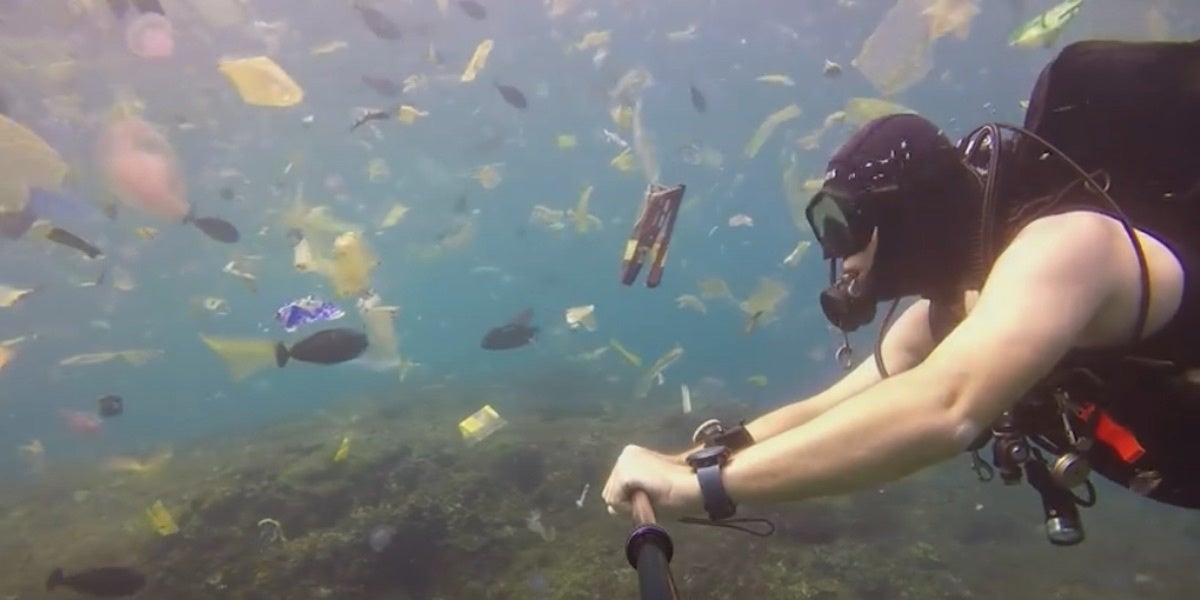 Manta Point is a cleaning and feeding station for Manta rays just off the shores of Nusa Penida in Indonesia. It attracts the creatures all year round, but the video shows a single ray in the background.

“Surprise, surprise, there weren’t many mantas there at the cleaning station today,” Horner observed. “They mostly decided not to bother.”

While the plastic trash was carried away by currents the next day, Horner noted the problem doesn’t simply go away.

“Plastic doesn’t really [break down] … it just breaks apart into smaller and smaller pieces,” he wrote. They become microplastics that become “coated in yummy algae that fish, turtles, etc., etc. love to eat. So these small/tiny pieces of plastic will be eaten even more, entering the food chain, along with the toxins they contain and have absorbed. That food chain, obviously leads up to us.”

Horner said the overuse of plastics, unnecessary packaging and single-use items needs to be reduced or eliminated. He also advocates for proper disposal and recycling of the material.

Plastic pollution is a worldwide epidemic but it’s the worst in Asia, where there are few collection and recovery systems. The worst countries at present are China, Indonesia, the Philippines, Vietnam and Sri Lanka. These five countries are responsible for up to 60 percent of the marine plastic entering our oceans, according to Stemming the Tide, a study from the Ocean Conservancy and McKinsey Center for Business and Environment.

Indonesia itself produces about 130,000 tons of plastic and solid waste per day, the Guardian noted, but only half reaches landfills. The remaining trash is either illegally burned or dumped into the country’s waters. But last year, the Indonesian government announced it will pledge $1 billion a year to curb ocean waste in its aim to reduce marine waste by 70 percent by 2025.

Experts project that by 2025, plastic consumption in Asia will increase by an astonishing 80 percent to surpass 200 million tons. And unless steps are taken to manage this waste properly, in ten short years the ocean could contain one ton of plastic for every three tons of fish.

The good news is that many local and international governments are stepping up to curb plastic waste. Earlier this month, Taiwan’s Environmental Protection Agency proposed an ambitious 12-year timeline to eliminate four types of single-use plastics—takeaway beverage cups, drinking straws, shopping bags and disposable tableware—by 2030. Chile prohibits the sale of single-use plastic bags in 102 coastal villages and towns. Kenya introduced a serious law that slaps a fine or even a jail sentence on anyone who manufactures, sells or even carries a plastic bag. Scotland has also announced plans to ban the manufacture and sale of plastic-stemmed cotton buds as well as plastic straws.

Also, let’s not forget that we can all do our part in reducing our plastic footprint.