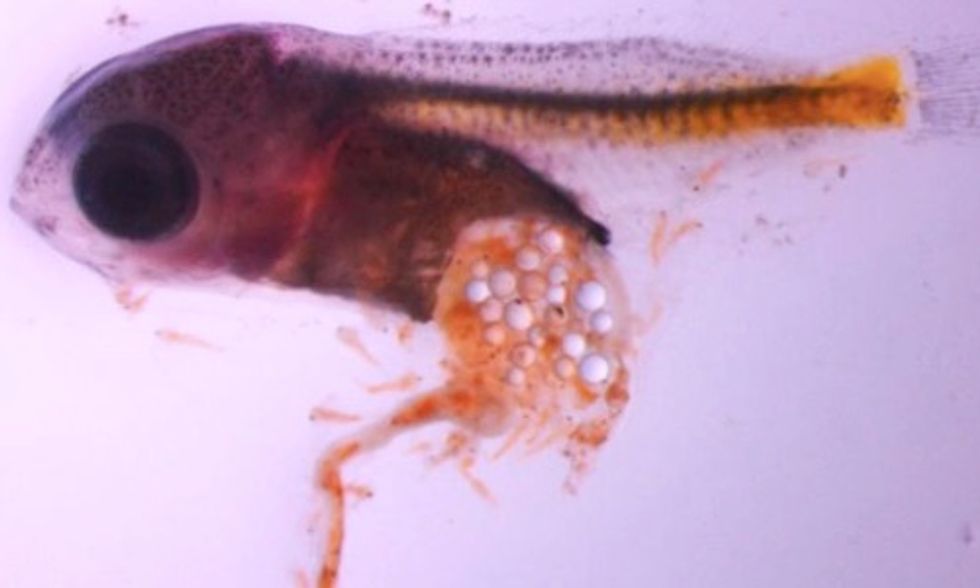 Researchers from Uppsala University in Sweden have found that young fish basically like eating microplastics as much as teenagers like eating fast food.

For the study, published this week the journal Science, European perch embryos and larvae from the Baltic Sea were placed into lab aquariums with varying levels of polystyrene microplastics, including concentrations currently seen in nature.

Alarmingly, the researchers discovered that larval perch living in high concentrations of microplastic particles preferred to eat plastic over plankton, which are their natural food sources.

“This is the first time an animal has been found to preferentially feed on plastic particles, and is cause for concern,” Peter Eklöv, co-author of the study, told the Guardian.

Lead author Dr. Oona Lonnstedt described that the fish were drawn to the plastic over real food.

"They all had access to zooplankton and yet they decided to just eat plastic in that treatment. It seems to be a chemical or physical cue that the plastic has, that triggers a feeding response in fish," Lonnstedt told BBC News.

"They are basically fooled into thinking it's a high-energy resource that they need to eat a lot of. I think of it as unhealthy fast food for teenagers, and they are just stuffing themselves."

When predators were introduced into the lab tanks, the perch exposed to microplastics were eaten by pike four times more quickly than their naturally-reared relatives. All of the plastic-exposed fish in the study were dead within 48 hours, the Guardian noted.

According to the study, exposure to microplastics also reduced rates of hatching and development into maturity. About 96 percent of the eggs successfully hatched in environments without microplastics, compared to 81 percent for those exposed to large quantities.

Roughly 8 million tons of plastic gets dumped into the world’s oceans every year. One study warned that there will be more plastic than fish in the ocean by 2050.

Because plastics are non-biodegradable, when large pieces enter our waterways, they eventually break down into smaller and smaller pieces, or microplastics. Incidentally, these tiny pieces of trash make up the bulk of the plastic soup in our waters, with the little pieces found in ice cores, across the seafloor, vertically throughout the ocean and on every beach worldwide. Fish and plankton often mistake these particles for food.

Lönnstedt warned that "if early life-history stages of other species are similarly affected by microplastics, and this translates to increased mortality rates, the effects on aquatic ecosystems could be profound.”

As EcoWatch mentioned previously, microplastics are also very absorbent, meaning they pick up the chemicals it floats in. So we don’t just have to worry about the plastic itself that the fish are eating but all of the contaminants in that plastic as well. That goes for us, too, if we eat a fish that’s eaten plastic particles.