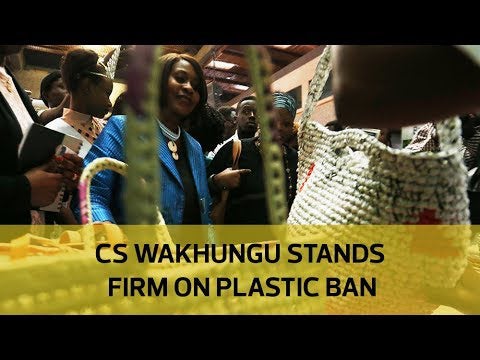 Kenya is taking its new plastic bag ban very seriously. Starting Monday, anyone who manufactures, sells or even carries a plastic bag in the East African country could be slapped with a fine of up to $38,000 or get sent to jail for up to four years.

It took the Kenyan government three attempts over the past 10 years to finally pass the ban, which is considered as the world’s toughest, according to
Reuters.

Government officials say that non-biodegradable items harm the environment, use up valuable resources and can impact human health.

“Plastic bags now constitute the biggest challenge to solid waste management in Kenya. This has become our environmental nightmare that we must defeat by all means,” Kenya’s environment minister Judy Wakhungu told the BBC.

Kenyans use an estimated 24 million plastic bags per month.

“If we continue like this, by 2050, we will have
more plastic in the ocean than fish,” Habib El-Habr, an expert on marine litter working with the U.N. Environment Programme in Kenya told Reuters.

Plastic bags, El-Habr said, take 500 to 1,000 years to break down and can enter the human food chain if fish or other livestock ingest the items.

In Nairobi slaughterhouses, some beef cows can accidentally consume up to 20 bags. “This is something we didn’t get ten years ago but now its almost on a daily basis,” county vet Mbuthi Kinyanjui told Reuters.

Manufacturers worry that the ban could threaten jobs, however Wakhungu countered that “thousands of jobs [are] going to be created” from making reusable bags or ones from sustainable materials.

Under the new law, police can target anyone even carrying a plastic bag. But Wakhungu said enforcement will initially target manufacturers and suppliers.

“Ordinary wananchi [the common man] will not be harmed,” she told Reuters.

The BBC reported that some Nairobi supermarkets have already adjusted to the new law by selling fabric bags for 10 Kenyan shillings (10 U.S. cents).

Those traveling to Kenya with duty-free plastic shop bags will have to leave them at the airport, the National Environmental and Management Authority said.

Kenya joins a
growing movement of governments enacting laws against the disposable products. About 40 other countries including China, France, Rwanda and Italy have banned, partly banned or taxed plastic bags.