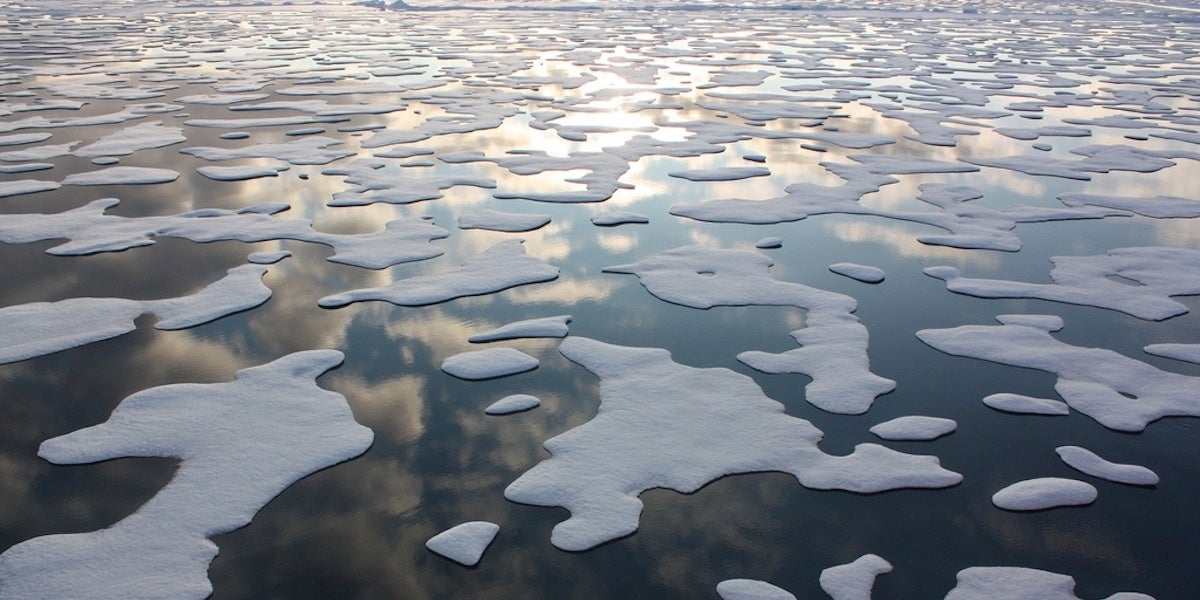 But here’s the ultimate irony: Hilcorp Alaska‘s project—which involves building a 9-acre artificial drilling island in the shallow waters of the Beaufort Sea—has been delayed because of the effects of climate change, Alaska Public Media reported.

Hilcorp’s
Liberty Energy Project requires land-fast sea ice, or ice that’s attached to the coastline each winter, as a foundation for the artificial island. The process involves pouring gravel through holes in the ice and through the water column to the sea floor and building the island structure from the bottom up.

But the region’s unusual warmth has caused ice to form later and break up earlier, Andy Mahoney, a sea ice researcher at the University of Alaska Fairbanks, explained to Alaska Public Media.

That means that the ice isn’t simply thick enough to transport the construction materials. “To safely transport gravel offshore in the Arctic, the ice along the route of the ice road must be of adequate thickness,” a spokesman for the Bureau of Ocean Energy Management (BOEM), which oversees offshore leasing, told the Guardian. “Over the last few years, that thickness has not developed until unusually late in the season.”

Hilcorp initially thought it would only need one year to build the gravel island, but now it is saying it could take two years to complete the project, Alaska Public Media reported.

In October, Interior Secretary
Ryan Zinke touted that Hilcorp’s oil and gas project was a part of his plan for “American energy dominance.”

But environmentalists worry that it will further stress the increasingly fragile region. The Arctic is warming at a rate
twice as fast as the rest of the globe. In recent years, we’ve seen more ice melting each summer, and less ice forming each winter. As EcoWatch mentioned previously, this past Arctic winter was the warmest on record, and the high temperatures likely affected the thickness of the area’s ice. Arctic sea ice hit its second-lowest winter peak in the 39-year satellite record, measuring 14.48 million square kilometers on March 17—or just 60,000 square kilometers larger than the 2017 record, and 1.16 million square kilometers smaller than the 1981-2010 average.

An oil spill in the sensitive Beaufort Sea could also threaten polar bears and Arctic communities.

“Opening the Arctic to offshore oil drilling is a disaster waiting to happen” and will also be dangerous for the climate, Kristen Monsell, the Center for Biological Diversity‘s ocean legal director, said in press release emailed to EcoWatch. “This project sets us down a dangerous path of destroying the Arctic. An oil spill in the Arctic would be impossible to clean up and the region is already stressed by climate change.”

“We’ll keep fighting this project and any new ones that follow. We won’t passively watch the oil industry and this inept administration harm Arctic wildlife and leave a legacy of climate chaos,” Monsell concluded.