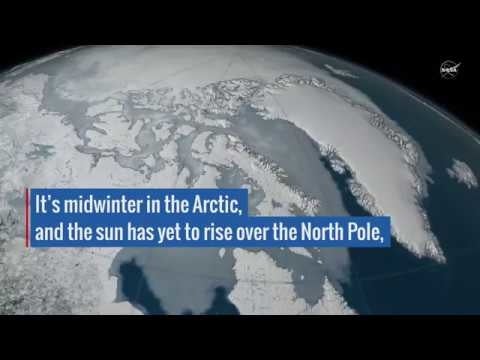 The Arctic just experienced its warmest winter on record, scientists say. In the dead of winter, temperatures at the North Pole approached the melting point, the National Snow and Ice Data Center (NSIDC) in Boulder, Colorado found.

Several areas in the Arctic have reported record-high heat. As the AP reported, Cape Morris Jesup, in the northernmost point of Greenland, saw temperatures normally seen in May. Not only that, 15 different Arctic weather stations clocked temperatures 10 degrees above normal .

Data from climatologist Brian Brettschneider of the International Arctic Research Center at the University of Alaska Fairbanks show that the Arctic Circle in Barrow, Alaska, was 18 degrees Fahrenheit warmer than normal in February, and the entire winter, which spans from December to February, averaged 14 degrees above normal.

Utqiaġvik (Barrow) running 180-day temperature departure from normal. I recomputed new 30-year normals beginning at the start of each decade. [Note: 1921-1950 data used to compute normals for 1951-1960, and so on …] @AlaskaWx @CinderBDT907 pic.twitter.com/0jvdPD7YvC

NASA remarked that temperatures have soared in the Arctic for the fourth winter in a row: “The heat, accompanied by moist air, is entering the Arctic not only through the sector of the North Atlantic Ocean that lies between Greenland and Europe, as it has done in previous years, but is also coming from the North Pacific through the Bering Strait.”

The region also experienced record-low sea ice for this time of year, with open water areas expanding rapidly in the Bering Sea off Alaska’s west coast.

The sea ice should be thick and strong this time of year, but it’s so low that there is now an unprecedented pathway.

“There is now connected open water from the Bering Sea into the Chukchi,” tweeted Rick Thoman of Alaska’s National Weather Service. “You could sail you[r] boat to north of the Arctic Circle. In February. Through the Bering Strait. Think about it.”

And notice on the hi resolution @NWSAlaska analysis, there is now connected open water from the Bering Sea into the Chukchi to 67N. You could sail you boat to north of the Arctic Circle. In February. Through the Bering Strait. Think about it. #Arctichttps://t.co/wxkjilKrDD