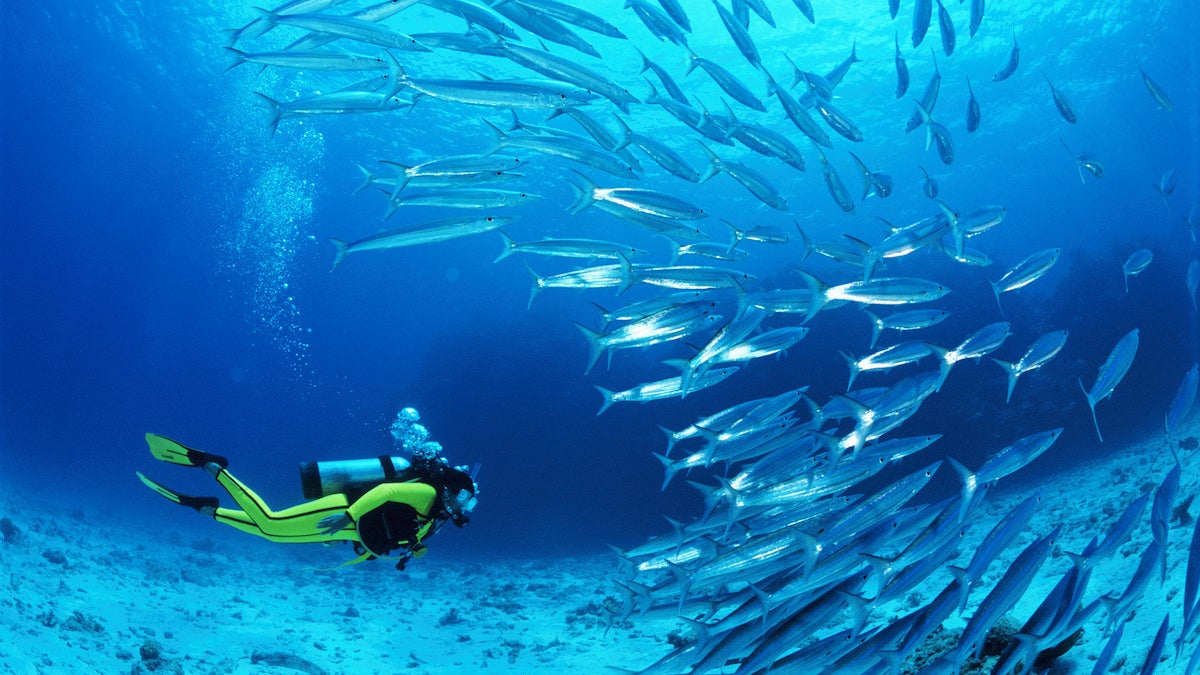 A diver swims with sharpfin barracuda, one of the many ocean species under threat from global warming, in Australia, Queensland, Great Barrier Reef. Pete Atkinson / The Image Bank / Getty Images Plus

The oceans could look much emptier by 2100, according to a new study that found that most fish species would not be able to survive in their current habitat if average global temperatures rise 4.5 degrees Celsius by the end of the century, as The Guardian reported.

The researchers of the new paper said that 60 percent of fish species face a grave threat from global heating if temperatures approach that worst-case scenario level. The species under threat include many common fish found in grocery stores, including staples like Atlantic cod, Alaska pollock and sockeye salmon, and sport fishing favorites like swordfish, barracuda and brown trout, as CNN reported.

The new study, published in the journal Science, looked at how nearly 700 fresh and saltwater fish species respond to warming ocean temperatures. The problem for most fish is that as ocean temperatures rise, the oxygen level goes down, which makes it extremely challenging for embryos to survive.

“A 1.5C increase is already a challenge to some, and if we let global warming persist, it can get much worse,” said Hans-Otto Pörtner, a co-author on the paper and a climatologist at the Alfred Wegener Institute, Helmholtz Centre for Polar and Marine Research in Germany, as The Guardian reported.

That 1.5 degrees Celsius threshold would result in 10 percent of marine species suffering over the next 80 years, including the aforementioned grocery staples.

However, even a 10 percent decline in fish species has a large ripple effect on ecosystems as one species being pushed out effects the food supply and the habits of many other species that have evolved to be interdependent.

“More than half of the species potentially at risk is quite astonishing, so we really emphasize that it’s important to take action and follow the political commitments to reduce climate change and protect marine habitats,” said Dr. Flemming Dahlke, a marine biologist at Germany’s Alfred Wegener Institute and one of the authors of the study, as CNN reported.

The declining oxygen levels threaten fish because adult fish preparing to mate fill up their bodies with either eggs or sperm, which strains their hearts as they pump more blood to supply their reproductive organs with enough oxygen, according to the Daily Mail.

Also, fish embryos inside eggs could also die since they don’t have gills — meaning they will be unable to get enough oxygen to survive.

“There’s a difference in the tolerable temperature range of almost 20 degrees on average between embryos and adults,” Dahlke said, as CNN reported. “This of course makes a big difference when you want to look at the sensitivity of species to global warming.”

The rapid increase in temperatures could force fish to adapt in an unprecedented way or to move toward cooler water closer to the poles. Freshwater fish living in lakes and ponds have a bleak outlook since they cannot move towards cooler waters.

“Some species might successfully manage this change,” said Dahlke, as the Daily Mail reported. “But if you consider the fact that fish have adapted their mating patterns to specific habitats over extremely long time frames, and have tailored their mating cycles to specific ocean currents and available food sources, it has to be assumed that being forced to abandon their normal spawning areas will mean major problems for them.”

A lot of this is a conservative estimate since the study did not take into account pollution or the increased acidity of the ocean, which could present additional challenges to sensitive species, as The Guardian noted.

“Some tropical fish are already living in zones at their uppermost tolerance, their areas are already 40C,” Pörtner said. “Humankind is pushing the planet outside of a comfortable temperature range and we are starting to lose suitable habitat. It’s worth investing in the 1.5C goal.”