How Norway Convinced Drivers to Switch to Electric Cars 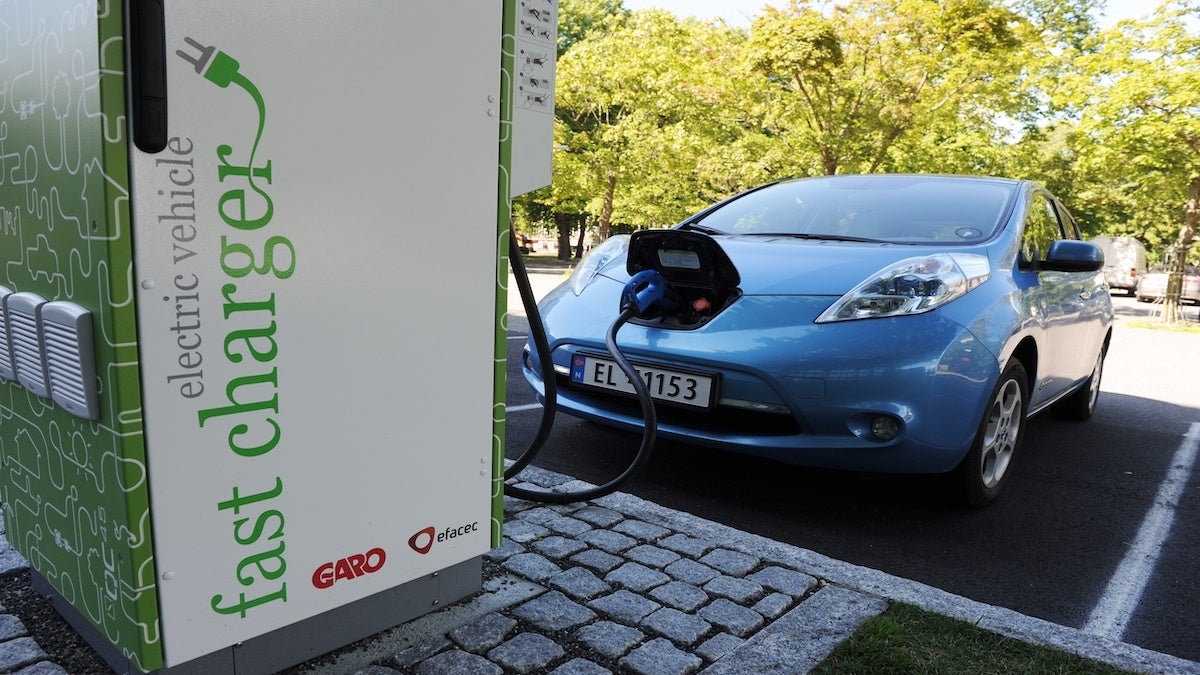 Americans love their cars — their gas-guzzling, air-polluting, smog-producing cars. Although the vast majority agree that if we all drove electric vehicles we could reduce oil consumption and pollution, only a third would consider buying one anytime soon. Far fewer are actually making the switch.

The adoption of all-electric and plug-in hybrids has been steadily creeping up over the last decade, yet electric cars make up only about 2% of new car sales in the U.S.

Compare that to the situation in Norway, the world’s unofficial leader in EV driving, where more than 40% of new cars sold are now electric and thousands of drivers are on waiting lists for the latest models. It’s a trend 30 years in the making.

“These things take time, because you need those first guys willing to break the mold, buy an EV and tell their pals, ‘Shut up, this car is awesome!'” said Daniel Milford Flathagen, 36, from Trondheim, a government agency employee who waited 18 months for a Hyundai Kona Electric, his second electric vehicle.

Norway, a small, largely rural country with a population of just 5 million, has been steadily building hype for electric cars. Given their significantly larger populations, China and the U.S. report higher total sales numbers (around 1.2 million and 360,000, respectively, including plug-in hybrids, in 2018). The Scandinavian nation has the highest share of new electric vehicle purchases in the world.

Credit for this could go to an evolved cultural acceptance of functional electric cars over more “macho” gas-guzzlers, or Norway’s long-held reputation as a nature-loving, environmentally friendly population. But there’s a more direct, prosaic explanation: In Norway, it pays to drive electric.

“The environmental aspect is a very good bonus for everyone,” said Elisabeth Sakkestad, a 32-year-old EV user who works for an aid organization in Stavanger. “You feel better about driving an electric car than a fossil-fueled one.”

But it is what Sakkestad described as the “economic benefits” that have played by far the greatest role in persuading her — and huge swaths of the population — to switch to emissions-free vehicles.

Successive Norwegian governments from across the political spectrum have been offering financial incentives to electric car owners as part of their wider efforts to reduce greenhouse gas emissions. And, as electric vehicles have become increasingly advanced in terms of speed, range and aesthetics, growing numbers of consumers have become motivated to cash in on the perks.

“In Norway we tax what we don’t want and we promote what we want, and the consumer has, in this way, actually the opportunity to make the right choice,” said Christina Bu, secretary-general of Norsk elbilforening, the Norwegian EV Association.

In Norway, most cars are imported. On top of the regular 25% consumption tax (Value Added Tax, or VAT) charged on most consumer goods, all vehicles used to be subject to an additional purchase tax. But that tax was scrapped for electric cars in 1990. EV buyers also became exempt from paying VAT in 2001. A few years later, they scored a fast-track commute when they were given permission to drive in bus lanes.

Until 2017, EV owners were exempt from charges for toll roads and eligible for free parking. Current rules allow municipalities to charge them no more than 50% the standard toll and parking rates.

The center-right governing coalition in Norway has promised to keep most of the incentives running until at least 2021 and aims to ban all new sales of gas-powered cars by 2025.

In Norway, as everywhere, electric cars tend to be pricier than their conventional counterparts. Bloomberg analysts predict price parity in 2022, but Norway’s tax breaks mean that in some cases greener models are already cheaper. The base import price for a Volkswagen e-Golf, for example, is around ,000, compared to ,000 for a regular Golf. But after VAT, emissions taxes and other fees, the electric version is nearly ,000 less (,300 versus ,200).

“Buying a new electric car is more or less the same price as buying a nice petrol or diesel car now,” said Bu, even before you factor in additional savings such as not having to pay for gas and lower maintenance costs.

Some critics have argued that the country’s incentives favor those who are already wealthy enough to afford new cars, while low-income owners can often only afford used gas-fueled models, which remain cheaper than used EVs.

Ask Ibsen Lindal, energy spokesperson for Norway’s Green Party, sees the second-hand market for gas cars as an impediment to the nationwide trend toward electric cars, but he said he hopes it’s just a matter of time until EVs become affordable for virtually all Norwegians.

“What’s been the most important goal of the Norwegian electric car incentive is that … you hope to start the market moving, and then prices will fall and that is what we are seeing now within a very short time,” Isben Lindal said.

He said he expects that in three to five years, EVs will push nearly all new gas-powered cars out of the Norwegian market.

Globally, analysts worry about how electric vehicle sales will fare with the coronavirus pandemic shaking consumer markets and oil prices plunging. One new report predicts worldwide EV sales will tank in 2020, a factor it partly pegs to global uncertainty, which may make people less willing to take a chance on technology that’s new to them.

How quickly other countries around the world might catch up with Norway’s incentivized buying is an ongoing debate in the electric vehicle industry.

Bu said she accepts that it is “probably politically very difficult” for most governments, including in the U.S., to introduce the type of wide-ranging tax differences for electric and fossil-fuel-powered cars that Norway has used.

“I think we will see different countries following faster than the others, but interest is growing,” she said. “We definitely will start seeing the same development in country after country.”

In Sweden, EV buyers get a bonus of up to 60,000 Swedish krona (roughly ,000) paid to them six months after their purchase, while Germany recently expanded its subsidies to a similar amount, as long as owners keep their car for at least nine months. Costa Rica, which has committed to going carbon neutral by 2050, exempts electric car owners from its regular 13% sales tax on vehicles.

In the U.S., the federal government has boosted EV sales by offering a ,500 tax credit to buyers. But that amount phases down once manufacturers sell 200,000 cars; Tesla has already hit the threshold for all its models, as has the Chevrolet Bolt. In December, Congress declined to expand the federal credit program.

Nearly every state and Washington, D.C., offers some incentives for buying an electric vehicle. But while the majority of Americans support the idea of tax breaks or other incentives, and even those who aren’t actively considering buying an EV say such a break would encourage them to do so, eight out of 10 of people don’t know whether any are available in their state, according to one 2019 poll.

Such anxieties persist among consumers even though today’s EVs generally have enough range to handle most drivers’ daily travel. The average American drives less than than 30 miles a day, according to the U.S. Department of Transportation, while more than half a dozen electric models now get over 200 miles on a single charge.

When it comes to charging infrastructure, Norway is miles ahead. It has been rapidly increasing the availability of charging points and electricity supply since 2015, when the government set the goal of having at least one fast charging station every 31 miles on major highways, offering subsidies to providers in order to accelerate installations. By mid-2017, there were more than 1,500 stations along these key routes, up from 300 in 2014.

The country was also the first in the world to introduce supercharger points, where more than two dozen vehicles can charge at the same time. The capital, Oslo, is working with housing cooperatives to install thousands more charging points outside people’s homes, and it has started a program that provides wireless charging for its taxi network.

Environmental activists like Ibsen Lindal argue that Norway still isn’t quite keeping up with demand. He said that although Oslo has gained a reputation as something of a trailblazer when it comes to charging infrastructure, other cities and municipalities are further behind.

Nationwide, there were about 1.7 electric vehicles per charging point in 2011, compared with around 19.5 today. Ibsen Lindal said that while hard data is limited, anecdotal evidence suggests some electric car users who are frustrated with the current infrastructure may be returning to fossil-fueled vehicles for convenience.

“There have been some reports on people buying electric cars, but then after a few months, they say that there are too many people in line waiting at charging stations, making EV ownership impractical for some people today,” he said.

Trondheim EV-owner Flathagen said he has observed long queues at some rural stations and met customers, usually elderly people, who “aren’t really prepared for how rapid charging differs from getting gas at a petrol station” or how to use some of the other necessary related technologies, such as apps or SMS messages to pay for electricity. (Norsk ebilforening’s research suggests that while early adopters tended to be young, educated men, a much wider range of consumers are now buying the vehicles, including increasing numbers of women and people over 50 years of age.)

Geir Kulia, a 28-year-old in southern Norway who recently bought an electric BMW i3, admitted that while it’s been surprisingly easy to charge his car, “the planning phase is a bit more important” when it comes to longer trips. “There is a limit to your freedom; you have to consider where to charge and the time it takes to charge, so you can’t just go off driving around Europe.”

For Americans with range anxiety, Flathagen said that although Norway is far smaller than the United States, in some ways it’s a perfect proving ground.

“It’s a rural country with a cold climate, where people drive longer distances than most other European countries,” he said. (Cold weather saps batteries faster.) “If EVs work here, they should work everywhere.”

This story originally appeared in HuffPost and is republished here as part of Covering Climate Now, a global journalism collaboration strengthening coverage of the climate story.