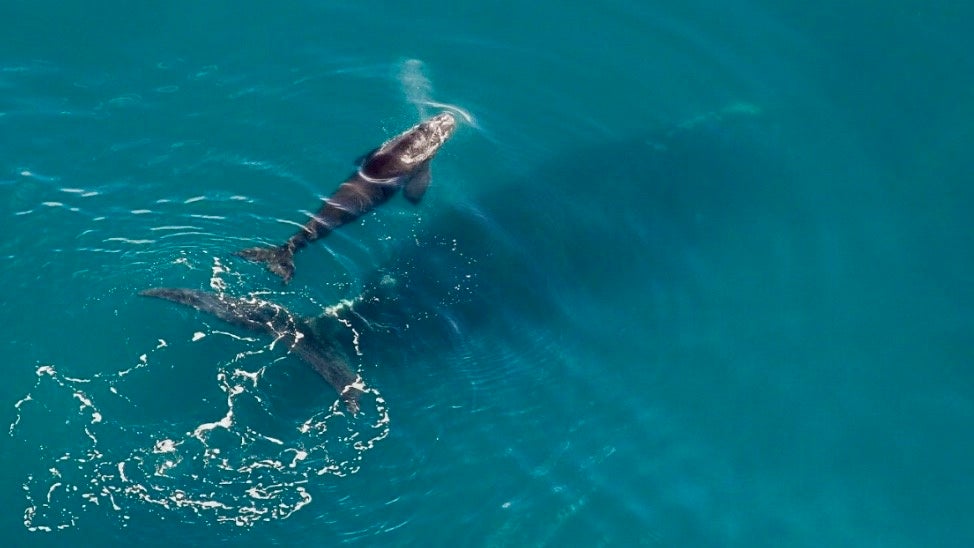 A North Atlantic right whale was spotted with her calf in a first of the season event. NOAA permit # 20556-01 / Clearwater Marine Aquarium

The first critically endangered North Atlantic right whale calf of the season has been spotted off the coast of Georgia, a Daytona Beach News-Journal story published by USA Today reported Wednesday.

“The mother is a known animal to biologists and this is believed to be her first calf!” the aquarium tweeted.

EXCITING NEWS! Our team has spotted the first right whale calf of the season off the coast of Georgia. The mother is a known animal to biologists and this is believed to be her first calf!

The sighting of North Atlantic right whale calves is such a big deal because they are an extremely endangered species of whale. There are currently only 409 left, the North Atlantic Right Whale Consortium estimates, and that number has fallen from more than 450 in 2016.

“North Atlantic right whales are in serious trouble,” NOAA Fisheries right whale biologist Barb Zoodsma said in a press release. “We have lost 30 right whales in U.S. and Canadian waters since 2017. The number of right whale deaths is unsustainable for a population of a little more than 400 animals, particularly because we estimate that there are only about 100 breeding females who are producing fewer calves each year.”

Every winter, the whales migrate more than 1,000 miles down the East Coast of North America from Canada and New England to South Carolina, Georgia and Florida. The waters off the Southern U.S. are the only place where they are known to calve.

“These southern waters are where right whales give birth and nurse their young. This is a vulnerable phase for right whales, making it extremely important for people to be aware of the whales’ movement and migratory patterns,” Florida Fish and Wildlife Conservation Commission wildlife biologist Tom Pitchford told NOAA.

In 2017-2018, not a single right whale birth was recorded, according to The Associated Press. The situation improved somewhat in 2018-2019, when seven births were recorded. But this couldn’t make up for the fact that 10 whales were discovered dead in 2019, three after being struck by ships and one after getting tangled in fishing equipment. Many of the dead whales were breeding females, the Daytona Beach News-Journal reported.

The latest calf was spotted off Sapelo Island, which is around 50 miles south of Savannah, Georgia, The Associated Press reported. The mother was identified as #3560 in the New England Aquarium Right Whale catalog, according to the Daytona Beach News-Journal. She was born in 2005.

Right whales can grow to be more than 50 feet long and weigh 70 tons. They are most threatened by collisions with ships, being caught in fishing gear and changes to their feeding areas as oceans warm because of the climate crisis.