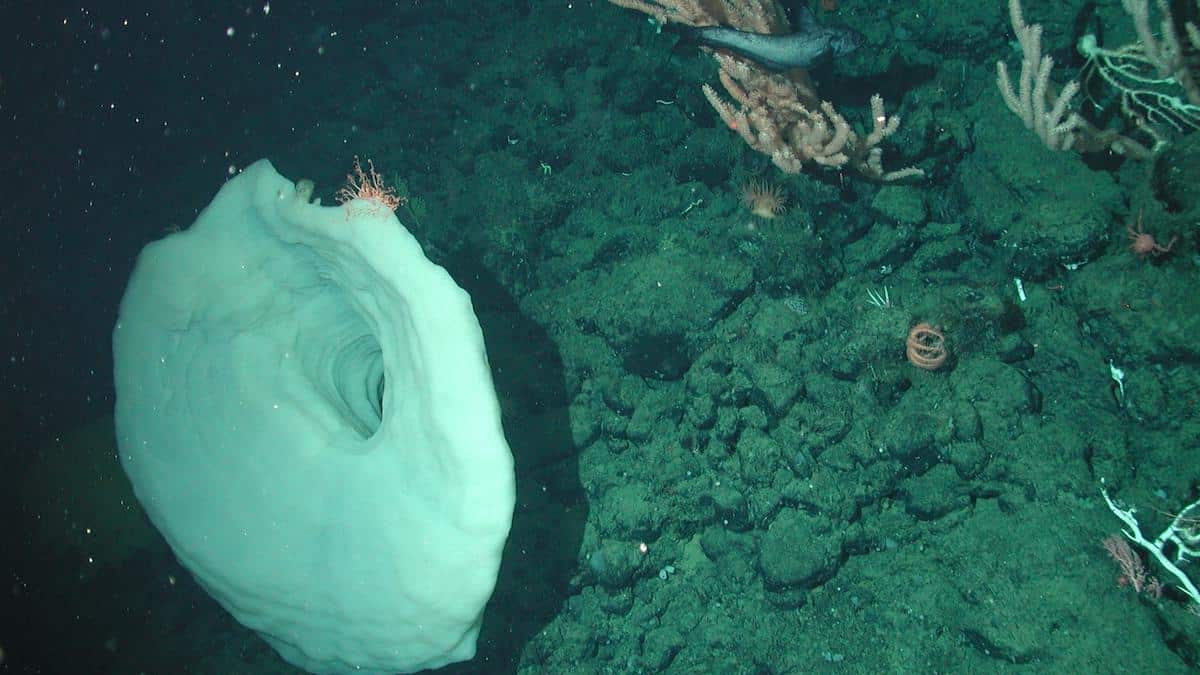 Bamboo coral and white trumpet sponge on the Davidson Seamount in the Pacific Ocean. NOAA

Do we really need to put ocean ecosystems at risk in order to transition to a renewable-energy economy? Proponents of deep-sea mining claim that the as-yet-untested practice is the best means of supplying minerals like cobalt, lithium, nickel, copper, vanadium and indium used in electric vehicles, storage batteries and other green technologies.

But a new article published in Frontiers in Marine Science on Thursday challenges this view. The team of experts from the University of Exeter, Greenpeace Research Laboratories and Globelaw instead says that human societies can both preserve marine biodiversity and eschew fossil fuels by making different choices about how new technologies are designed and used.

“If businesses, researchers and members of the public work collaboratively we have the means to achieve a future in which technology can be designed and manufactured to be sustainable and not involve extracting additional non-renewable resources,” study lead author Kathryn Miller told EcoWatch in an email. “It will require changes in behaviour but it is possible.”

Thursday’s paper builds on two previous studies from the same research team considering the risks of mining minerals from the sea bed. The first, published in 2018, focused on the environmental risks posed by disturbing ecosystems where many species are still unknown to science. The second, also from 2018, looked at how the deep sea bed should be governed and regulated for the benefit of all people, not just the profit of wealthy corporations in the global North. The new paper also addresses these issues, but emphasizes how the green transition might proceed without seabed minerals.

Specifically, the researchers considered the case of electric vehicle batteries.

“[T]he point we make in the paper is that estimates of future demand for minerals… always depend on a set of assumptions about how we will live and which technologies will be available,” study co-author David Santillo told EcoWatch in an email, “and we have to remember that neither of those things are fixed.”

For one thing, those projections assume the use of the current lithium-ion battery that incorporates cobalt or nickel. However, there are already alternatives either in use or in development, such as Svolt’s cobalt-free lithium-ion car battery or Tesla’s lithium-ion phosphate batteries.

For another, mineral needs depend on the sustainability of both transportation systems and technological design. A move away from a one-person-one-car model and towards improved metal recycling could significantly reduce the demand for novel mineral resources.

“I challenge the assumption that we need to continue producing and consuming technological products at the rate at which we have become accustomed over the past decade or more,” Miller said. “For example, I think that the premise that it will be necessary to replace every ‘conventional’ petrol or diesel car with an electric car is not forward thinking or sustainable – it will not solve the problems we are beginning to see in terms of resource availability, energy use and congestion in towns and cities.”

The reason that the necessity of deep-sea mining is such an important question is because of what is at stake if the practice goes ahead.

“Any commercial deep-sea mining activity at any scale will cause irreversible damage to deep-sea ecosystems,” Miller said. “Recovery of species in deep-sea habitats is extremely slow – centuries or millennia in many cases.”

If mining occurs, species could be harmed by noise and light pollution, habitat fragmentation and sediment plumes that could spread for hundreds of kilometers.

In addition, scientists don’t yet know all of the species that exist in deep-sea ecosystems, or how deep-sea animals like cold water corals, crabs and shrimps would be impacted. They also don’t know how closely deep water ecosystems are connected to the rest of the ocean.

Furthermore, the practice could threaten many of the ecosystem services that the ocean provides to human communities. There are fish species that spawn in seamount ecosystems, and cultures that consider ocean life to be sacred. While deep-sea mining may be justified based on the need to shift the energy system away from fossil fuels, it could actually harm the ocean’s ability to help us fight climate change by threatening its ability to sequester carbon, though again more research is needed to understand exactly what the consequences of mining would be on the carbon cycle.

“There is certainly the potential for the disturbance of deep-sea sediments by mining to disrupt their role in storing and locking away carbon over long time-scales, thereby putting more carbon into open cycles in ecosystems (including into seawater and the atmosphere) and harming the processes by which those sediments normally act as carbon sinks,” Santillo said.

The paper comes at an urgent moment in the debate over whether or not deep-sea mining should proceed. At the end of June, the island nation of Nauru announced plans to start mining, as The Guardian reported at the time. This triggered something called the “two-year rule,” which gives the UN’s International Seabed Authority two years to finalize regulations for the practice.

Nauru is acting on behalf of Canadian mining company DeepGreen, which hopes to mine nodules containing manganese, nickel and cobalt for electric vehicles. On the other side stand more than 530 marine science and policy experts, business leaders and conservation groups like WWF who are calling for a global moratorium on deep-sea mining until its impacts can be more fully researched and understood.

Such a global pause would make it impossible for anyone to be granted a license to mine, mirroring the global moratorium on whaling or mining in Antarctica. WWF’s senior global ocean governance and policy expert Jessica Battle told EcoWatch that Nauru’s ultimatum made such a moratorium “even more imperative.”

“It has happened before and it can happen again,” Battle said.

While so far no nation has stood up in the proper forum and called for a global pause, Battle has hope that this will happen before the two-year clock stops ticking, in part because there are so many new studies coming out warning about mining’s potential impacts on the ocean. While many polluting industries are well into the process of eradicating species and altering Earth systems, deep-sea mining is still only an idea.

“This one we can actually be smart as a society to prevent from the beginning,” Battle said, “so why the rush?”

Miller and Santillo said they also supported a moratorium on the practice, but ultimately their paper argued for changing how decisions about Earth’s resources are made. This means recognizing “Rights of Nature,” considering the ocean itself as an entity with rights rather than a resource to be used.

“A true transition from ownership to guardianship of the natural world could include a Rights of Nature approach to the ocean, rather than only considering the benefits that it may deliver to a small percentage of the global population,” the study authors wrote.