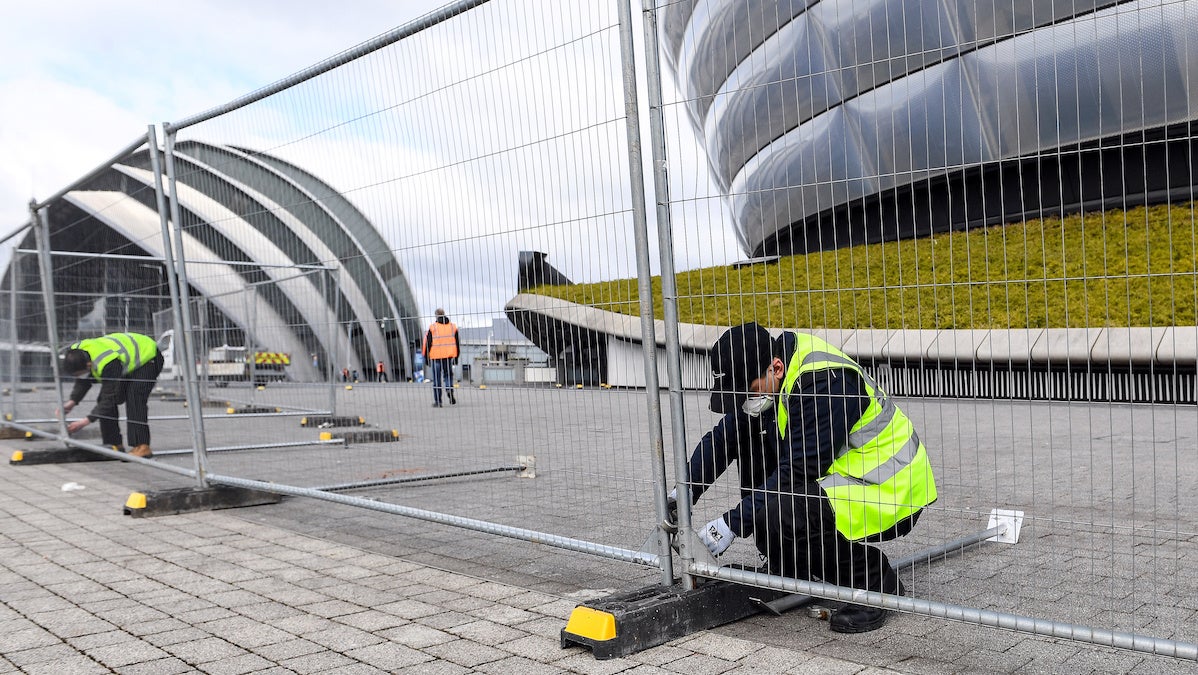 Workers convert the Scottish Events Campus, where COP26 was to be held, into a field hospital to treat COVID-19 patients. ANDY BUCHANAN / AFP via Getty Images

The most important international climate talks since the Paris agreement was reached in 2015 have been delayed because of the coronavirus pandemic.

At the 26th Conference of Parties (COP26), originally scheduled for November of this year in Glasgow, the world’s nations were expected to up their emissions reduction pledges. Now, the conference is being pushed into 2021 and the building that would have hosted it is being converted into a field hospital to treat patients with COVID-19, The New York Times reported.

“The world is currently facing an unprecedented global challenge and countries are rightly focusing their efforts on saving lives and fighting COVID-19,” COP26 President-Designate and UK Secretary of State for Business, Energy and Industrial Strategy Alok Sharma said in an announcement from the UK government Wednesday. “That is why we have decided to reschedule COP26.”

This decision has been taken jointly by the COP Bureau of the @UNFCCC with the UK and partners Italy.

Tackling climate change remains a key priority for the UK and the international community.https://t.co/480CKVV3E1 pic.twitter.com/ugTAXt9iVT

The decision to postpone the talks was made following a virtual meeting by representatives of the COP Bureau of the United Nations Framework Convention on Climate Change (UNFCCC); the UK government, which is hosting the talks; and the Italian government, which is partnering with the UK. Exact dates for a new conference in 2021, also set to take place in Glasgow, will be determined later.

The move delays a key step in the Paris agreement process, The New York Times explained. Under that agreement, countries pledged to keep global warming to well below two degrees Celsius above preindustrial levels by setting and meeting voluntary greenhouse gas emissions targets. But current emissions put the world on a path towards more than three degrees Celsius of warming, scientists say, which increases the risk of extreme weather events and coastal flooding from sea level rise.

The Paris agreement requires countries to adjust their pledges every five years, and it was hoped that countries would step up to the first such deadline in November with more ambitious promises to cut their carbon pollution.

Some climate activists now fear that the delay in talks could hurt this momentum. Christiana Figueres, who managed the Paris agreement process, was one advocate who argued against the delay, according to The Guardian. On Wednesday, she accepted its inevitability, but argued it must not become an excuse to lessen ambitions.

“Emissions must peak this year if we want to limit warming to 1.5C and the Paris agreement set the COP26 summit as the moment when all countries would ramp up their targets in line with the steep emissions decline we need to see in this decisive next decade,” she said.

But other advocates see two silver linings in the delay. The first is the chance that, by the time the rescheduled talks take place, the U.S. might have a new president.

In a March 26 talk organized by climate litigation charity Plan B on responding to the climate crisis in the context of the coronavirus pandemic, former Chief Scientific Advisor to the UK Government Sir David King explained that many thought the U.S. under President Donald Trump had merely withdrawn from the COP process.

“Far from it,” he said. Instead, the U.S. delegation spent all of December’s COP25 climate talks in Madrid working to derail climate action. If Trump does not win reelection in November 2020 and the talks are held in mid 2021, as BBC News projects, that would mean new U.S. leadership.

The other hope is that delayed talks would come as countries are moving to stimulate their economies after months of lockdown and could therefore help steer recovery in a more climate friendly and environmentally just direction.

This was the hope expressed by UN Climate Change Executive Secretary Patricia Espinosa.

“COVID-19 is the most urgent threat facing humanity today, but we cannot forget that climate change is the biggest threat facing humanity over the long term,” she said. “Soon, economies will restart. This is a chance for nations to recover better, to include the most vulnerable in those plans, and a chance to shape the 21st century economy in ways that are clean, green, healthy, just, safe and more resilient.”

Soon, economies will restart. This is a chance for nations to recover better, to include the most vulnerable in those plans, and a chance to shape the 21st century economy in ways that are clean, green, healthy, just, safe and more resilient.

“The pandemic will also reorder to an extent the priorities for COP26, as alongside the UN climate process countries will be devising stimulus packages for economies hard-hit by the crisis,” Turner told BBC News. “With low-carbon stimulus as a new priority for COP26, it should be seen as an opportunity to rebuild economies hit by coronavirus in ways that are healthier, more resilient to future shocks and fairer to a wider range of people.”