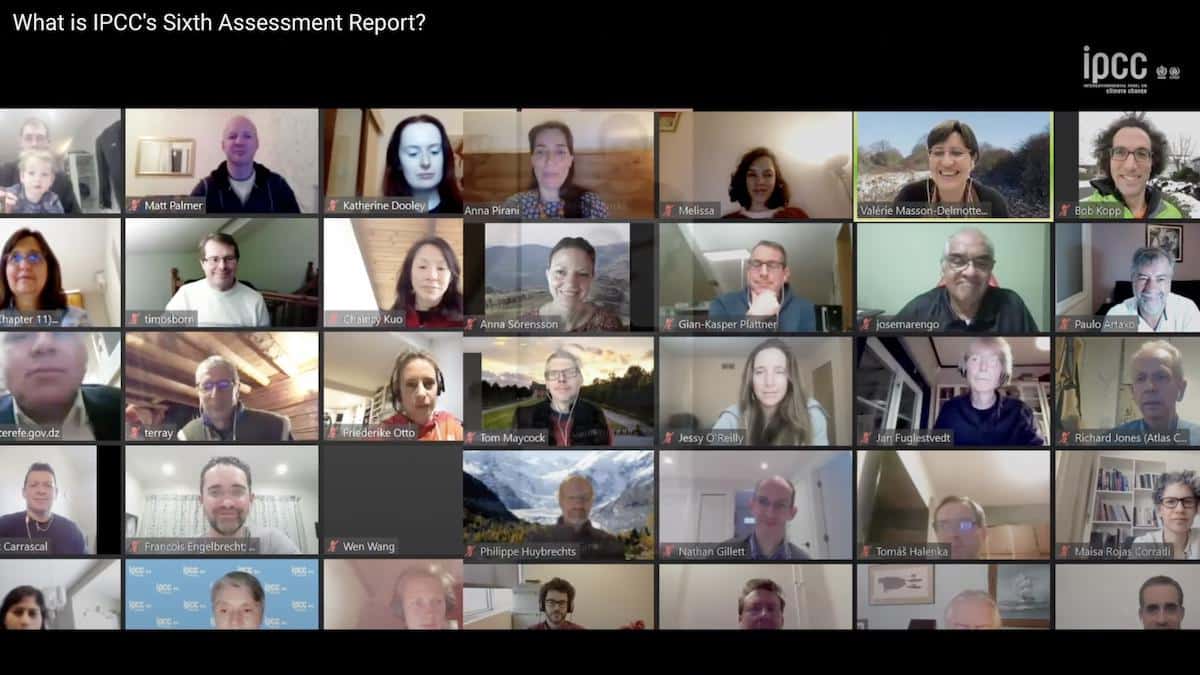 Amid an ongoing wave of extreme weather disasters and ahead of a major United Nations climate conference this fall, top scientists from nearly 200 countries began meeting Monday to finalize a landmark report detailing how the fossil fuel-driven climate emergency is already wreaking havoc around the globe and what society must do to avert its most catastrophic consequences.

The forthcoming report — the sixth edition of an assessment of the latest climate science from the UN’s Intergovernmental Panel on Climate Change (IPCC) — is “going to be very important worldwide,” Petteri Taalas, head of the UN’s World Meteorological Organization, told roughly 700 delegates via Zoom, Agence France-Presse reported.

NPR noted that the last edition of this IPCC report, which represents the international scientific consensus about anthropogenic climate change, “came out in 2013 — an eternity in the world of climate science, where the pace of both warming and research are steadily accelerating.”

As scientists convene for a two-week virtual meeting, deadly extreme weather events are continuing to take their toll throughout the world, making clear the urgent need to adequately confront the climate crisis.

From record-shattering heatwaves and droughts on multiple continents, to still-raging wildfires in North America and Siberia, to several devastating floods and landslides in Europe and Asia, a summer of non-stop climate-related disasters — along with projections that conditions will continue to deteriorate in the absence of fundamental political-economic transformation — has fueled demands for decisive action.

In addition to mounting evidence of the severity of planetary heating, another key development since the publication of the last IPCC assessment report was the 2015 adoption of the Paris agreement, which seeks to limit global temperature rise this century to “well below” 2°C, and preferably 1.5°C, compared to pre-industrial levels.

To date, AFP noted, the rapid increase in emissions of heat-trapping greenhouse gases over the past two centuries has caused the global average temperature to climb 1.1°C.

Two months ago, the International Energy Agency (IEA) warned that existing coal, oil, and gas operations must be shut down as quickly as possible for the world to have a chance of meeting the Paris agreement’s more ambitious goal, adding that there is “no need for investment in new fossil fuel supply.”

The IPCC, however, has been less successful in shaping actual global policy.

“The reality is that we are not on track to achieve the Paris Agreement goals of limiting climate change to 1.5 degrees by the end of the century,” Patricia Espinosa, executive secretary of the UN’s Framework Convention on Climate Change, said Monday in a statement. “In fact, we’re on the opposite track, heading for more than a 3°C rise.”

.@IPCC_CH is the UN body for assessing the science related to climate change.

Today, delegates begin discussions on a key report on the physical science basis of climate change.

The authors of the three-part IPCC report considered all climate research published before February 2021. Part one covers physical science and is set to be published on August 9, AFP reported. Part two, which covers impacts, is slated for a February release, while part three, which covers potential solutions, is expected to be unveiled in March.

Taalas told delegates on Monday that the document will be “critical for the success of the Glasgow climate conference in November.”

From Oct. 31 to Nov. 12, the United Kingdom will host the 26th UN Climate Change Conference of the Parties (COP26), during which heads of governments will meet for the first time since 2019 to discuss national pledges to slash greenhouse gas pollution.

Existing nationally determined contributions (NDCs), or emissions reduction targets, are inadequate to prevent catastrophic levels of warming in the 21st century, according to the UN. The IPCC hopes that governments will utilize the new report when creating plans for decarbonization, forest and fisheries management, and the protection of vulnerable populations from extreme weather.

“It takes years to put together the IPCC report,” NPR noted. “It has 12 chapters, covering everything from the heat-trapping properties of individual greenhouse gases to extreme weather events to the regional impacts of global warming.”

According to NPR, “The new report will be the most comprehensive, detailed, and accurate picture of the global climate ever released.” Because the computer models that scientists use to predict future changes — and the data that informs those models — have improved, scientists will be able “to say with more certainty how quickly the Earth is heating up, and how the extra heat being trapped by greenhouse gases will affect everything from sea levels and hurricanes to droughts and heat waves.”

For the first time, “the IPCC will break down its global climate science findings by region,” NPR reported. That’s significant because even though climate impacts are geographically uneven, “many countries don’t have the resources to systematically study how the climate is changing in their region, or what to expect in the future,” the news outlet added. “Without localized information, it’s impossible to prioritize infrastructure and housing that’s built for the climate of the future.”

In an effort to help policymakers understand the long-term effects of their present-day decisions and meet the scale of the climate crisis, the new report will present five future scenarios to delineate what the world might look like decades from now, depending on which policies are implemented by which countries in the coming months and years.

Earlier this year, the U.S. and the European Union pledged to cut carbon pollution in half by 2030, compared to 2005 levels, on their way to “net-zero” by 2050. Climate justice advocates pushing for a “fair share” approach to NDCs, however, have called such targets insufficient. Because impoverished nations have done the least to cause the crisis and yet are most vulnerable to its effects, progressives argue, rich countries with higher levels of historical emissions should contribute substantially more resources to climate change mitigation and adaptation.

Even if NDCs were deemed adequate, Fatih Birol, executive director of the IEA, said in April — before U.S. President Joe Biden’s infrastructure agenda had stalled in Congress — that wealthy governments have so far failed to develop specific plans for how to decrease emissions, let alone implement the policies necessary to do so.

For example, in one world countries work together to develop low-cost, low-carbon technologies and put them into use quickly for everyone. In another, some countries or groups of people transition very quickly to wind, solar, and other clean energy sources while others move much more slowly. In a third imaginary world, nationalism surges around the world and governments focus on local energy and food security rather than global economic changes to reduce greenhouse gas emissions…
Under most of the scenarios, it’s still possible to keep global warming below the 2 degree Celsius threshold set by the Paris agreement, says Zeke Hausfather, a climate scientist at the University of California, Berkeley. In other words, there are many ways to address climate change, and the new report will help describe those options.

A draft of the new IPCC report that was leaked last month, however, warned that the devastating effects of a warming world — including an increased risk of widespread hunger and disease — are set to hit far sooner than previously thought, prompting the authors to call for systems-wide changes to avert a worst-case climate scenario.

Tim Lenton, director of the University of Exeter’s Global Systems Institute, told AFP on Monday that “feedbacks which amplify change are stronger than we thought and we may be approaching some tipping points.”

In light of the existential threat posed by the climate emergency, UN Secretary-General António Guterres on Sunday reminded world leaders of the importance of ambitious climate action and international cooperation after officials at a Group of 20 summit failed to reach an agreement for a communiqué just 100 days away from COP26.

Last week, more than 160 organizations, led by the Stop the Money Pipeline coalition, launched the “Deadline Glasgow — Defund Climate Chaos” campaign to pressure Wall Street and the Biden administration to cut off funding for companies and projects fueling the climate emergency.

“The decisions nations make in the next few months,” Espinosa stressed on Monday, “will likely determine whether we will or will not ultimately limit global temperature rise at 1.5°C.”