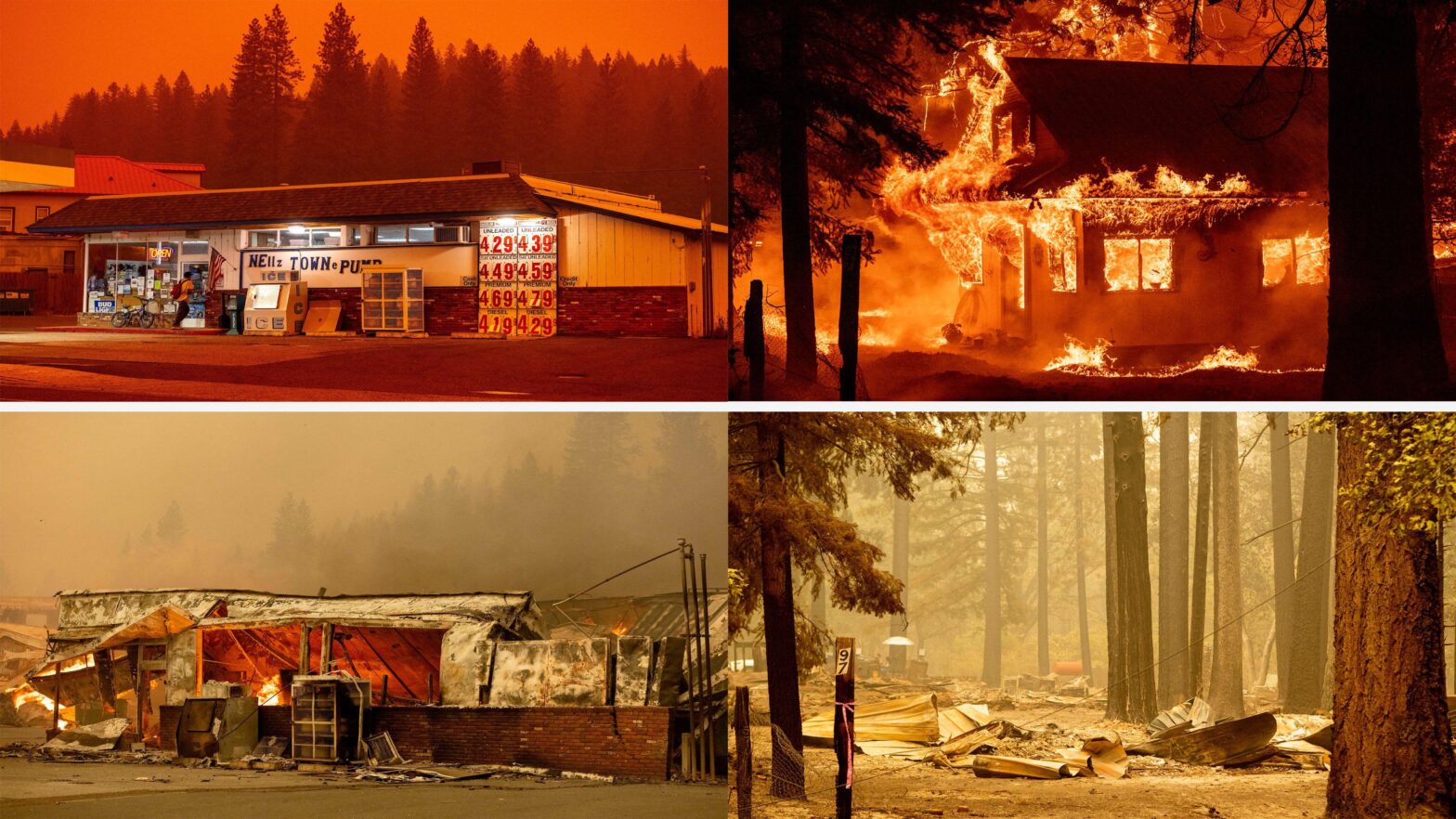 Dixie Fire before and after photos show (Above L) a gas station market before it burned on July 23, 2021 and (Bottom L) while it burned on Aug. 4, 2021 in Greenville, California, and (Above R) a home burning on July 24, 2021 and (Bottom R) the remains two days later on July 26, 2021 in the Indian Falls neighborhood of unincorporated Plumas County. JOSH EDELSON / AFP via Getty Images

The Dixie Fire ballooned in size over the weekend, polluting air quality to dangerous levels across the West.

The fire, the 6th-largest on record in California history just last Thursday is now the second-largest fire in California history and the state’s largest-ever single-source fire with nearly 500,000 acres burned as of Sunday evening. At least five people are currently missing though that number could grow as residents, some armed, refuse to evacuate.

Heat and drought, both of which are being made worse by human-caused climate change, have dried out the fire’s fuel sources, leading to “fire activity that even veteran firefighters haven’t seen in their career,” Edwin Zuniga, a spokesman for Cal Fire told The Washington Post. “We’re just in really uncharted territory.”

Smoke from fires in California and across the West has dangerously polluted air in multiple major cities, including Denver and Salt Lake City where air quality levels were among the worst in the world. That smoke, ironically, kept the fire from growing even faster over the weekend, but conditions are likely to clear and become more dangerous in the coming days.

The fire’s cause was under investigation. The Pacific Gas & Electric utility has said it may have been sparked when a tree fell on one of its power lines. A federal judge ordered PG&E on Friday to give details by Aug. 16 about the equipment and vegetation where the fire started.

Cooler temperatures and higher humidity slowed the spread of the fire, and temperatures topped 90 degrees Fahrenheit (32 degrees Celsius) instead of the triple-digit highs recorded earlier in the week.

But the blaze and its neighboring fires, within several hundred miles of each other, posed an ongoing threat.

Gov. Gavin Newsom surveyed the damage in Greenville Saturday, writing on Twitter that “our hearts ache for this town.”

“These are climate-induced wildfires and we have to acknowledge that we have the capacity in not just the state but in this country to solve this,” Newsom said on CNN.