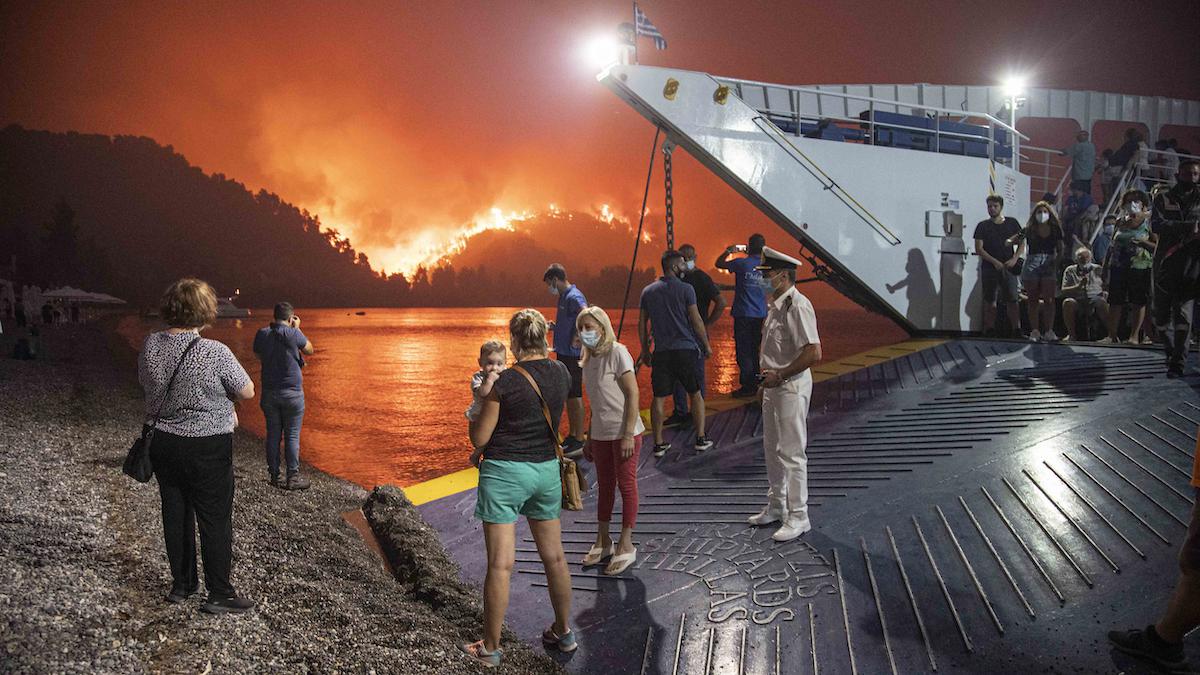 People on a ferry evacuating as a wildfire approaches the seaside village of Limni, on the island of Evia, Greece, on Aug. 6, 2021. STR / NurPhoto via Getty Images

The latest report from the Intergovernmental Panel on Climate Change (IPCC) is out, and it offers an urgent call to act immediately on the climate crisis.

The new report, released Monday, found that the climate is already changing in ways that are unprecedented in thousands to hundreds of thousands of years and that some effects, such as a certain amount of sea level rise, are already irreversible. It also warned that temperatures will likely spike beyond 1.5 to two degrees Celsius above pre-industrial levels this century unless greenhouse gas emissions are widely and rapidly reduced.

“The alarm bells are deafening, and the evidence is irrefutable: greenhouse gas emissions from fossil fuel burning and deforestation are choking our planet and putting billions of people at immediate risk,” Guterres said.

The report is officially titled IPCC Working Group I report, Climate Change 2021: the Physical Science Basis. It is the first part of the IPCC’s Sixth Assessment Report, which is due in full in 2022. This initial publication comes less than three months before the next UN Climate Change Conference in Glasgow, Scotland, as NBC News pointed out. The report will likely inform debate as world leaders are expected to arrive with ambitious pledges to reduce emissions by 2030.

The IPCC was first formed in the late 1980s and gathers thousands of scientists from 195 countries who review the latest scientific findings on climate change. Their reports are generally considered a scientific consensus on the issue. This latest report is the work of 230 authors and confirms that the climate crisis is largely human caused, is getting worse and will only be stopped with dramatic action.

The report concluded that the burning of fossil fuels was responsible for 1.1 degrees Celsius of warming since 1850-1900. Further, since 1970, global temperatures have risen faster than in any other 50-year period over the last 2,000 years, according to BBC News.

“It is a statement of fact, we cannot be any more certain; it is unequivocal and indisputable that humans are warming the planet,” report author professor Ed Hawkins, from the University of Reading, told BBC News.

This warming is already causing impacts such as more frequent and intense heat waves and more rainfall and flooding across the world, as evidenced by extreme weather events this summer such as heat-fueled wildfires in the U.S. West and deadly floods in Belgium and Germany.

“Climate change is already affecting every region on Earth, in multiple ways. The changes we experience will increase with additional warming,” IPCC Working Group I Co-Chair Panmao Zhai said in the press release.

All of this is set to accelerate in the future. The report authors found that the world would hit 1.5 degrees Celsius of warming by 2040 in all emissions scenarios run by the authors, and this could happen even earlier if emissions are not reduced, according to BBC News.

However, the report authors said that they thought the temperature rise could be paused and reversed if emissions are halved by 2030 and reach net-zero by 2050. They also said that it was still possible to limit warming to 1.5 degrees Celsius, but this is likely the last report that will be released while this is still the case.

“This report shows the closer we can keep to 1.5C, the more desirable the climate we will be living in, and it shows we can stay within 1.5C but only just – only if we cut emissions in the next decade,” director of research at the Grantham Institute, Imperial College London and IPCC lead author Joeri Rogelj told The Guardian. “If we don’t, by the time of the next IPCC report at the end of this decade, 1.5C will be out the window.”