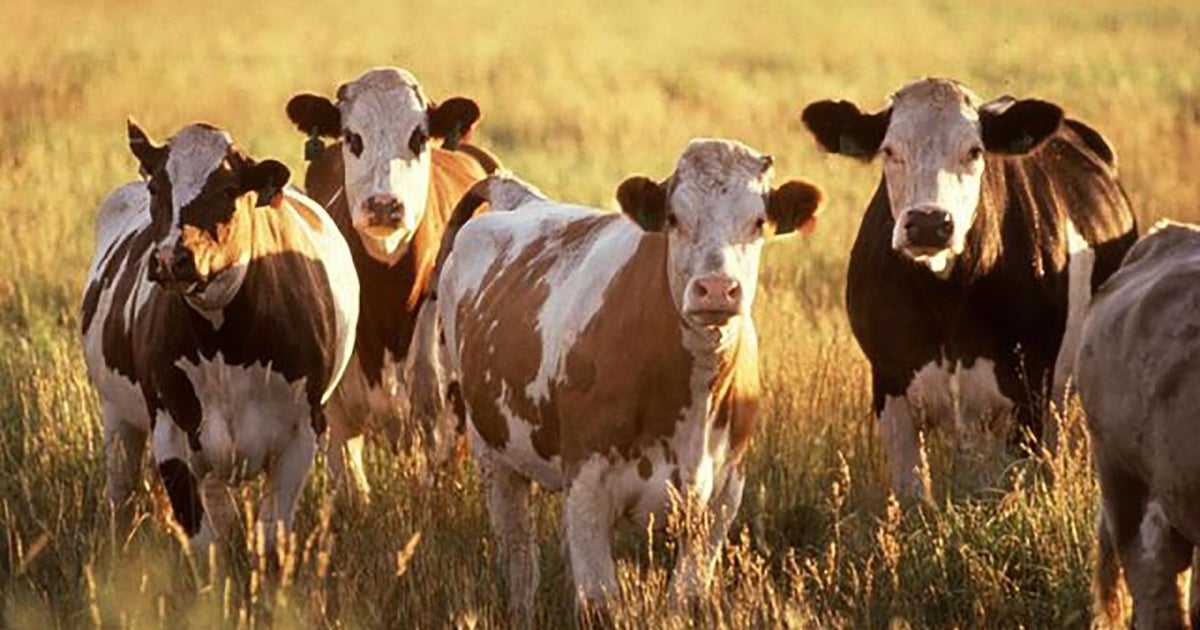 Beef and climate change are in the news these days, from cows’ alleged high-methane farts (fact check: they’re actually mostly high-methane burps) to comparisons with cars and airplanes (fact check: the world needs to reduce emissions from fossil fuels and agriculture to sufficiently rein in global warming). And as with so many things in the public sphere lately, it’s easy for the conversation to get polarized. Animal-based foods are nutritious and especially important to livelihoods and diets in developing countries, but they are also inefficient resource users. Beef production is becoming more efficient, but forests are still being cut down for new pasture. People say they want to eat more plants, but meat consumption is still rising.

All of the above statements are true even if they seem contradictory. That’s what makes the beef and sustainability discussion so complicated — and so contentious.

Here we look at the latest research (including from our recent World Resources Report) to address six common questions about beef and climate change:

1. How does beef production cause greenhouse gas emissions?

The short answer: Through the agricultural production process and through land-use change.

The longer explanation: Cows and other ruminant animals (like goats and sheep) emit methane, a potent greenhouse gas, as they digest grasses and plants. This process is called “enteric fermentation,” and it’s the origin of cows’ burps. Methane is also emitted from manure, and nitrous oxide, another powerful greenhouse gas, is emitted from ruminant wastes on pastures and chemical fertilizers used on crops produced for cattle feed.

A 2013 study by the U.N. Food and Agriculture Organization (FAO) estimated that total annual emissions from animal agriculture (production emissions plus land-use change) were about 14.5 percent of all human emissions, of which beef contributed 41 percent. That means emissions from beef production are roughly on par with those of India. Because FAO only modestly accounted for land-use-change emissions, this is a conservative estimate.

Beef-related emissions are also projected to grow. Building from an FAO projection, we estimated that global demand for beef and other ruminant meats could grow by 88 percent between 2010 and 2050, putting enormous pressure on forests, biodiversity and the climate. Even after accounting for continued improvements in beef production efficiency, pastureland could still expand by roughly 400 million hectares, an area of land larger than the size of India, to meet growing demand. The resulting deforestation could increase global emissions enough to put the global goal of limiting temperature rise to 1.5-2 degrees C (2.7-3.6 degrees F) out of reach.

2. Is beef more resource-intensive than other foods?

The longer explanation: Ruminant animals have lower growth and reproduction rates than pigs and poultry, so they require a higher amount of feed per unit of meat produced. Animal feed requires land to grow, which has a carbon cost associated with it, as we discuss below. All told, beef is more resource-intensive to produce than most other kinds of meat, and animal-based foods overall are more resource-intensive than plant-based foods. Beef requires 20 times more land and emits 20 times more GHG emissions per gram of edible protein than common plant proteins, such as beans. And while the majority of the world’s grasslands cannot grow crops or trees, such “native grasslands” are already heavily used for livestock production, meaning additional beef demand will likely increase pressure on forests. 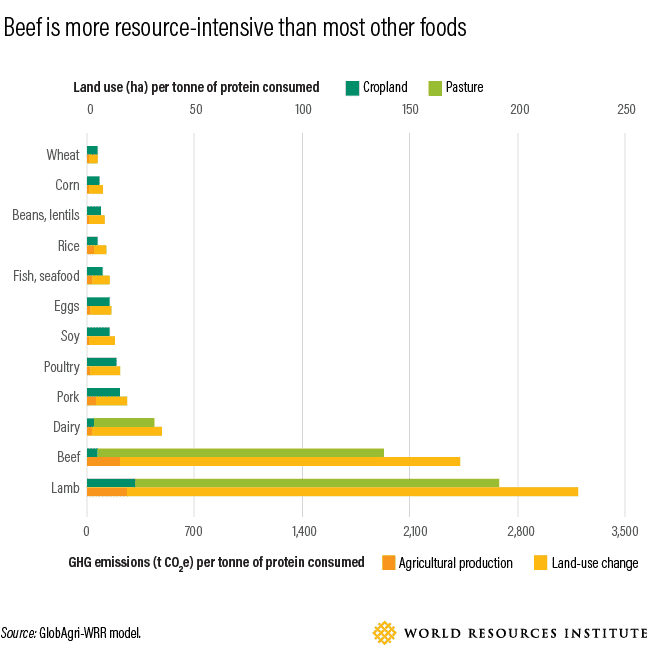 3. Why are some people saying beef production is only a small contributor to emissions?

The short answer: Such estimates commonly leave out land-use impacts, such as cutting down forests to establish new pastureland.

The longer explanation: There are a lot of statistics out there that account for emissions from beef production but not from associated land-use change. For example, here are three common U.S. estimates we hear:

While all of these estimates account for emissions from U.S. agricultural production, they leave out a crucial element: emissions associated with devoting land to agriculture. An acre of land devoted to food production is often an acre that could store far more carbon if allowed to grow forest or its native vegetation. And when considering the emissions associated with domestic beef production, you can’t just look within national borders, especially since global beef demand is on the rise. Because food is a global commodity, what is consumed in one country can drive land use impacts and emissions in another. An increase in U.S. beef consumption, for example, can result in deforestation to make way for pastureland in Latin America. Conversely, a decrease in U.S. beef consumption can avoid deforestation (and land-use-change emissions) abroad.

When these land-use effects of beef production are accounted for, we found that the GHG impacts associated with the average American-style diet actually come close to per capita U.S. energy-related emissions. A related analysis found that the average European’s diet-related emissions, when accounting for land-use impacts, are similar to the per capita emissions typically assigned to each European’s consumption of all goods and services, including energy.

4. Can beef be produced more sustainably?

The short answer: Yes, although beef will always be resource-intensive to produce.

The longer explanation: The emissions intensity of beef production varies widely across the world, and improvements in the efficiency of livestock production can greatly reduce land use and emissions per pound of meat. Improving feed quality and veterinary care, raising improved animal breeds that convert feed into meat and milk more efficiently, and using improved management practices like rotational grazing can boost productivity and soil health while reducing emissions. Boosting productivity, in turn, can take pressure off tropical forests by reducing the need for more pastureland.

Examples of such improved practices abound. For example, some beef production in Colombia integrates trees and grasses onto pasturelands, helping the land produce a higher quantity and quality of feed. This can enable farmers to quadruple the number of cows per acre while greatly reducing methane emissions per pound of meat, as the cows grow more quickly. A study of dairy farms in Kenya found that supplementing typical cattle diets with high-quality feeds like napier grass and high-protein Calliandra shrubs — which can lead to faster cattle growth and greater milk production — could reduce methane emissions per liter of milk by 8–60 percent. 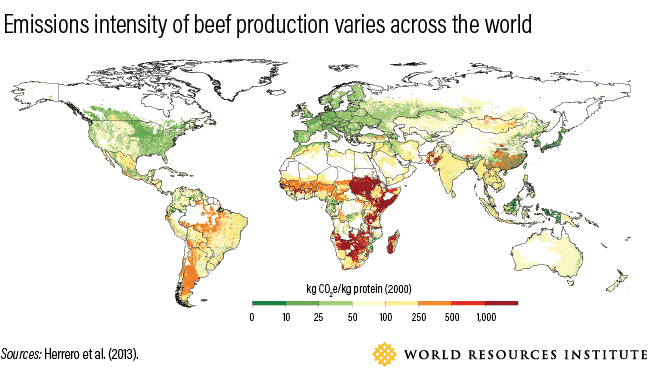 There are also emerging technologies that can further reduce cows’ burping, such as through feed additives like 3-nitrooxypropan (3-NOP). Improving manure management and using technologies that prevent nitrogen in animal waste from turning into nitrous oxide can also reduce agricultural emissions.

5. Do we all need to stop eating beef in order to curb climate change?

The short answer: No.

The longer explanation: Reining in climate change won’t require everyone to become vegetarian or vegan, or even to stop eating beef. If ruminant meat consumption in high-consuming countries declined to about 50 calories a day or 1.5 burgers per person per week — about half of current U.S. levels and 25 percent below current European levels, but still well above the national average for most countries — it would nearly eliminate the need for additional agricultural expansion (and associated deforestation), even in a world with 10 billion people.

Diets are already shifting away from beef in some places. Per capita beef consumption has already fallen by one-third in the United States since the 1970s. Plant-based burgers and blended meat-plant alternatives are increasingly competing with conventional meat products on important attributes like taste, price and convenience. The market for plant-based alternatives is growing at a high rate, albeit from a low baseline.

There are also other compelling reasons for people to shift toward plant-based foods. Some studies have shown that red meat consumption is associated with increased risk of heart disease, type 2 diabetes, stroke and colorectal cancer, and that diets higher in healthy plant-based foods (such as whole grains, fruits, vegetables, nuts and legumes) are associated with lower risks. In high-income regions like North America and Europe, people also consume more protein than they need to meet their dietary requirements. 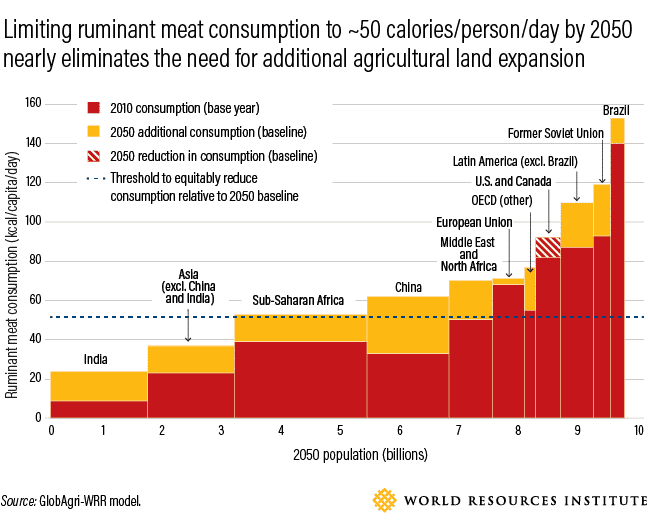 6. Would eating less beef be bad for jobs in the food and agriculture sector?

The short answer: Not necessarily.

The longer explanation: Given projected future growth in meat demand across the developing world, even if people in higher-income countries eat less beef, the global market for beef will likely continue to grow in the coming decades. The scenario in the chart above leads to a 32 percent growth in global ruminant meat consumption between 2010 and 2050, versus 88 percent growth under business-as-usual. In the U.S., despite declining per capita beef consumption, total beef production has held steady since the 1970s. Burgeoning demand in emerging markets like China will lead to more export opportunities in leading beef-producing countries, although building such markets takes time.

In addition, major meat companies — including Tyson Foods, Cargill, Maple Leaf Foods and Perdue — are starting to invest in the fast-growing alternative protein market. They’re positioning themselves more broadly as “protein companies,” even as they work to reduce emissions from beef production in their supply chains through improved production practices.

Moving Toward a Sustainable Food Future

Beef is more resource-intensive than most other foods and has a substantial impact on the climate. A sustainable food future will require a range of strategies from farm to plate. Food producers and consumers alike have a role to play in reducing beef’s emissions as the global population continues to grow. And as we all work on strategies to curb climate change — whether in the agriculture sector, the energy sector or beyond — it’s important we rely on the best available information to make decisions.