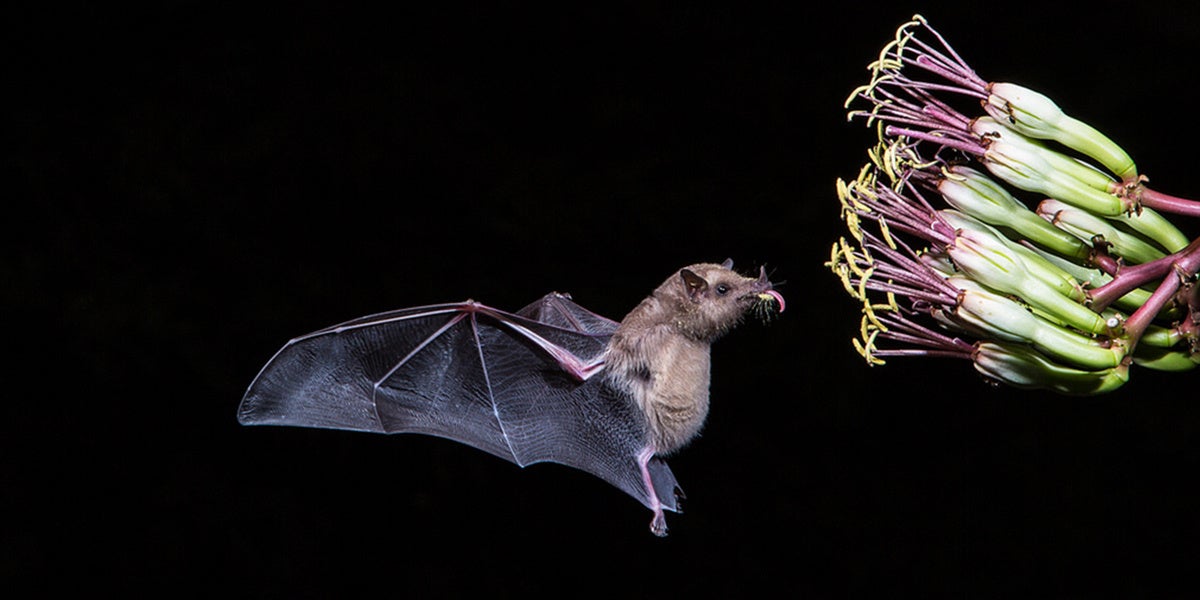 The lesser long-nosed bat made bat history Tuesday when it became the first U.S. bat species to be removed from the endangered species list because of recovery, the U.S. Fish and Wildlife Service (FWS) announced.

The bat, which is one of only three nectar-feeding bat species in the U.S., migrates between Mexico and the southwestern U.S. and feeds in part from the nectar of the agave plant used to make tequila. In 1988, when the species was first listed, there were only 1,000 of the bats left at 14 roosts. But due to a team effort between U.S. and Mexican scientists and government officials, as well as tribal leaders, non-governmental organizations, citizen scientists and tequila producers, the population has now rebounded to a healthy size of 200,000 at 75 roosts between the two countries. Mexico took the bat off of its endangered species list in 2015.

In a U.S. climate of diminishing environmental protections and increased border tensions, the recovery of the bat is a welcome reminder of what nations and communities can accomplish when they work together to protect the earth and its non-human species.

“The Service is proud of our strong, decades-long partnerships with very diverse stakeholders on behalf of the lesser long-nosed bat. Without partnerships and collaborations such as these, successful recovery would not be possible,” FWS Southwest regional director Amy Lueders said.

Because of its habitat and food source, the bat faced a unique set of challenges, National Geographic explained. The species spends the winters in southern and central Mexico, then travels north to northern Mexico and Arizona in the spring, sleeping in a series of caves and abandoned mines along a “nectar trail.”

But drug and human traffickers also used the caves. Their activities disturbed the bats’ habitats, and sometimes the traffickers would kill the bats intentionally. In the push to protect the bats, groups would build “bat gates” preventing humans from entering these caves. The bats were also collateral damage in Mexico’s attempts to control vampire bat populations, which spread rabies.

Further, while bats can help produce tequila, since they are a main pollinator of agave, tequila production can actually be harmful to bats. That is because, to make tequila, growers need to harvest agave plants before they flower, depriving bats of their food.

In the past, tequila growers had largely cloned blue agave plants instead of relying on pollination, but the cloning has weakened the plants to the point where 40 percent were diseased or dying in 2015, National Geographic’s The Plate reported.

Scientist Rodrigo Medellin launched a program to certify tequila producers as “bat friendly” if they let a section of their agaves flower naturally as bat food, in an attempt to protect the bats and strengthen the plant’s gene pool.

But the diets of lesser long-nosed bats are not entirely dependent on agave. They also drink the nectar of saguaro and organ pipe cacti, which U.S. and Mexican government agencies also worked to protect.

Other bats are not so lucky. Bat Conservation International chief scientist Winifred Frick told National Geographic that the Mexican long-nosed bat, which relies more heavily on agave, is still endangered.

“We can fully celebrate [the delisting] as a conservation win,” Frick told National Geographic. “But we also need to be paying attention to species that aren’t in as good a position.”

Still, the lesser long-nosed bat’s recovery offers a model of what is possible.