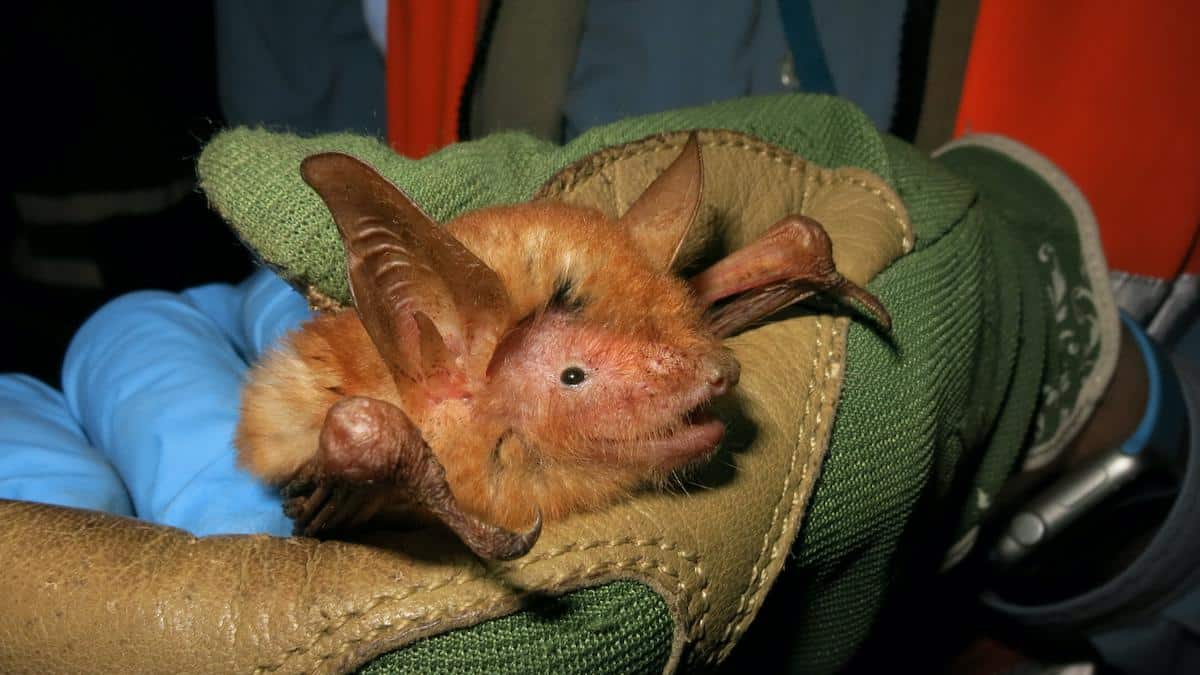 A new species of bat has been identified in West Africa. MYOTIS NIMBAENSIS / BAT CONSERVATION INTERNATIONAL

In 2018, a team of researchers went to West Africa’s Nimba Mountains in search of one critically endangered species of bat. Along the way, they ended up discovering another.

The new bat species, Myotis nimbaensis, has an unusual orange and black coloring, and it was written up for the first time last Wednesday in American Museum Novitates.

“In an age of extinction, a discovery like this offers a glimmer of hope,” study coauthor and chief scientist at Bat Conservation International Winifred Frick told the American Museum of Natural History. “It’s a spectacular animal.”

🚨 New research alert! A new species of a striking orange & black bat from the Nimba Mountains in West Africa has been described by scientists from the Museum & @BatConIntl.

Frick was part of a team of scientists from Bat Conservation International and the University of Maroua in Cameroon who were investigating natural caves and mining shafts in Guinea’s Nimba Mountains. The mountains, which rise about one mile above sea level, are known as sky islands and are important biodiversity hotspots for species including bats.

One especially important bat species is the Lamotte’s roundleaf bat, or Hipposideros lamottei, which lives only in the Nimba Mountains, and especially in abandoned mineshafts known as adits. But while trapping for the existing species, the scientists found something they did not expect.

“I looked in a net and there was just something interesting in there,” Jon Flanders, director of endangered species intervention at Bat Conservation International, told The Washington Post.

Flanders said he first saw the bat with his colleague Eric Moïse Bakwo Fils from the University of Maroua.

“Eric and I got back to camp and we independently started trying to figure out what the hell was going on. Finding a new species of specially colored bats is very rare. I was like, ‘I’m pretty sure this is a new species’. We walked in the room in the morning and simultaneously said ‘I think we’ve got a new species.’ “

So the pair called up bat expert and American Museum of Natural History Curator Nancy Simmons for help.

“As soon as I looked at it, I agreed that it was something new,” Simmons, who is also the paper’s lead author, said in the museum press release.

Simmons confirmed her initial opinion with help from the Smithsonian and the British Museum of Natural History, she told The Washington Post.

There are more than 1,400 species of bats, and more than 20 new ones are added to the list every year, according to The New York Times. But mostly, these discoveries are made in the lab by closely analyzing the DNA of similar-looking species previously thought to be the same.

“This sort of situation where experienced researchers went out in the field and caught an animal and held it in their hand and went, ‘This is something we can’t identify,’ that’s much more unusual,” Simmons told The New York Times.

The new bat is likely already endangered, since it is only known to live in the Nimba Mountains. Researchers said the next step is to learn more about the species so that they can protect it more effectively.

Bakwo Fils also told The New York Times that he hoped the discovery would boost bat conservation in West Africa more generally. Bats are important pollinators, seed spreaders and pest eaters in the region, but superstition and their connection with Ebola has meant they are often harmed.

“This discovery is very important in terms of West Africa’s bat biodiversity, because even if bats are a very important component of our ecosystems, they rarely receive attention,” Bakwo Fils said.