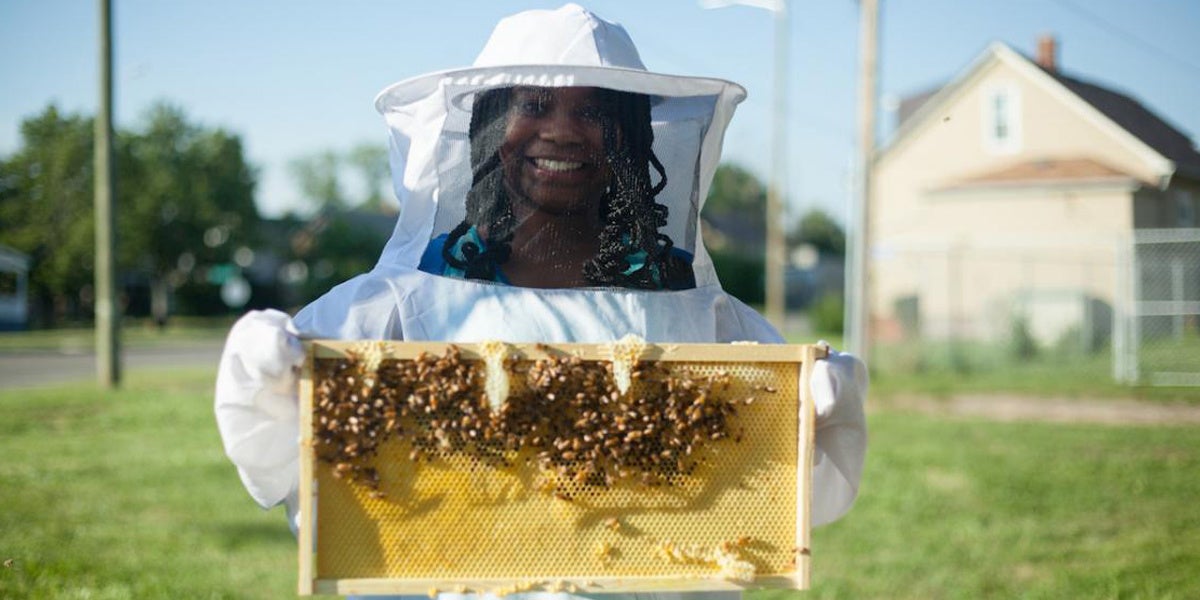 The buzz about Detroit has been its resurgent development. Historic buildings are being renovated into bars and hotels as new stadiums rise along Woodward Avenue, the city’s central corridor. But there’s a literal buzz as well: Detroit is home to a healthy population of bees, both wild and domestic.

A team of University of Michigan researchers led by Paul Glaum, a doctoral candidate at U.M.’s Department of Ecology and Evolutionary Biology, studied 30 urban farms and gardens in Ann Arbor, Dearborn, Detroit, Dexter and Ypsilanti. Only Detroit showed an increase in wild bee numbers, with a population that was stable and thriving. 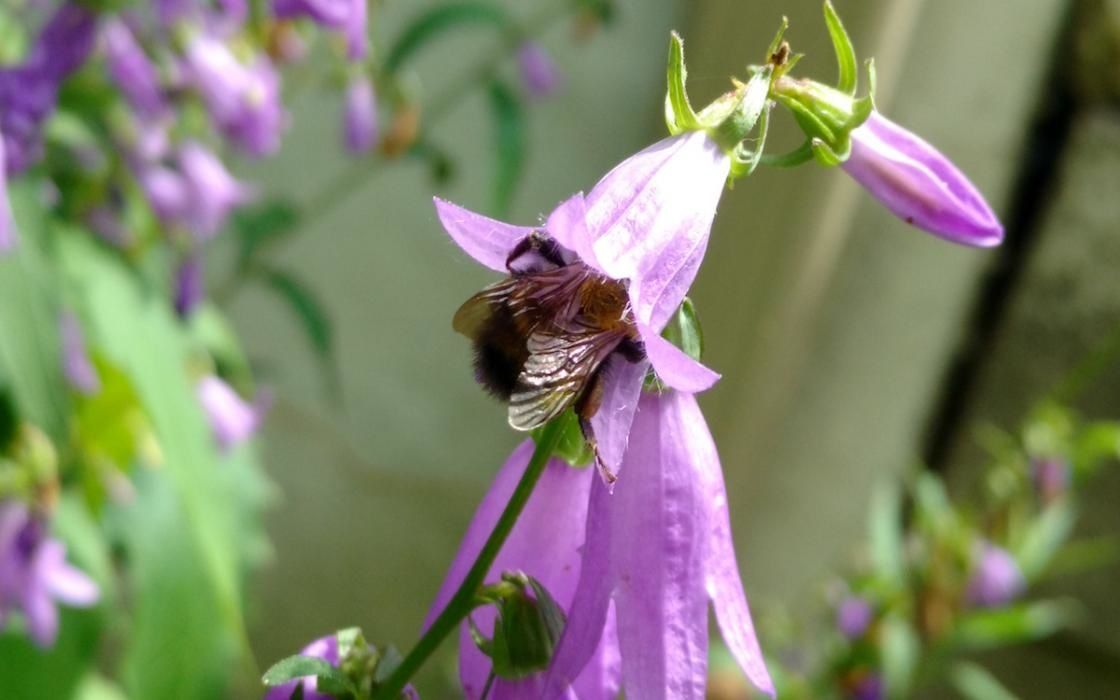 The group published its findings in Royal Society Open Science. “The decline in wild pollinators—bees in particular—is a widespread phenomenon with serious consequences for agricultural production and the general maintenance of biodiversity,” Glaum said. “With our study, we hoped to clarify some of the effects of urbanization on the wild bee community here in southeastern Michigan and see how those effects might change across different cities.”

The discovery of healthy wild bee populations (primarily the common eastern bumblebee, Bombus impatiens, followed by the brown-belted bumblebee, B. griseocollis, and the two-spotted bumblebee, B. bimaculatus) in Detroit was a surprise to the researchers. The reason is connected to the city’s decline in population from nearly 2 million to approximately 700,000 today, which resulted in thousands of abandoned lots that have been fallow for decades. Such sites are less likely to be mown or treated with chemical pesticides, creating an ideal situation for wild bees, even despite impervious paving covering large areas (one mark of urbanization the researchers used in comparing locations). One downtown urban garden in a paved setting had bumble bee measurements similar to that of a suburban nature preserve. 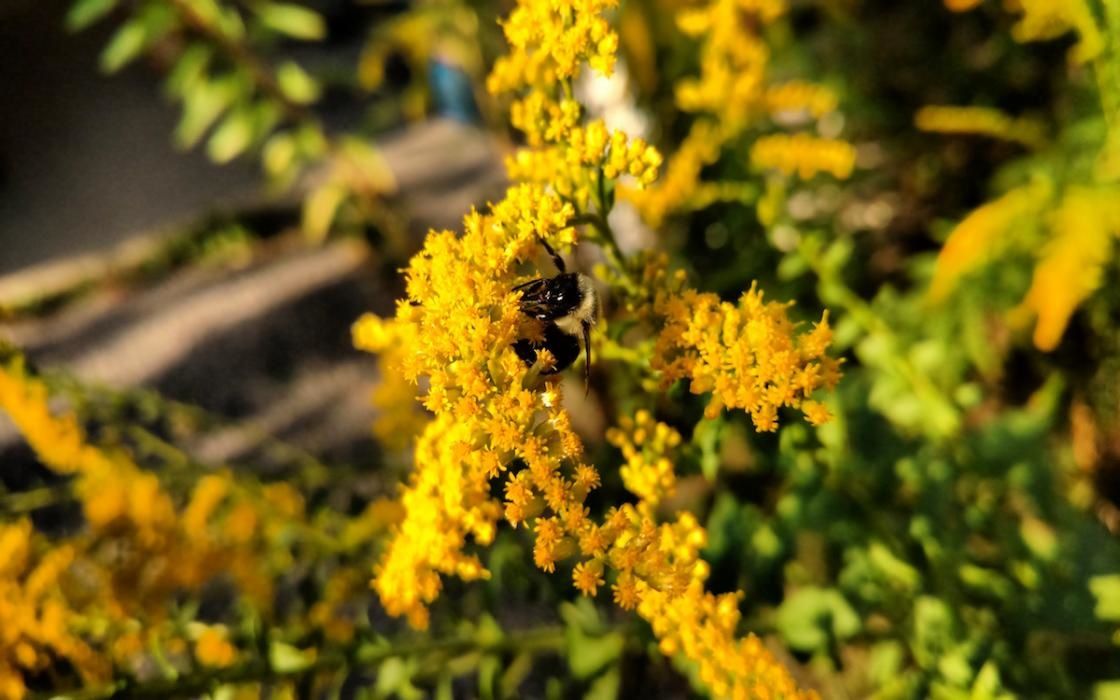 Not all bees in Detroit’s open spaces are wild. Another aspect to Detroit’s recent comeback is urban beekeeping, with both professionals and hobbyists maintaining colonies on urban farms in formerly abandoned lots. Though not all have beehives, among the new farms dotting the 140+ square mile city are the Michigan Urban Farming Initiative; the massive woodland Hantz Farm; D-Town Farm, an African-American back-to-the-land project; Recovery Park Farms, working with former prisoners; and Earthworks Urban Farms, run by Capuchin monks growing food for their soup kitchen.

One of the newest Motor City beekeeping initiatives is Detroit Hives, a nonprofit founded in 2017 by Timothy Paule and Nicole Lindsey. The two African-American beekeepers acquire abandoned lots, working with the Detroit Land Bank Authority and other groups. According to Paule, the project began when his curiosity was sparked after he treated a bad cold by eating raw local honey. Soon he and Lindsey were taking beekeeping classes. “We wanted to bring bees to their community, to not only revitalize vacant lots and protect the conservation of honeybees but educate the inner city about bees,” he said.

Paule acknowledges that African-American beekeepers are rare even in Detroit, a city where more than 80 percent of the population is Black. “There’s a need for urban beekeeping to help pollinate our local produce,” he said. “Together, gardeners and beekeepers create a perfect harmony to establish a great environment for pollinators.” (Detroit Hives is also creating ten acres of wild flower fields.) Although many of the thousands of abandoned lots remain in the city are now being developed, Paule said, many companies are choosing to be “environmentally responsible by adding pollinator gardens and community green spaces.”

For Detroit’s official Story Teller Aaron Foley, bees present both a new narrative and an employment opportunity. “One thing that’s unheralded about Detroit is the potential for more environmentally-friendly activity because of the amount of land we have,” he said. Beekeeping can be a way of “not only facilitating better use for vacant land, but developing new ways for the city as a whole to be more sustainable. That includes opening access for beekeepers in the city, which is just one more industry that Detroit can capitalize on as we look for more employment solutions beyond the automotive sector.”

Glaum adds a note of caution about Detroit’s beekeeping scene. Most bees kept by urban farmers, he said are European honey bees, Apis mellifera, which can compete with wild bees for resources. “While the degree to which this competition is affecting wild bees isn’t a constant, more honey bee hives does mean more potential for competition with native wild bees,” he said. On the other hand, he adds, people interested in beekeeping tend to value creating an environment conducive to wild bees as well.

“Detroit has an opportunity to break into interesting new ground in terms of city planning and how we manage the intersection between urbanity and the surrounding environment,” said Glaum. “Hopefully on-going development takes advantage of this opportunity to the benefit of all Detroiters.”