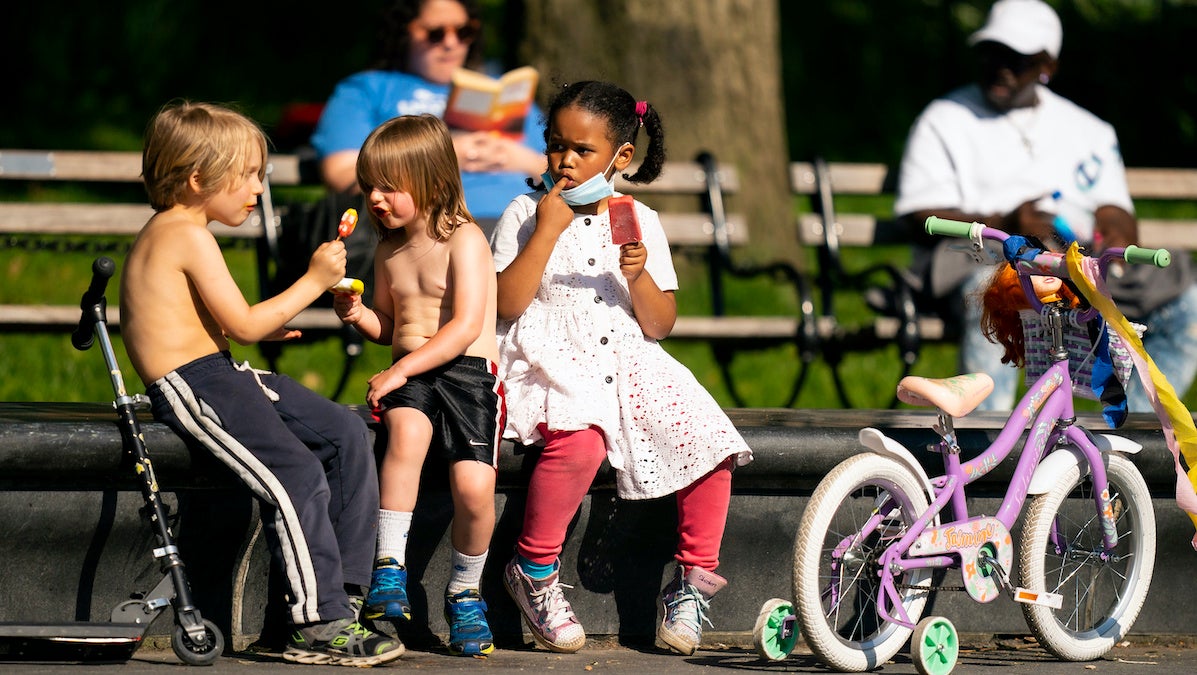 A group of children eat ice cream in Washington Square Park during the coronavirus pandemic on May 25, 2020 in New York City. Gotham / Getty Images

As the debate about reopening schools continues in the U.S., a new study has found that children under five might have 10 to 100 times more coronavirus in their upper respiratory tracts than adults.

The study, published in JAMA Pediatrics Thursday, does not prove that children are passing on the virus, but does suggest that they could be “important drivers” of community spread. And this raises concerns about what will happen when and if children return to school, the researchers said.

“The school situation is so complicated — there are many nuances beyond just the scientific one,” study leader and Ann and Robert H. Lurie Children’s Hospital of Chicago pediatric infectious diseases expert Dr. Taylor Heald-Sargent told The New York Times. “But one takeaway from this is that we can’t assume that just because kids aren’t getting sick, or very sick, that they don’t have the virus.”

The assumption that young children are not a driving force behind disease outbreaks is one of the arguments for reopening schools in the fall.

In recommending in-person schooling, the Centers for Disease Control and Prevention (CDC) said that current data suggests low rates of transmission between school age children or from students to teachers. The study authors acknowledged this, but also said the evidence was limited.

“Early reports did not find strong evidence of children as major contributors to SARS-CoV-2 spread, but school closures early in pandemic responses thwarted larger-scale investigations of schools as a source of community transmission,” they wrote. “As public health systems look to reopen schools and day cares, understanding transmission potential in children will be important to guide public health measures.”

The research was inspired when Dr. Heald-Sargent noticed that children’s coronavirus tests were showing up positive after fewer cycles, The New York Times explained. Each cycle picks up more virus, so a low “cycle threshold,” or C.T., means more virus in the sample.

“It wasn’t even something we had set out to look for,” she told The New York Times.

So the researchers looked at 145 nasal tests from patients in the Chicago area with mild to moderate symptoms who were tested within one week of falling ill, AFP explained. The tests, conducted between March 23 and April 27, came from three different age brackets. Forty-six were from children under 5, 51 from children aged five to 17 and 48 from adults aged 18 to 65.

Older children and adults had similar median C.T.s, but the median C.T. for younger children was significantly lower, the study found.

“The observed differences in median CT values between young children and adults approximate a 10-fold to 100-fold greater amount of SARS-CoV-2 in the upper respiratory tract of young children,” the scientists concluded.

One limitation of the study is that the tests pick up the virus’s RNA, not live virus itself. The study authors said that higher levels of virus nucleic acid in children have been shown to correlate with the ability to grow live virus from samples in the lab. However, other scientists said that the study would be more conclusive if the researchers had tested for live virus.

“I suspect that it probably will translate into meaning that there is more actual virus there as well, but we can’t say that without seeing the data,” Juliet Morrison, a virologist at the University of California, Riverside who was not involved with the study, told The New York Times.

The study’s results are backed up by other research. German scientists found that asymptomatic children still had viral loads as high or higher than adults, and a French study found children without symptoms had similar C.T. values to children who were visibly sick.

However, it is possible that young children’s higher viral load does not translate to higher transmission. A South Korean study found that children aged 10 to 19 spread coronavirus in the home at levels equal to adults, but children under nine did not, according to AFP.

Still, some external public health experts think the results of the JAMA Pediatrics study should be included in the discussion of reopening schools.

“Now that we’re rolling into the end of July and looking at trying to open up schools the next month, this really needs to be considered,” University of Manitoba virologist Jason Kindrachuk,, who was not involved with the research, told The New York times.