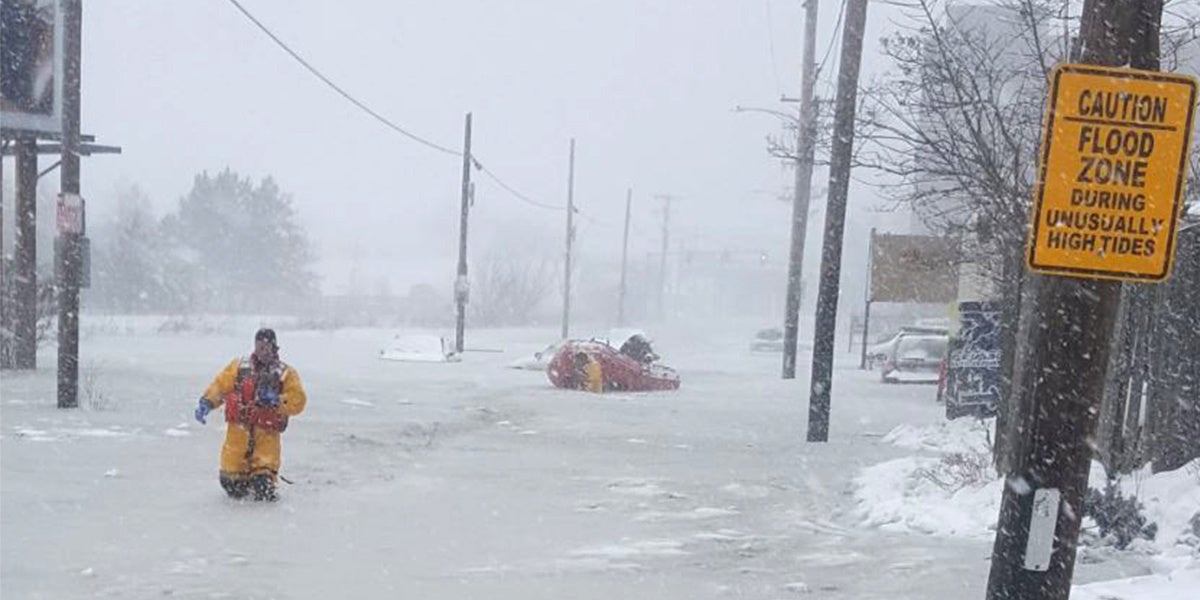 On Thursday in Massachusetts we were asking ourselves questions that have rarely, if ever, needed asking.

What happens when half-frozen seawater suddenly floods onto roadways? Can something the consistency of a milkshake and 3 feet deep be plowed? There’s a large dumpster floating down the street … What depth of water is sufficient to do that? What happens if some of this water freezes in place before it retreats (as I write this, the temps have plummeted to 12 degrees F and dropping)? Will those cars now filled with seawater in the snow-emergency parking lot run again? What if the water freezes inside them over the weekend—can that punch out doors?

The stories are countless. In Salem, MA, my mother watched out her window as fire and rescue workers hauled someone to safety on a raft through at times waist-deep water.

My colleagues and I think about coastal flooding a lot, but the footage from Thursday had our brains buzzing with new unknowns and threats never considered.

I’ve been keeping an eye on social media, the news, and hearing from friends and family, and these three questions emerged for me as needing to be asked and answered.

1. Why was this flooding so much worse than forecast?

In the lead up to Thursday’s storm, dubbed “Grayson” by the Weather Channel, the coastal flooding forecasts shifted from minor to moderate, from moderate to major. Coastal residents monitoring this would have been concerned but not nearly enough. Even as the storm was getting underway, the flooding forecasts greatly understated what actually played out on the ground.

In the end, severe flooding struck multiple areas of the coast of Massachusetts from the North Shore to the Cape, with chest-high water in some locations, emergency boat rescues, and damage that we’re just beginning to take stock of. People were caught off guard, greatly increasing the risk to public safety and the damage to property. For example, below is a shot of the Gloucester High School parking lot where residents are instructed to park their cars in a snow emergency. Ouch.

Look closely! These are cars submerged in record coastal flooding in #Gloucester Massachusetts! People were asked to get their cars off the streets and park at the local high school. Then the football field turned into a lake! @fox5dc pic.twitter.com/e6d8mdoSwe

The reasons given by local meteorologists for the surprising severity are the astronomical high tide (Monday was a full moon) that coincided with the storm’s path, and strong onshore winds creating significant storm surge and damaging waves. The tide itself is no mystery and our ability to forecast storm surge is pretty good. The wind speeds and snowfall totals were mostly as forecast. So where was the gap between our forecasting methods and tools and this storm’s true coastal flood potential? And how do we close it?

3. Was this flooding made worse by climate change?

Boston’s Mayor Marty Walsh declared “If anyone wants to question global warming, just see where the flood zones are. Some of those zones did not flood 30 years ago.” And he did so while the storm was still lashing the city. The days of tiptoeing around this question are clearly over.

So, what can and can’t be said here on sound scientific footing? Like any storm, there were a lot of factors responsible for Thursday’s: wind speed and direction, and the resulting storm surge and wave height. And there are two ways that climate change plays a role in the impact of storms like this.

We don’t know the day after, however. Such research takes time. But I expect we’ll hear more about the detection of climate change fingerprints on this storm in the months to come. See my colleague Brenda Ekwurzel’s blog for more on this specific topic.

The other way climate change plays a role in the impact of storms is clear and can be discussed more definitively today: today’s storms have higher water levels to “work with” due to sea level rise. In Boston, water levels have risen ~5 inches just since the blizzard of ’78. (This upward trend is also responsible for the increased tidal flooding along Boston’s waterfront.) So ANY storm that hits our coasts today is working with water that is higher and closer to our cities, buildings, homes and infrastructure, than when we first put them there.

It was interesting to note that the tide height associated with this storm topped the Blizzard of ’78 by hundredths of an inch. In its defense, the Blizzard of 78 was working with an ocean that was 5 inches “shorter.” If that exact storm happened today, the flooding would be worse than it was in 1978 given this additional water. And importantly, the damages would likely be worse as well, given the additional people, property and stuff we’ve put along our coasts since that time.

But speaking of comparisons. We released an analysis in 2017 that identified areas along the entire U.S. coast that would flood on a chronic basis, just with normal tidal fluctuations. By 2060, the general area of Boston that flooded Thursday would flood at least 26 times per year, irrespective of storms or rainfall, with a high rate of sea level rise. (Add storms and rainfall and the frequency rises.) That’s about 45 years from now, well within the lifetime of the buildings and infrastructure we’ve built and continue to build in these areas. With a more moderate rate of sea level increase, it would flood chronically a couple of decades later. This sunny-day flooding—the kind seen today at places like Long Wharf during extreme high tides—wouldn’t have the destructive waves of Thursday’s storm. It would, however, put large areas under inches and potentially feet of sea water, it would be unaffected by the construction of major harbor storm barrier, and it would preclude business-as-usual along some of the busiest and highest-value parts of Boston’s waterfront. Go to this link to view your own coastal community.

Importantly, our analysis also shows that a lower rate of sea level rise, associated with adherence to the Paris agreement, could greatly reduce this flooding.

4. What are some responsible takeaways?

We’ll be taking stock of this storm for some time to come.

Boston, a city with a strong and growing commitment to coastal climate preparedness and resilience, an unsurpassed local expert community, and uniquely engaged business and philanthropic sectors, can emerge as an even stronger national leader in the wake of this storm.

Massachusetts, with its growing if patchy commitment to the same, can recognize its mounting exposure to coastal flooding and get much more serious on this front. Republican Governor Charlie Baker’s executive order on state government adaptation efforts shows that sensible, bipartisan action is possible. Passage of the bill to establish a comprehensive adaptation management action plan (CAMP) would codify this order and represent a serious commitment toward tackling our climate risks.

The important takeaway for Boston, Gloucester, Scituate, Barnstable, Salem and on down the line—as well as for places in other states that dodged this bullet, this time—is not simply how do we prepare for storms like this. It’s how do we prepare for a future—and to a certain extent, a present—where storms have the potential to be more destructive, and where no storm is needed for transformative flooding to occur. In Massachusetts, we can do that, and the sooner we start, the less costly and disruptive it will be.

Erika Spanger-Siegfried is a senior analyst in the climate and energy program at the Union of Concerned Scientists.