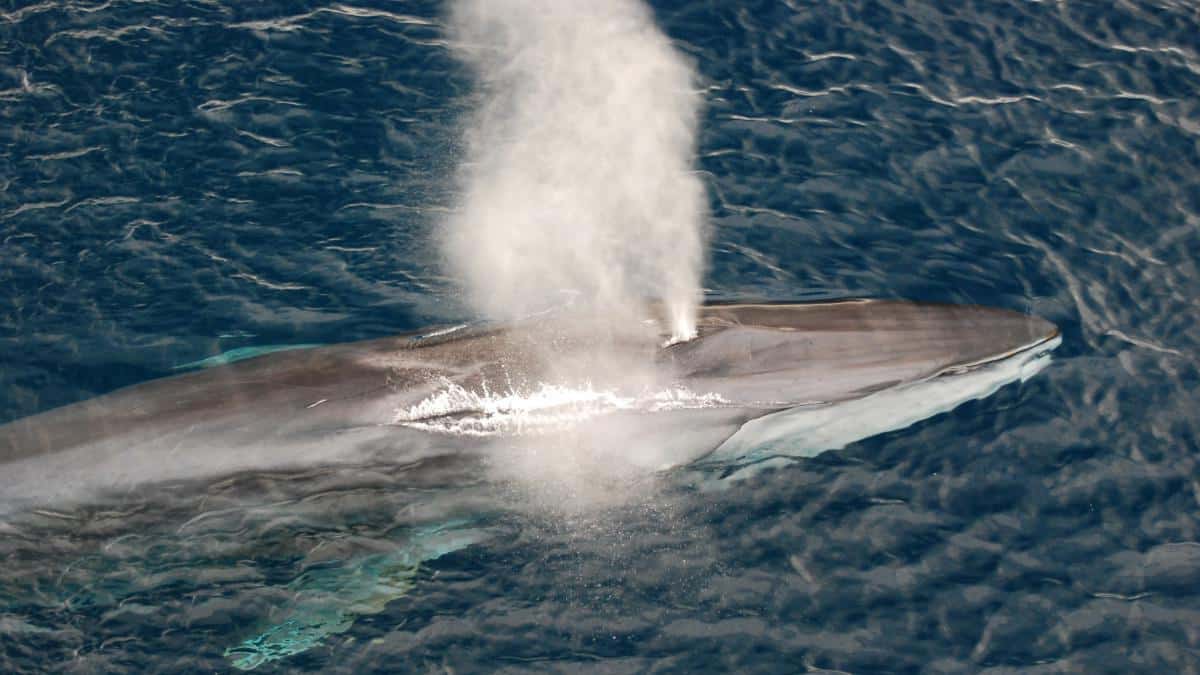 A new study finds that scientists can use fin whale song to help image the ocean floor. JG1153 / Getty Images

A study published in Science on Thursday found that it’s possible to use fin whale song for imaging the structure of the Earth’s crust beneath the ocean floor.

In order to create ocean floor images, scientists typically need to use air guns that shoot sound beneath the waves. The sound waves travel through the crust and bounce back to instruments on the seafloor, Scientific American explained. This provides important information about the workings of earthquakes and the ocean’s ability to store carbon, but the loud noise can interfere with marine mammal communications.

Now, it looks like scientists have found a new method thanks to marine mammals themselves.

“It shows these animal vocalizations are useful not just for understanding the animals, but also understanding their environment,” John Nabelek, study co-author and Oregon State University College of Earth, Ocean and Atmospheric Sciences professor, said in a university press release.

Fin whales can grow to be 60 tons and 80 feet long, according to The New York Times. Their songs are proportionate to their size, reaching up to 189 decibels. They can also be heard from 600 miles away, Scientific American reported.

“They’re nearly as loud as a big container ship,” William Wilcock, a marine geophysicist at the University of Washington and not part of the study, told The New York Times.

The study found that those sound blasts can help scientists create images of the Earth’s subsurface 1.6 miles below the seafloor, Scientific American reported.

Seismologist Václav Kuna, an Oregon State doctoral student at the time, made this accidental discovery, according to the press release. While listening to seismometer recordings, Kuna kept hearing one-second chirps that would repeat every 30 seconds, The New York Times reported.

He realized that the sounds were coming from fin whales, but something seemed unusual about them, Scientific American explained. At the time, seismometers, which measure vibrations, were recording the songs, instead of underwater microphones. That meant the whale song was echoing from below ground.

“After each whale call, if you look closely at the seismometer data, there is a response from the Earth,” Nabelek said in the press release.

The press release explained the process and its meaning for the scientists:

Whale calls bounce between the ocean surface and the ocean bottom. Part of the energy from the calls transmits through the ground as a seismic wave. The wave travels through the oceanic crust, where it is reflected and refracted by the ocean sediment, the basalt layer underneath it and the gabbroic lower crust below that.

When the waves are recorded at the seismometer, they can provide information that allows researchers to estimate and map the structure of the crust.

The researchers were able to use songs recorded by three different seismometers in order to pinpoint the whales’ location and make images based on their calls.

Imaging the area immediately below the seafloor can help scientists understand earthquakes and how they impact ocean sediment. The whale songs could also provide information about the location of earthquakes and the amount of carbon that can be stored in ocean sediments, Scientific American reported.

Because fin whales live everywhere except the ice-covered Arctic, their songs are a widely available tool, Wilcock told Scientific American.

Kuna told The New York Times that he did not think fin whale songs could replace air guns since they create relatively weak seismic waves and therefore low-resolution images. But air gun surveys are expensive and it can be hard to obtain permits to use them, so whale songs can fill in the gaps, the press release explained. And relying more on whale songs can reduce the underwater noise pollution that is harming marine life, according to a recent scientific review.