Could the ‘Loneliest Whale’ Teach Us About the Need to Connect? 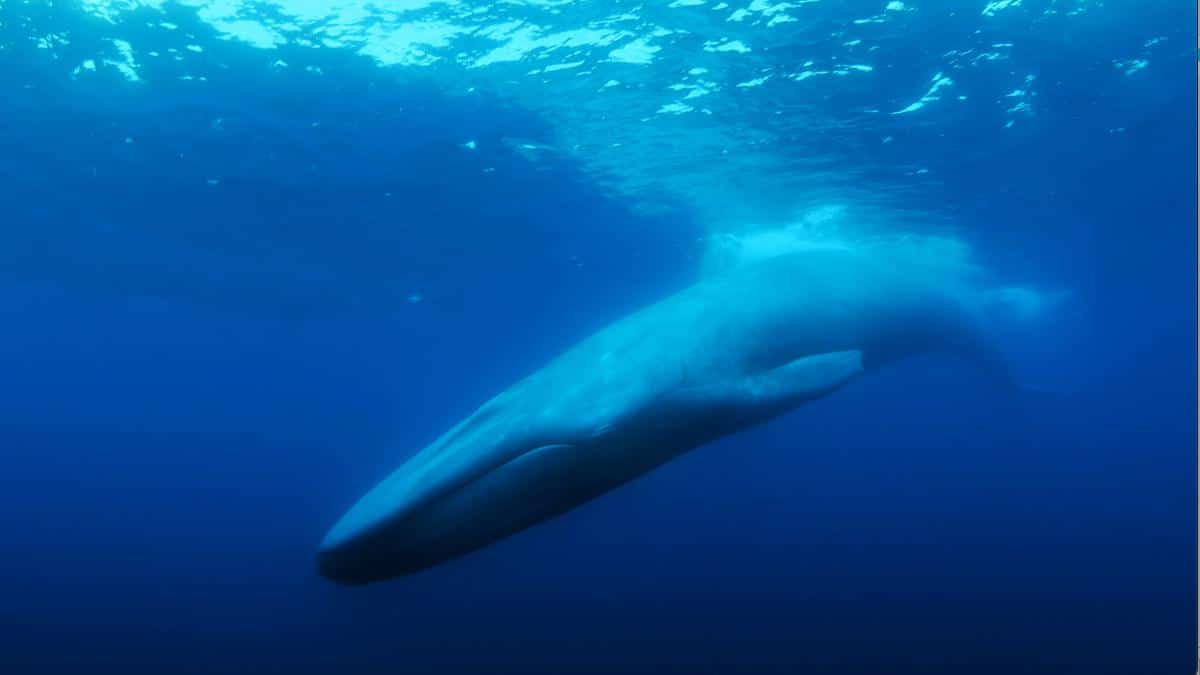 Scientists hypothesize that the "52 Hertz Whale" is a hybrid blue and fin whale. Bleecker Street

For decades, legendary oceanographer and marine mammal researcher Bill Watkins tracked a mysterious creature without ever finding it. Watkins realized it was probably a whale. Researchers nicknamed it “The World’s Loneliest Whale” because they hypothesized that it sang at a frequency that other whales could not hear or understand — one that rang out clearly at 52 hertz. They thought it might have spent its entire life in solitude, and they, and the rest of the world, found its existence captivating and almost haunting.

Watkins often insisted, “What we can hear is sometimes more powerful than what we can see.” In his new film, The Loneliest Whale, award-winning filmmaker Joshua Zeman takes up the mission to find the “52 Hertz Whale” and suggests that what we feel may perhaps eclipse both what can be seen and heard.

Put forth by executive producers Leonardo DiCaprio and Adrian Grenier, the film uses the sciences of tracking whales and their songs to explore the human experiences of connection and communication. This all happens through the artistic lens of this solitary whale and the expedition searching for it.

“It’s been said this whale has spent its entire life swimming through the oceans, calling out and never once receiving a response. No one has heard from this whale since the Navy stopped listening 10 years ago. No one’s ever seen this whale. No one knows if he’s the first of his kind or the last,” Zeman opens the film saying.

The story of this whale began in 1989. SOSUS, a collection of underwater hydrophones built by the U.S. Navy to detect enemy submarines, picked up some strange signals at a frequency of 52 Hertz, BBC reported.

Watkins was the first to suggest that the sounds were likely biological, a whale call unlike any he’d heard. It was similar to a blue whale song, with one major difference: pitch.

“52,” as the whale is also referred to, sings notes three times higher than those of other fin or blue whales, the species whose migratory patterns his most closely resemble. Key notes in 52’s song fall at a frequency of 52 hertz and sound, to human ears, like low bass notes, BBC reported. Blue and fin whales, on the other hand, sing between 10 to 40Hz and at 20Hz, respectively.

Some scientists have suggested that 52’s song is too high a frequency for other whales to hear or too different for them to understand, Deep English reported.

“Such an obscure song receives no response from other whales. Scientists are confused why a healthy creature doesn’t change its tune and communicate in a regular pattern used by other whales,” Deep English added.

The leading hypothesis, according to BBC, is that 52 is a hybrid fin and blue whale, with an unusual body shape that might affect its song. Zeman and the scientists in the film follow a pod of blue whales to an area where 52 has been heard more recently and find one “interesting” looking individual — with apparent characteristics of both species. Before they can tag the whale, a ship blares into the scene, and the entire pod scatters. 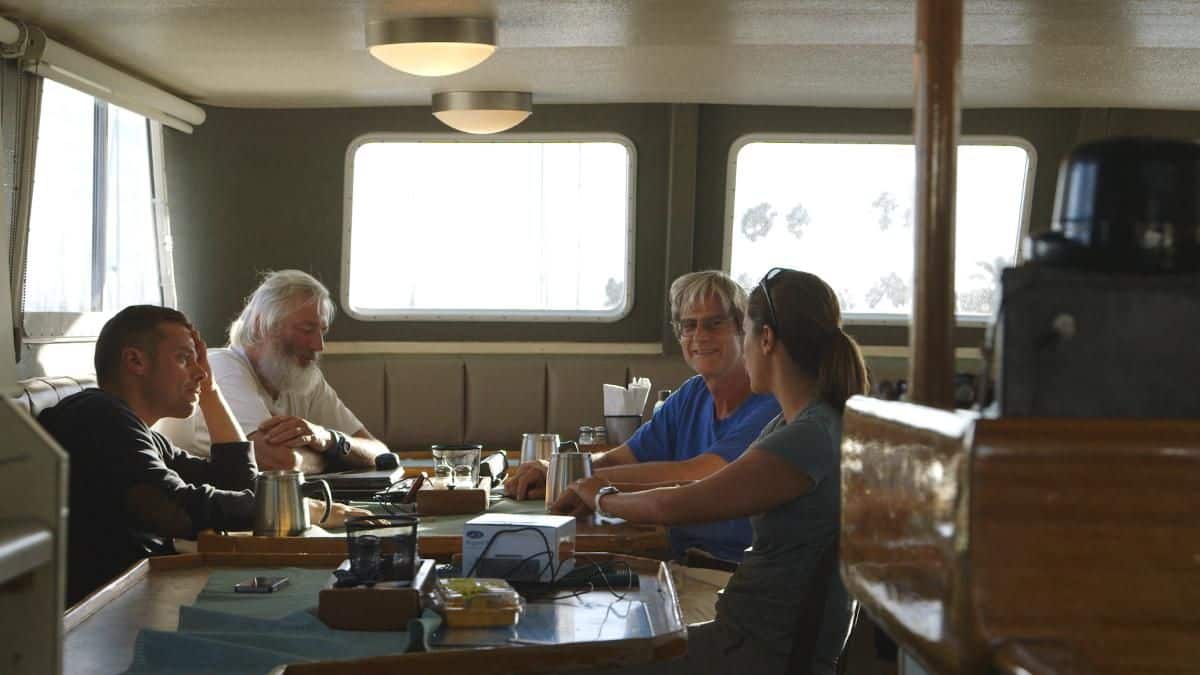 Filmmaker Joshua Zeman (front, left) sits with lead scientists on the expedition to find “The Loneliest Whale in the World.” Bleecker Street

Zeman uses this opportunity in the film to address the human impact on the oceans, both historical and contemporary. Commercial whaling extracted hundreds of millions of whales by the 1960s, and it wasn’t until scientists discovered that whales sing and communicate to each other that the public began insisting they be protected, the filmmaker said.

Indeed, the 1970 album “Songs of the Humpback Whale” by bio-acoustician Roger Payne galvanized the movement to save the whales as well as the Greenpeace movement and today’s Green Movement, Zeman told EcoWatch. Payne’s album remains the best-selling nature sounds album of all time and bolstered awareness of whales and other animals as sentient beings and efforts to ban commercial whaling.

Scientists recently identified a new species of blue whale through its unique vocalizations.

Now, shipping has entered the whales’ storyline as the new threat. Aside from fatal ship strikes, noise from barges and seismic tests drowns out the sounds of nature. The film estimated that the acoustic footprint of a ship going 30 knots is between 1,000 and 10,000 times greater than normal conditions, the equivalent of an “acoustic smog” smothering the noises of animals trying to communicate.

An unrelated study found that humpbacks, whose songs are perhaps the most famous, are falling silent due to shipping noise.

“We’re depriving these animals of their ability to maintain their social systems. They’re unable to communicate,” Zeman finds in the film. “We are creating a whole ocean of lonely whales.”

In the decades since 52 was first heard, the initial scientific questions about species and vocalizations have given way to more philosophical ones, which Zeman also tackles: is this whale actually sad? Are whales capable of feeling human emotions?

“That’s the question I wanted to ask: is it really lonely? Or are we prescribing our fears and emotions onto this creature? Can we understand our human experience and be empathetic to our human experience through the notion of an animal?” the filmmaker queried EcoWatch.

Zeman noted, as did a few scientists in the film, that we have a tendency as humans to anthropomorphize — to assign human qualities to other creatures because we want to understand them and relate to them in the context of our own experience. It’s about connecting, and, in that, it isn’t necessarily a bad thing, Zeman said.

“If we don’t have connections, we’re all just waiting for our next cheeseburger,” he joked.

In terms of relating to the natural world, each other and ourselves, sometimes animals actually help us “get there quicker,” Zeman said. Taking “homeless, or houseless people, rather” as an example, he said there’s a lot of societal and personal judgment in that naming convention. But when we talk about an animal, we cannot impose that human judgment on it because it’s a creature. So, the ways in which we describe animals might actually reflect what we are thinking about ourselves, he said.

According to Zeman, the search for the world’s loneliest whale and whether or not it truly is forlorn is perhaps more about our current human state than anything else.

“The idea of a creature being out there in the void, in the darkness, communicating across vast distances and never being heard, that just speaks to the human experience,” Zeman concludes. “We’re all trying to break through the noise, trying to be heard.”