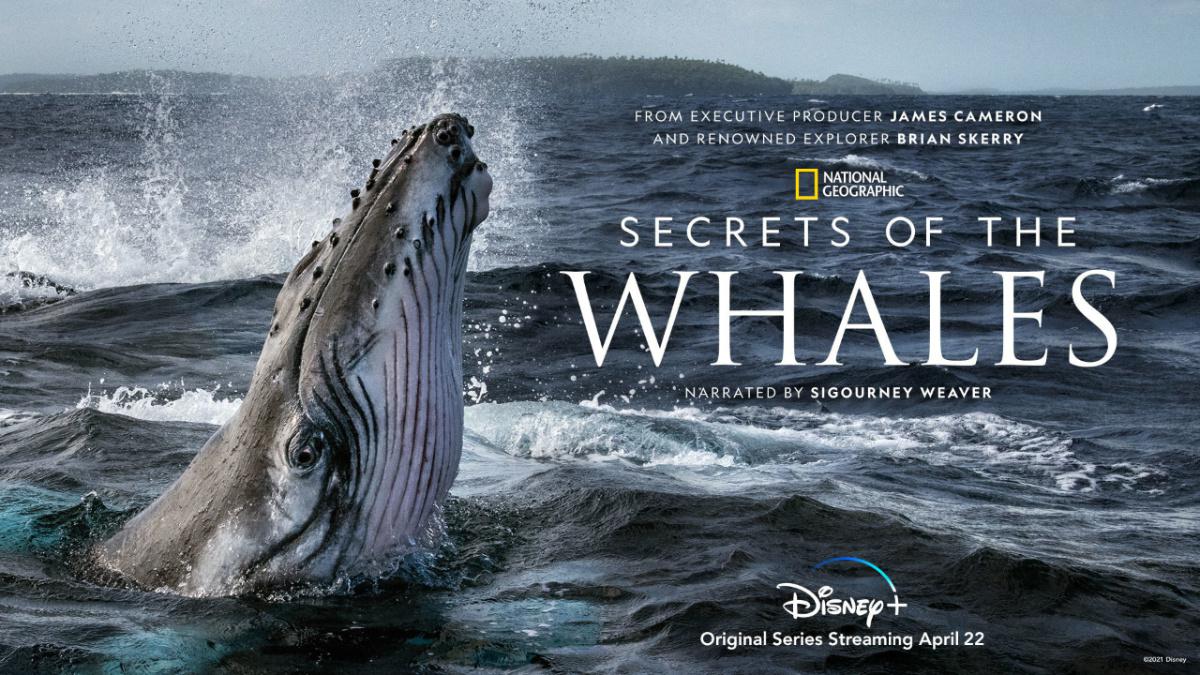 "Secrets of the Whales" is a new series that will start streaming on Disney+ on Earth Day. Disney+

In celebration of Earth Day, a star-studded cast is giving fans a rare glimpse into the secret lives of some of the planet’s most majestic animals: whales. In “Secrets of the Whales,” a four-part documentary series by renowned National Geographic Photographer and Explorer Brian Skerry and Executive Producer James Cameron, viewers plunge deep into the lives and worlds of five different whale species.

“The title refers to the latest and greatest science, which reveals that whales are a lot more like us than we first thought,” Skerry told EcoWatch. “Science is clinical and studied. Traditionally, [we were] afraid to anthropomorphize whales. But now, science shows us they’re very complex — with societies, families, emotions and cultures.”

Following orcas, humpbacks, belugas, narwhals and sperm whales, Skerry takes viewers on a journey into the underwater world to experience whales like never before — watching them make lifelong friendships, teach their young specific traditions and grieve the loss of family. This is whale culture, Skerry explained, and these social bonds are the secret to their success.

Skerry explained how Shane Gero, his friend and sperm whale researcher, helped him frame whale culture in human terms. “There’s a difference between behavior and culture,” Skerry quoted Gero. “Behavior is what we do; culture is how we do it. For example, we eat food. That is behavior. But whether we eat it with a fork or chopsticks, that is culture.”

Using this lens, Skerry shows how orcas around the world have developed distinct cultures around food. While New Zealand’s orcas hunt hidden stingrays in the shallows, Patagonia’s whales catch sea lions off the beach, and Norway’s whales slap herring schools with their tails to stun them. These unique customs are also passed down to each generation. In the first episode, viewers follow five orca matriarchs as they teach their young the family’s unique hunting legacy. The skills are not innate traits, but learned techniques adapted for survival in the local environment. Skerry explained how, without this ancient passage of knowledge, specific ways of life would die out.

“This is the whales teaching their young,” Skerry said. “This is generational, teaching the young how to survive, but also cultural — teaching them what matters to their family.”

The episode also shows how external forces, such as humans fishing for herring in Norway, have changed whale culture in the area. When Skerry first visited the Arctic years ago, local orcas would corral fish to hunt. Now, with the advent of commercial fishing boats, they’ve learned to approach the ships and eat the fish that escape.

“I think of this as takeout,” Skerry joked to EcoWatch. “If this behavior lasts a long time, maybe it will become culture. Maybe it already is.”

For many, the series may be the first time seeing how different populations of whales have developed different customs based on where they are from, just like humans. Skerry explained, “Whales have dialects and they isolate. Sperm whales won’t intermix with genetically identical animals that don’t speak the same dialect. I think of this like the neighborhoods of New York, separated in enclaves by language. That’s what the whales are doing.”

Filmed during three years in 24 locations and narrated by Conservationist and Actress Sigourney Weaver, the National Geographic series showcases many never-before-recorded moments, such as belugas giving themselves names and humpbacks communicating through breaching. Throughout, the underlying messages are the same: whales have cultures that differ based on where they are from; they live in complex societies framed by tradition, survival and emotions; and, they’re just like us.

In conjunction, Skerry has released a photography book with the same name that shares more secrets from the world’s largest mammals. Plus, National Geographic’s May magazine, dubbed “The Ocean Issue,” aligns with the four-part series and Skerry’s book, and will feature four related stories. The issue will publish April 15 and be available at natgeo.com/planetpossible.

Skerry believes the grand presentation of this new whale world will move people. He hopes viewers and readers will come to understand the complexity and connectivity between humans and the other “societies of beings” that we share the planet with. “We are visual creatures. We respond emotionally, viscerally to powerful imagery — it touches a part of our soul. Great science and storytelling that incorporates art checks all the boxes to move that needle,” Skerry said.

He added, “On Earth Day, this is a good way to celebrate… this is a new view of the world. This changes our perception: no longer are we apart from nature or above it — we are intimately connected to it.”

All four episodes of “Secrets of the Whales” will start streaming on Disney+ on Earth Day, Thursday, April 22nd.

A Southern Right whales is pictured in the accompanying book, “Secrets of the Whales.” Brian Skerry / National Geographic