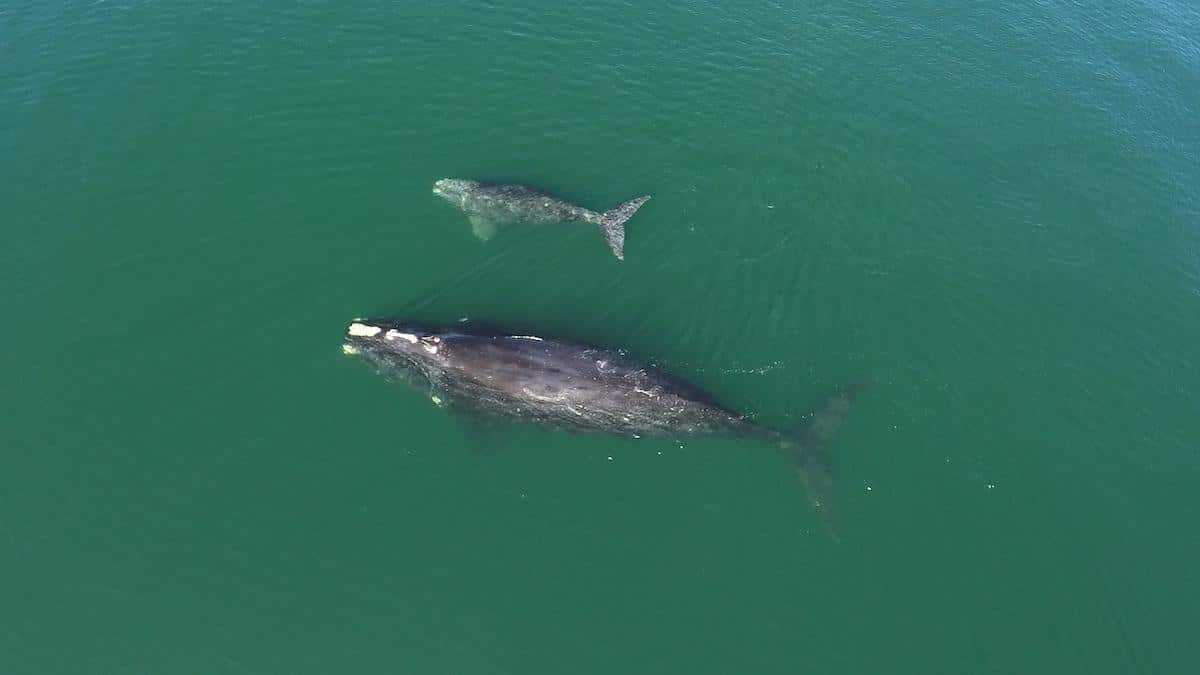 The 13th North Atlantic right whale calf with their mother off Wassaw Island, Georgia on Jan. 19, 2010. @GeorgiaWild, under NOAA permit #20556

The 14th and latest calf of the season was spotted Thursday off of Florida’s Amelia Island, News4JAX reported.

“What a way to start the weekend – a new right whale!” the National Oceanic and Atmospheric Administration (NOAA) Fisheries Southeast announced on Twitter.

What a way to start the weekend – a new right whale! Known mom "Champagne" and her calf were sighted off Amelia Island, FL yesterday. Champagne is 12 yo and this is her first documented calf.

Calf number 14 was born to a 12-year-old whale named Champagne and is her first known calf, the agency said.

The news came just two days after the 13th calf of the season was spotted off of Wassaw Island, Georgia, News4JAX reported. This baby was also born to a first-time mom who was 14 years old.

13 is lucky today! We have a new right whale calf – our 13th for the season! Mom and calf were sighted off Wassaw Island, GA yesterday. Mom is 14yo and this is her first known calf.

All of this is good news for the species, which ended 2020 on a low note. A NOAA report found that there were no more than 366 of the animals left alive. Then, the first known calf of the season washed up dead off the North Carolina coast in November.

However, things have begun to turn around. The species has so far had its best calving season in years, Defenders of Wildlife noted in a statement. Only 22 calves were reported between all of 2017 to 2020. The number of new calves this season is now more than half that total, and there are two months left during which scientists expect more babies will be born.

Despite the baby boom, conservationists noted that the species is not out of the woods. The whales have been undergoing an Unusual Mortality Event since 2017, with 32 whales dying in Canadian and U.S. waters and 14 sustaining non-survivable injuries. The leading causes of these casualties were vessel strikes and entanglements in fishing lines. In January, a right whale was seen entangled in fishing gear off the Georgia coast.

“While these births are an encouraging sign, the continued threats underscore that we still have to redouble our efforts to protect these vulnerable babies and their mothers,” Defenders of Wildlife senior attorney Jane Davenport said in the statement.

The same week as the 13th and 14th births were announced, NOAA released a report finding that vessels were ignoring both suggestions and requirements to slow down in areas where right whales might be present. This has prompted conservation groups to call for more protections.

“NOAA agrees that more needs to be done to protect North Atlantic right whales from vessel strikes,” Oceana campaign director Whitney Webber said in a statement emailed to EcoWatch. “Now it’s time for the federal government to act. Voluntary speed restriction zones must be made mandatory, and the current mandatory speed restriction zones must be expanded and enforced. Oceana calls on NOAA to update the shipping regulations to protect these rare whales before it’s too late.”

Defenders of Wildlife also acted by joining with other conservation groups Jan. 13 to sue NOAA over its failure to expand slow-down zones for the whales.

“Right whales face a daily gauntlet of fishing ropes and speeding vessels, which together have caused the deaths of more than 200 right whales in the last decade alone,” Davenport said in the Defenders of Wildlife statement. “We’re killing right whales far faster than they can reproduce. Unless we move quickly to abate these threats, we’re running out of time to save the species from extinction.”