​NOAA Plan Might ‘Delay’ Right Whales Extinction, But Not Save Them, Experts Warn 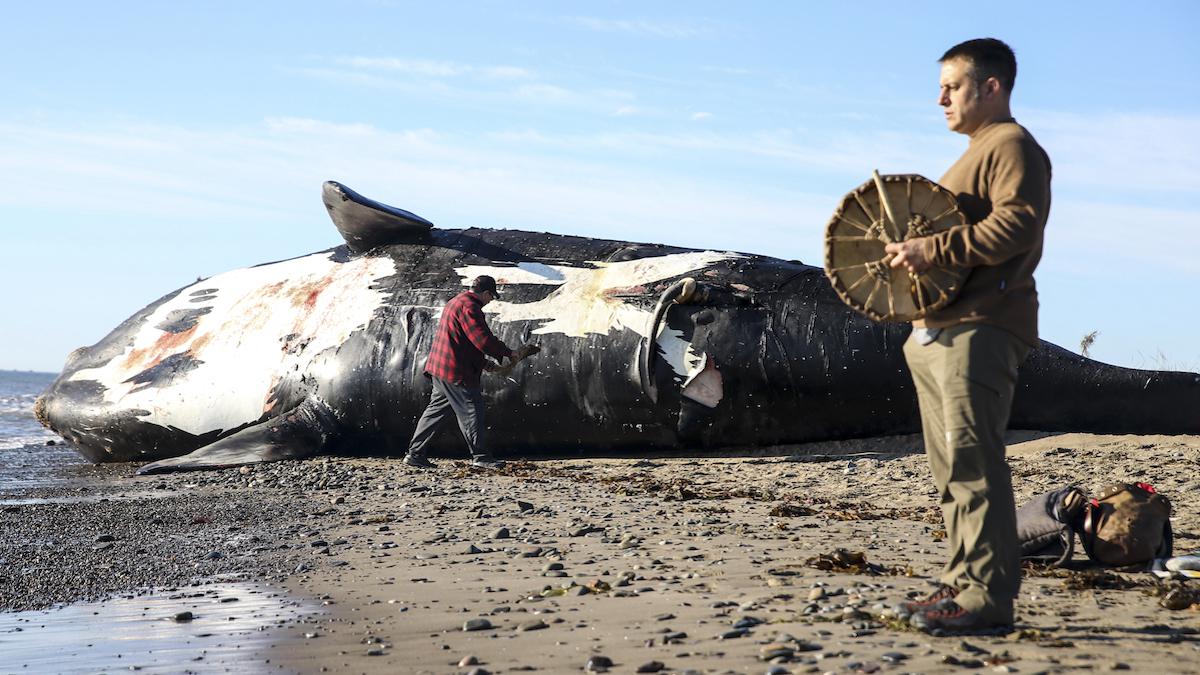 Conservation advocacy groups on Tuesday responded with alarm and disappointment to the Biden administration’s long-awaited new rule for protecting the endangered North Atlantic right whales from Maine to Florida.

“After four years of rule-making, it’s disheartening that despite the legal obligation to be stewards of North Atlantic right whales and help them recover, the government has once again failed to take aggressive action,” said Oceana campaign director Whitney Webber.

The U.S. government estimates there are fewer than 370 North Atlantic right whales left in the world. Webber highlighted that the species is “sliding closer toward extinction due to known, human-caused risks, including fishing gear entanglements.”

“In February of this year, an 11-year-old male known as ‘Cottontail’ was found dead off South Carolina after being entangled in fishing gear for months,” she said. “With only around 360 whales remaining, there is no room for shortsighted solutions. We can recover this species, but it will take meaningful, strong regulations to keep deaths below one per year — the level the National Marine Fisheries Service says is needed to support recovery.”

The plan aims to reduce deaths and serious injuries to North Atlantic right whales, fin whales, and humpback whales “in northeast commercial lobster and crab trap/pot fisheries to meet the goals of the Marine Mammal Protection Act and the Endangered Species Act.”

Since 2010, 34 right whales have died and 16 have been seriously injured, principally due to getting entangled in fishing gear or struck by vessels, according to NOAA Fisheries.

In a statement Tuesday, NOAA Fisheries detailed its new regulations that the agency expects will reduce the risk of death and injuries resulting from entanglement by 69%:

The required gear modifications will take effect May 1, 2022 — the start of the American lobster and Jonah crab fishing year — and changes to seasonally restricted areas will go into effect 30 days after the rule’s publication.

“This rule represents years of work and collaboration on the part of fishermen, scientists, conservationists, and state and federal officials to develop strategies to reduce the dangers faced by North Atlantic right whales,” said Janet Coit, assistant administrator for NOAA Fisheries, acting assistant secretary of commerce for oceans and atmosphere, and deputy NOAA administrator.

Michael Pentony, regional administrator for NOAA’s Greater Atlantic Regional Fisheries Office, said that “the new measures in this rule will allow the lobster and Jonah crab fisheries to continue to thrive, while significantly reducing the risk to critically endangered right whales of getting seriously injured or killed in commercial fishing gear.”

However, both the fishing industry and conservation advocates are critical of the new rule — which, as the Portland Press Herald pointed out, “does not include measures to help prevent ship strikes or reduce mortality and serious injuries in Canadian waters, which together account for the majority of right whale deaths.”

Noting that the new regulations will make a 950-square-mile area of the Gulf of Maine “off-limits to traditional lobstering from October through January,” the Press Herald reported Tuesday on officials’ concerns that the changes will threaten the state’s fishing industry.

Maine’s congressional delegation and Democratic Gov. Janet Mills issued a joint statement criticizing the “burdensome regulations,” saying in part that “we agree that we must protect the fragile right whale population, but we must do so without endangering human lives or livelihoods” and “there has not been a single right whale entanglement attributed to Maine lobster fisheries in nearly two decades.”

After being decimated by whaling, vessel collisions and entanglement in fishing gear now threaten the future of the approximately 360 remaining North Atlantic right whales. Add your name to protect them before it's too late: https://t.co/xfEtClsdbS #RightWhaleToSave pic.twitter.com/s3D1CKmKg3

The Center for Biological Diversity, which has challenged NOAA Fisheries’ failure to protect the species in court, noted the closures south of Nantucket — from February to April — and in the Gulf of Maine are seasonal, “despite evidence that right whales use the area year-round.”

Offering a broader critique of the new rule, Kristen Monsell, the center’s oceans legal director, declared that “we can’t save this rapidly declining whale population from extinction with half-measures like this.”

“This plan is better than nothing and a step in the right direction,” she said. “But we’ve already waited far too long to protect North Atlantic right whales from deadly entanglements. It’s time to get all vertical fishing lines out of important right whale habitat immediately and convert to on-demand ropeless fishing gear.”

The National Marine Fisheries Service’s overreliance on weak rope, which is designed to break with the strength of an adult whale, is insufficient because it continues to put calves and juveniles directly in harm’s way. Proven management tools that will reduce interactions with the roughly one million fishing lines are available, yet the government declined to consider these tools because they were “unpopular with stakeholders.” Oceana and its members are stakeholders in this crisis as well. This disregard for public comment by the Biden administration is disappointing.
Oceana is committed to ensuring North Atlantic right whales have meaningful protection from all threats across their range, from Florida to eastern Canada. As it stands, this rule leaves the whales vulnerable and jeopardizes their future, as well as the future of the U.S. lobster and crab fisheries, which could be shut down if North Atlantic right whales are not protected. There’s no time to waste — the rule must be strengthened immediately with expanded time/area management and effective monitoring if North Atlantic right whales are to survive.

“It’s good to see NOAA taking action to protect the endangered right whale, but unfortunately, the plan that was released today falls short,” he said. “By our reading, the net effect will be to delay the extinction of this beautiful, massive creature. What we need is a plan to save it.”

According to Blackledge, “The problem is that these rules would reduce the ‘risk of death and serious injuries caused by entanglement’ by 69%, and that’s not enough to enable this species to rebound.”

“We’re calling on NOAA and Secretary of Commerce Gina Raimondo to respond to our petition and use emergency powers to close key right whale habitats to fishing — most are seasonal closures and one would be year-round,” he added. “Let’s be the generation that protected the right whale, not the one that watched it slowly disappear.”