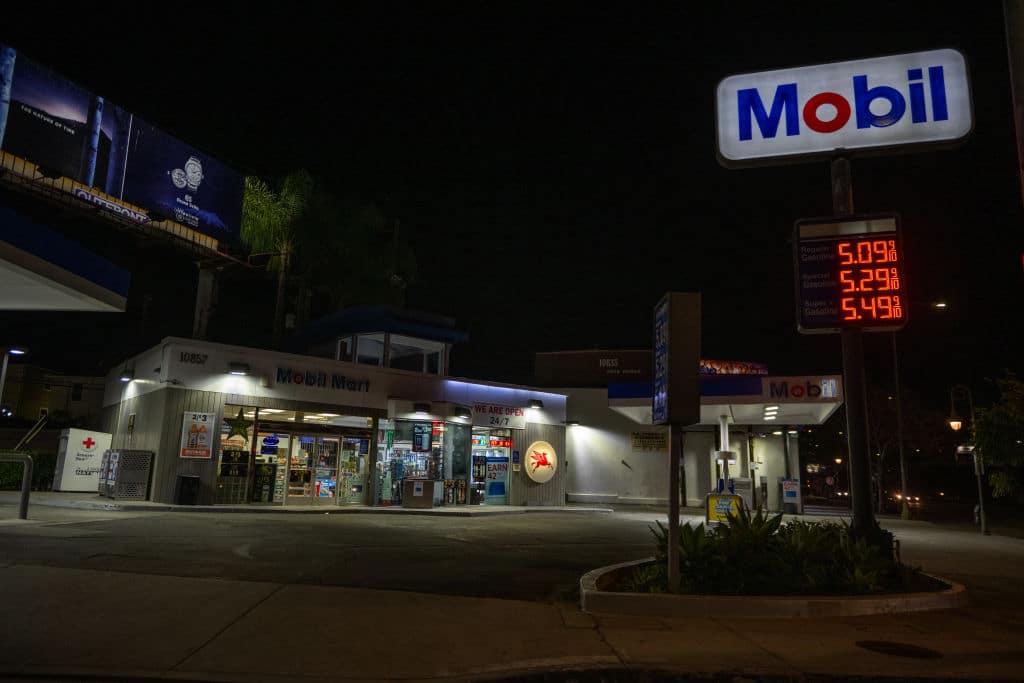 A Mobil Gas station sits empty on a Sunday night as prices show between $5.09- $5.49 a gallon on February 6 in Los Angeles. Alexi Rosenfeld / Getty Images

U.S. oil prices surged to a seven-year high last Thursday, rising to more than $90 a barrel, and this could be bad news for the fight against the climate crisis.

The surge comes a little less than two years after oil prices dipped below zero for the first time during the beginning of the coronavirus pandemic, when supply outstripped demand. However, since then demand has risen while producers have worked to moderate supply, as CNBC explained.

“The oil market is so tight that any shock to production is going to send prices soaring,” foreign-exchange company Oanda’s Ed Moya told CNBC. “OPEC+ production is on cruise control with their gradual increase strategy, which means oil seems like it’s going to make a run towards $100 oil pretty soon.”

Right now, one shock to production is the extreme weather event that has brought cold and snow to oil-producing regions in the U.S.

“The latest upswing was triggered by a cold snap in Texas, which is fueling concerns about production outages in the Permian Basin, the largest U.S. shale play. A year ago, a period of extreme cold weather had caused massive disruptions to oil production there,” Commerzbank commodity analyst Carsten Fritsch said in a note to clients reported by MarketWatch.

The winter storm has knocked out power to 350,000 homes and businesses in states including Texas, Tennessee and Arkansas, and more precipitation and ice is forecast for the eastern U.S. last Friday.

Another factor in the surging oil prices are worries over tension between Russia and the Ukraine, as well as instability in the Middle East, CNBC reported.

Finally, OPEC+ said last Wednesday it would not increase production to meet demand, but would instead stick to its original plan of upping production by 400,000 barrels a day, as CNN reported.

The rebound in oil prices is another example of how the falling energy use of the initial lockdown period has not yet eased a transition to a renewable energy economy. U.S. greenhouse gas emissions rose 6.2 percent in 2021 compared to 2020 levels, for example, rising faster than the economy rebounded. And the economic rebound means that global coal demand has risen to record levels, The New York Times reported.

High oil prices might mean that production increases after global investments in oil and gas projects fell by 30 percent in response to the pandemic. ExxonMobil said last Tuesday it would up its spending on new wells and other projects by as much as 45 percent. However, it’s also possible that high oil prices might drive consumers away from fossil fuels when possible, prompting them to purchase electric vehicles, for example.