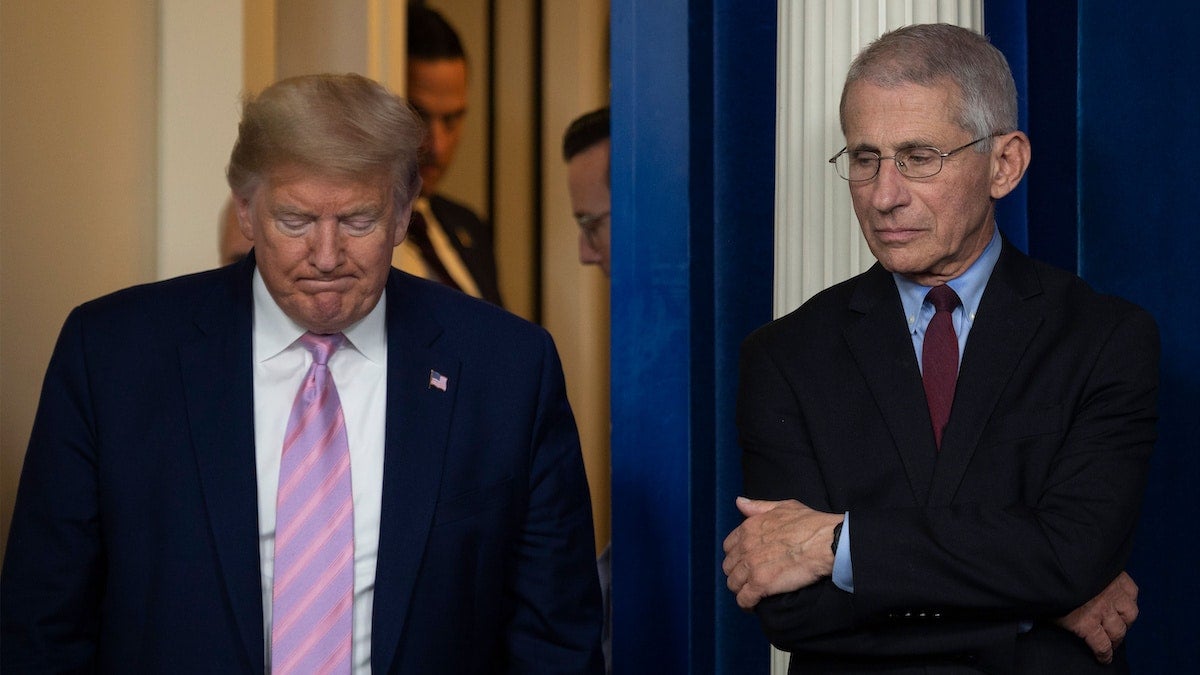 Trump arrives as Director of the National Institute of Allergy and Infectious Diseases Dr. Anthony Fauci looks on during a Coronavirus Task Force press briefing at the White House in Washington, DC, on April 4, 2020. JIM WATSON / AFP via Getty Images

President Trump attacked the nation’s top infectious disease specialist in a call with campaign staffers that several reporters were allowed to listen to on Monday. In the call, Trump said that Dr. Anthony S. Fauci was “a disaster.” He added that despite the evidence that coronavirus cases are once again rising across the country, the public was tired of hearing so much news about the virus, especially from “these idiots” in the government and scientific community, as The Washington Post reported.

Trump seemed irked by an interview that Fauci, the director of the National Institute of Allergy and Infectious Diseases, gave to 60 Minutes in which Fauci said he was not surprised that Trump contracted the coronavirus after attending a large event at the White House for Supreme Court nominee Amy Coney Barrett where attendees were not masked.

In many interviews, Fauci has touted the efficacy of wearing masks and social distancing, while warning that a failure to follow those safety measures could lead to a very difficult fall and winter as coronavirus and influenza intersect. The evidence suggests Fauci is correct, as the U.S. saw more than 70,000 new cases on Friday, its highest total in months, while the virus is gaining strength in Europe once again, as The New York Times reported.

In his broadside Monday, Trump dismissed those concerns about the virus, claiming that the public’s interest has waned.

“People are tired of COVID,” Trump said on the call, according to The New York Times. “I have the biggest rallies I’ve ever had. And we have COVID. People are saying: ‘Whatever. Just leave us alone.’ They’re tired of it.”

He tried to shift blame for the administration’s response by saying, “People are tired of hearing Fauci and all these idiots — these people, these people that have gotten it wrong,” Trump said, as NBC News reported. “Fauci’s a nice guy. He’s been here for 500 years. He called every one of them wrong. And he’s like this wonderful guy, a wonderful sage telling us how to respond to the pandemic. Fauci is a disaster. If I listened to him, we’d have 500,000 deaths. If we listened to him, we’d have 700-800,000 deaths right now.”

At the same time that Trump was issuing his attacks on the government’s medical experts, Fauci was receiving the National Academy of Medicine’s first-ever Presidential Citation for Exemplary Leadership in a virtual event, as CNN reported.

“We have a lot of challenges ahead of us and I can’t help thinking that we’re really going through a time that’s disturbingly anti-science in certain segments of our society,” Fauci said in his speech as he accepted the award, according to CNN.

Trump was not done with his attacks on Fauci. Later in the day, Trump took to Twitter to mock Fauci for his errant ceremonial first pitch for the Washington Nationals on opening day, as The Washington Post reported.

“Tony should stop wearing the Washington Nationals’ Mask for two reasons. Number one, it is not up to the high standards that he should be exposing,” Trump wrote on Twitter. “Number two, it keeps reminding me that Tony threw out perhaps the worst first pitch in the history of Baseball!”

Trump’s attack on one of the nation’s most revered doctors generated a swift backlash from both sides of the aisle.

The Biden campaign responded by saying, “Mr. President, you’re right about one thing: The American people are tired. They’re tired of your lies about this virus,” as The New York Times reported.

Senator Lamar Alexander, a Republican from Tennessee, called Fauci one of the country’s most distinguished public servants.

“If more Americans paid attention to his advice, we’d have fewer cases of COVID-19, & it would be safer to go back to school & back to work & out to eat,” Alexander wrote on Twitter.