The Big Fix—Now on DVD 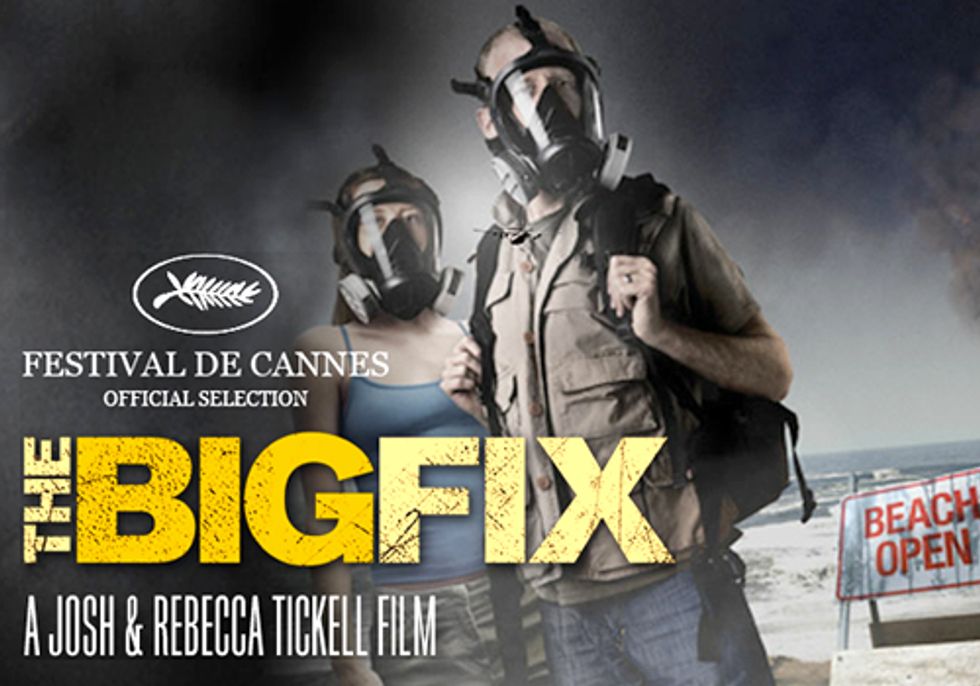 Last December I wrote a piece promoting the release of the outstanding feature documentary The Big Fix. Now I'm writing to let you know that if you haven't had a chance to see this film by Josh and Rebecca Tickell or have been wanting to share it with others, it is now out on DVD.

I've seen several films illustrating the impacts of the Gulf oil spill, but none so well portray the true aftermath of the 2010 BP oil spill, including the detrimental consequences that the spraying of the dispersant Corexit is having on all species living along the Gulf Coast. The film exposes the corruption behind the cleanup of the spill.

Interviews throughout The Big Fix reveal that after the Internal Revenue Service the second largest generator of money for the U.S. government is the collection of offshore oilfield revenues and royalties. In addition, BP is the single largest oil contributor to the Pentagon and many U.S. Congress members receive the majority of their campaign dollars from the fossil fuel industry or corporations closely tied with oil. It’s no wonder corruption runs rampant in the aftermath of this deplorable event.

The film has been featured at more than a dozen film festivals across the U.S., educating people on the powerful political and corporate systems that put profit before the health of people and the environment.

“We began by documenting an oil spill,” says Louisiana native Josh Tickell. "But the story we uncovered is one of corruption at the highest levels of the U.S. government and the deliberate deception of the American people.”

With reports still coming out, like the one from Al-Jazeera in April detailing seafood deformities caused by residual impacts of at least 4.9 million barrels of oil in the Gulf following the explosion and at least 1.9 million gallons of Corexit 9527 oil dispersant—a toxin known to be mutagenic and hemolytic (blood thinning)—sprayed to dissolve the visible oil slicks, it's clear that we need to keep the issues surrounding the largest oil spill in America's history at the forefront of people's minds. The Big Fix is an excellent way to engage more people in the fight against the corruption and pollution of fossil fuels and Big Oil.

In May, Greenpeace USA released shocking photos that show graphic evidence of the destruction done to endangered sea life in the Gulf by the BP disaster. The photos, received via a Freedom of Information Act (FOIA) request filed in August 2010, appear to be part of the effort to collect evidence for the prosecution of BP and others, but have never been published by the government.

“We’ve got shrimp with no eyes, fish with tumors, fish with oil in their guts—this disaster is happening right now,” said Dean Blanchard—once the largest processor of brown shrimp in the U.S.—in The Big Fix. Despite claims from the Louisiana Department of Fisheries and Wildlife that the fish are safe to eat, Blanchard’s liability insurance was recently cancelled. “I’ve been in business 25 years. I grew up on a shrimp dock, I never had a problem getting insurance, now nobody will insure us,” Blanchard said.

Up to 30 percent of the nation’s seafood in a given year comes from Louisiana. Toxicologists studying the fish from Louisiana waters are finding heightened levels of carcinogens, genetic mutations and dermal lesions.

The Big Fix details the complicit behavior of the U.S. government in the long-term use of Corexit. In an unexpected twist of fate, Co-Director/Producer Rebecca Harrell Tickell became severely ill after being exposed to the oil and Corexit mixture while filming. Her health struggle is cataloged in the film.

“Making this movie and living with the life-altering consequences,” said Harrell Tickell, “changed everything I thought I knew about America.”

Our work is not done in the Gulf region. We need to continue educating our friends, neighbors and family on the consequences of Big Oil and work to prevent deepwater drilling and drilling in the Arctic Ocean. We need to encourage our elected officials and government agencies to enforce strict regulations that can make offshore drilling safe.

I strongly encourage you to order your copy of The Big Fix on DVD. Special DVD bonus features include an exclusive Jason Mraz interview, How to Get Your Car Off Oil video, deleted scenes, directors’ commentary, an update from the directors and secret features.

For more information or to order a DVD, click here.