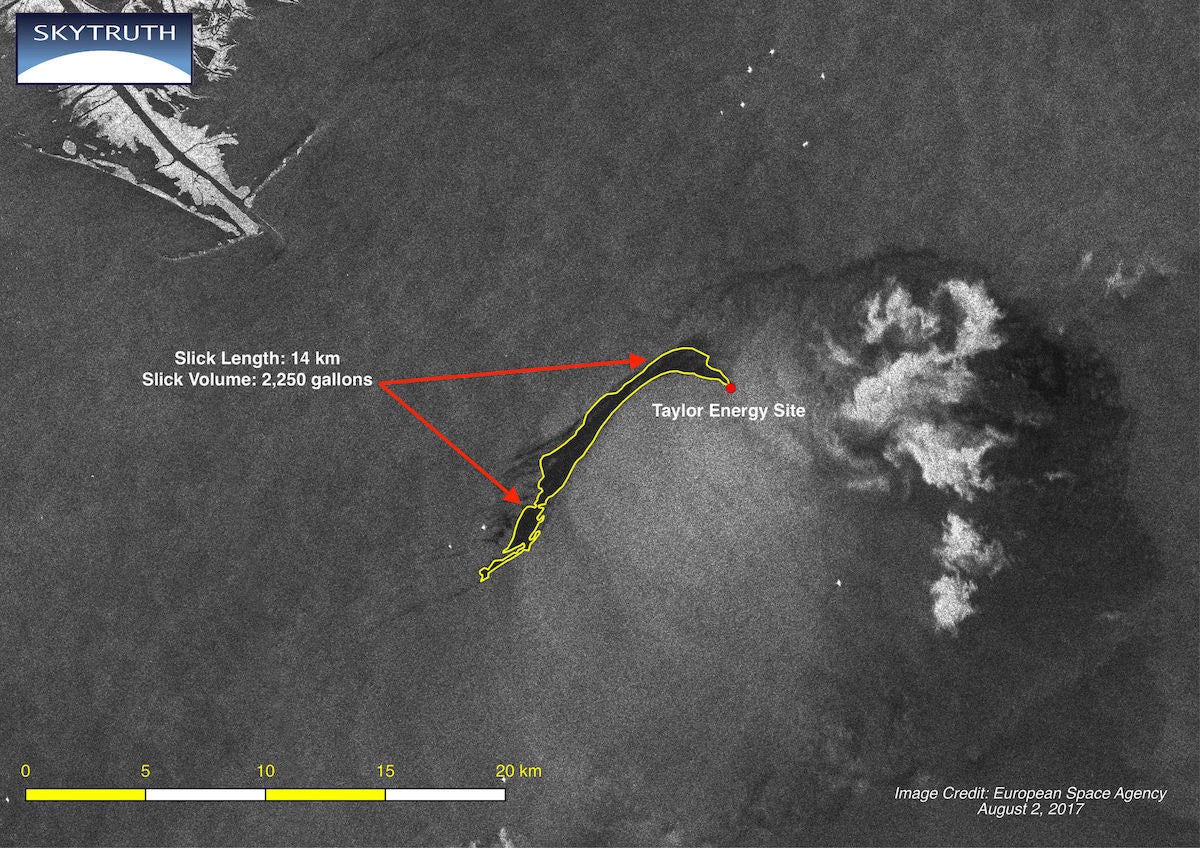 The U.S. Coast Guard has ordered Taylor Energy Co. to clean and contain a
14-year chronic oil spill in the Gulf of Mexico or face a fine of $40,000 a day.

Environmentalists
had warned about the unrelenting leak for years after the Gulf Restoration Network and the watchdog group SkyTruth discovered oil slicks via satellite imagery while investigating the BP Deepwater Horizon spill in 2010.

The environmental catastrophe was brought to national attention last month when The Washington Post reported that Taylor’s former production site is releasing up to 700 barrels (29,400 gallons) of oil per day into the gulf and could eventually surpass the Deepwater Horizon spill as the largest offshore disaster in U.S. history.

The massive spill and ongoing oil pollution in the gulf’s waters was even the subject of a recent episode of the show “Patriot Act” hosted by Hasan Minhaj.

Check out this clip featuring SkyTruth’s work tracking the Taylor Energy spill and oil pollution throughout the Gulf of Mexico from yesterday’s episode of Patriot Act with Hasan Minhaj on Netflix @patriotact on @netflix https://t.co/CjeUQFpW91 pic.twitter.com/2JSnfXphHP

On Oct 23, a day after the Post’s report was published, the U.S. Coast Guard ordered Taylor to stop the leak, WWL-TV New Orleans was first to report. Taylor was ordered to “institute a … system to capture, contain, or remove oil” or face the $40,000-per-day penalty, according to details of the order published by The Washington Post on Tuesday.

The spill stems from a Taylor-owned production platform located 12 miles off the coast of Louisiana that was toppled by an underwater mudslide caused by Hurricane Ivan in 2004.

Left unchecked, the discharge could continue for another 100 years or more until the oil in the underground reservoir is depleted, a government agency warns.

After 14 years, the @USCG says an ongoing #oilspill in the #GulfofMexico needs to be contained: “The worst-case estimate of the daily volume of release far exceeds previous estimates and is in the order of hundreds of barrels per day.” @davidhammerWWL @HealthyGulf @sejorg @WWLTV pic.twitter.com/Zt1PxDiJ61

Taylor balked at the government’s order. “The inflated volumes are completely inconsistent with the scientific record built over a decade by the world’s leading scientists, including those regularly relied upon by the government,” a company spokesperson told the Post.

The energy firm once claimed the leak was as little as 2 gallons of oil per day until a 2015 Associated Press investigation revealed evidence that the leak was much worse than the company publicly reported.

The Coast Guard told Taylor that “the worst-case estimate of the daily volume of release far exceeds previous estimates and is in the order of hundreds of barrels per day.”

“The time to clean this up was 14 years ago,” he said. “Taylor Energy has shown nothing but negligence all this time.”

BREAKING: Coast Guard ordered Taylor Energy to create and deploy an oil containment device over their 14 year old oil spill. The order came one day after Gulf Restoration Network broke the story on the front page of the Washington Post: https://t.co/PEX9z3doy4 #CleanItUpTaylor pic.twitter.com/WbW5S25RzE

Taylor and federal officials have established a $666 million trust to pay for the leak response. Although the company has spent hundreds of millions trying to halt the flow, it has proven difficult to cap the affected wells that are deep underwater and buried beneath 100 feet of mud.

Taylor has plugged only nine of the 28 wells at its platform, the Post reported.

Meanwhile, Taylor has mostly ceased to exist as a company. President William Pecue wants to recover $450 million of the trust, arguing the spill cannot be contained.

“I can affirmatively say that we do believe this was an act of God under the legal definition,” Pecue said in 2016.

The Coast Guard’s order comes as the Trump administration plans to open up U.S. coastal waters to offshore drilling and as hurricanes are predicted to become more destructive due to climate change.

Correction: Since the publication of this post, EcoWatch has learned that WWL-TV New Orleans’ David Hammer was the first to report news of the U.S. Coast Guard’s order. The article has been updated to include this information.