Oil Spill in the Gulf of Mexico, Still Spilling After Nearly a Decade 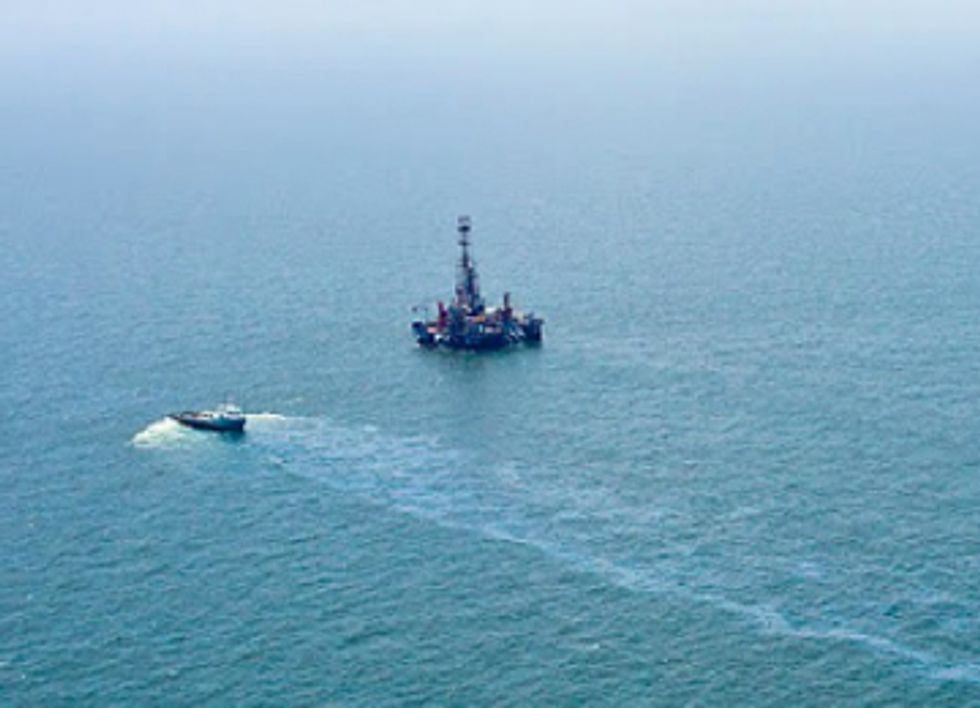 The 2013 hurricane season is now upon us, and it's predicted to be a doozy this year. Which got us to thinking ... Remember that strange, persistent little oil slick about 12 miles offshore that SkyTruth discovered on satellite imagery during the BP oil spill in 2010, that was not related to BP's Deepwater Horizon disaster?

Remember how SouthWings flew photographer J. Henry Fair out there and came across a deepwater drill rig with a miles-long oil slick next to it?

When we published this, an interesting story emerged: We had found a chronic, continuous oil spill in the Gulf emanating from oil wells that were serviced by a platform at this location. "Platform 23051," as we called it (because that's how it was identified by government data), no longer existed. It had been hit by a seafloor mudslide triggered by Hurricane Ivan way back in September 2004. That's right, six years earlier. And the damaged wells, now buried under the mud, were being slowly found, re-entered and plugged with cement by their owner—an LLC named Taylor Energy Company—using a leased drill rig called the Ocean Saratoga.

The rig disappeared for a while, then re-appeared in November 2010. It was still on the scene in March 2011, when Greenpeace flew over the site and took some photos. But we had indications from the Automatic Identification System vessel-tracking data that the rig had departed by June 2011. Periodic aerial overflights conducted by Gulf Monitoring Consortium and On Wings of Care, and radar satellite images acquired since June 2011, have shown no rig working to plug the wells since Ocean Saratoga's departure. The May 2013 status report from Diamond Offshore shows the rig is contracted to work elsewhere.

One thing, however, has remained constant at the site: It's still leaking oil and forming a persistent, miles-long slick that is routinely visible on satellite images. Occasionally it reaches out more than 20 miles from the source.

Taylor is required to report the size and location of their oil slick to the Coast Guard's National Response Center (NRC) on a daily basis. We've compiled all of their reports, as well as our own observations from overflights and satellite imagery. What we see on satellite images consistently contradicts Taylor's own reports, suggesting they are systematically and significantly underreporting the size of the slick. And our analysis shows that the total spill from the Taylor site may have exceeded 1 million gallons by February 2012.

In 2013, the satellite experts at the National Oceanic and Atmospheric Administration (NOAA) began to report their analyses of the Taylor slick to the NRC as well (the first report we noticed from NOAA came on April 7). They, too, are reporting slicks significantly bigger than what Taylor is reporting. The latest example: On June 1 at 9:00 a.m., Taylor reported a slick 200 feet wide and 6.5 miles long. But NOAA reported a slick one mile wide and 20.2 miles long on a satellite image taken at 11:45 a.m., less than three hours later. NOAA's slick is more than 80 times bigger than what Taylor reported. And if we assume the slick is, on average, only 1/1000th of a millimeter (1 micron) thick, that amounts to at least 13,800 gallons of oil on the water. Yet the federal government has publicly stated that the leaking wells cumulatively spill only about 14 gallons per day.

We assume NOAA analysts were looking at this MODIS/Terra satellite image taken at 11:45 a.m. local time on June 1. We measure the observable slick to be 21.4 miles long, reaching a maximum width of just over 5,100 feet but tapering to less than 1,500 feet at each end. Still, it is significantly bigger than Taylor reported:

Measurement shows slick extends more than 21 miles from the source.

Something's fishy here. But no matter whose numbers you believe, one nagging question is begging to be answered: When are these wells going to be permanently plugged? As time goes by, it looks like the answer is: Never—we're going to let them leak until the reservoir effectively bleeds out. How can this be acceptable to federal government regulators and the politicians of Louisiana?

Those rushing to embrace drilling in the waters off Virginia, Alaska and elsewhere in the U.S. might want to slow down and take a good hard look at this ongoing travesty in the Gulf of Mexico.