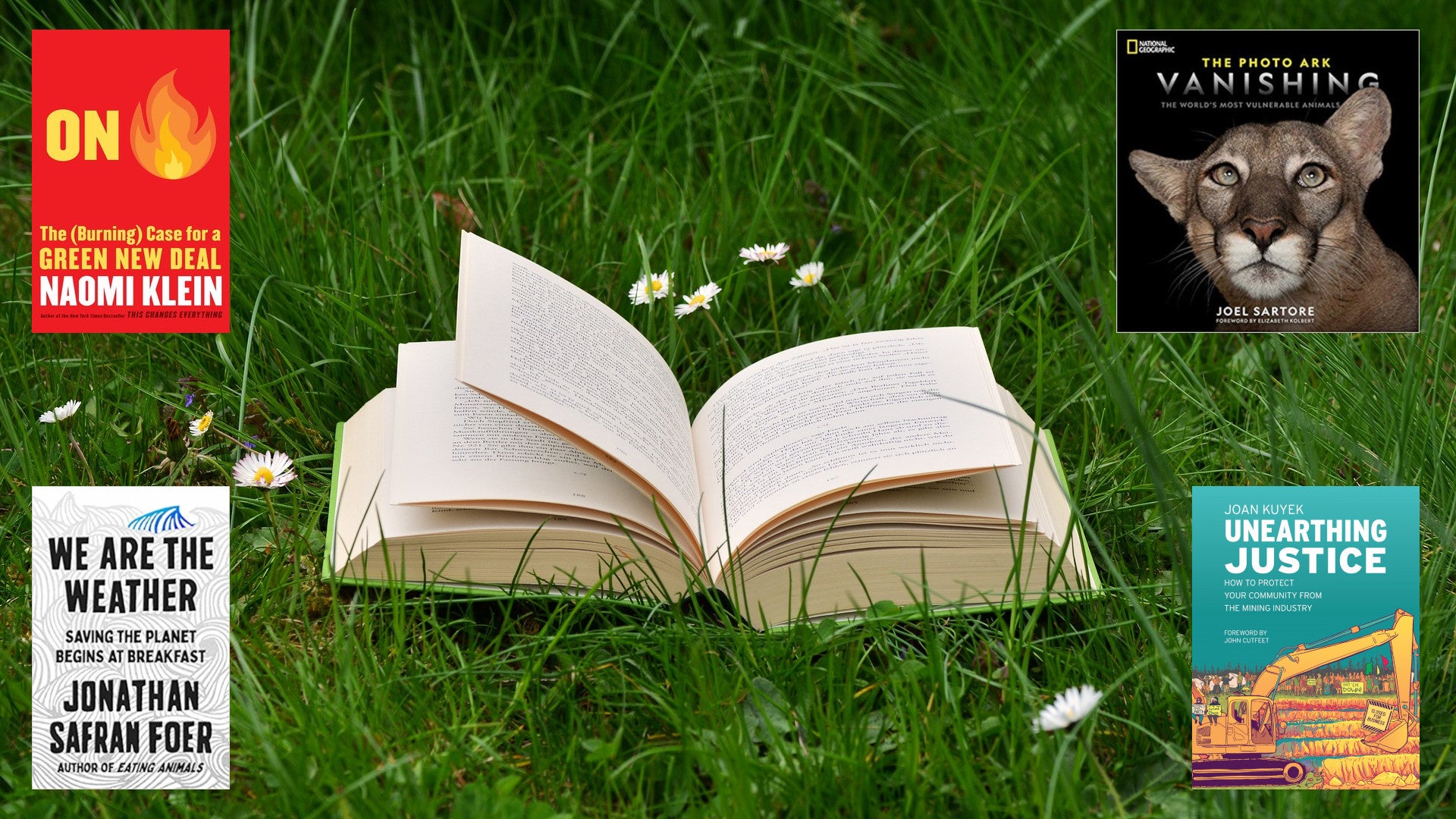 September has arrived, summer vacation season is over and it’s time to get stuff done — not just for the month ahead but for the future of the planet.

With that in mind, this month sees the publication of an amazing array of books on a wide range of environmental issues, covering everything from climate change to burning rainforests to protecting our water. We’ve combed through the catalogs to pick the 13 best new eco-books coming out in September, including titles from an impressive team of experts and award-winning authors. Check out our list below, pick the ones that are best for you or your family, and read up on new ideas for fixing what we’ve broken — then get to work.

To start off our list, this month brings not one but two books about the need for a Green New Deal.

First up, Shock Doctrine author Naomi Klein offers us On Fire: The (Burning) Case for a Green New Deal. This collection of new and previously published reports examines the state of the environment around the world, ranging from the Great Barrier Reef to the Vatican. And as you’d expect from a firebrand like Klein, this impassioned, justice-oriented book presents a call for immediate transformation of the systems that have produced the climate crisis (and so many other crises along the way).

Taking a slightly different path, economic theorist Jeremy Rifkin brings us The Green New Deal, a cautionary tale that warns the world economy (if not the world itself) will fall apart in under ten years if we don’t take immediate action to mothball extractive energy technologies. Subtitled “Why the Fossil Fuel Civilization Will Collapse by 2028, and the Bold Economic Plan to Save Life on Earth,” Rifkin’s book serves as a call for world governments to decarbonize their economies, post-haste.

The Missing Lynx: The Past and Future of Britain’s Lost Mammals by Ross Barnett — Eurasian lynx were wiped out in Britain 1,300 years ago, but there’s now an effort to bring them back to their old stomping grounds. Could other species, even megafauna, soon follow? Barnett look at the lynx and other extinct British species to see what we’ve lost following their disappearance from the ecosystem and what we might gain from rewilding projects. Along the way, he asks if these types of projects should even be conducted at all. That’s a timely, important question in this era when we’re even talking about brining extinct species like the mammoth back to life.

Gone Is Gone: Wildlife Under Threat by Isabelle Groc — Aimed at teenage readers, this profusely illustrated and thoroughly researched book looks at endangered species around the world — and what we can do to help them. Conservation icon Jane Goodall provides the foreword. (For juvenile readers, check out a similarly themed book out this month: Survival by artist Louise McNaught and writer Anna Claybourne.)

Vanishing: The World’s Most Vulnerable Animals by Joel Sartore — Critically endangered and extinct-in-the-wild species get the spotlight in this stunning, 400-page photography book, the latest in Sartore’s “Photo Ark” project for National Geographic. This could be your last chance to see many of these species, so take some time to linger on each image and reflect on the very real faces of impending extinction.

We Are the Weather: Saving the Planet Begins at Breakfast by Jonathan Safran Foer — If we want to fight climate change, we (individually and collectively) need to put down the breakfast sausages and rethink many of our other agricultural products. A stylishly written and thought-provoking book from the author of Everything Is Illuminated and Eating Animals.

The Geography of Risk: Epic Storms, Rising Seas, and the Cost of America’s Coasts by Gilbert M. Gaul — Hoo boy, the coastal destruction coming our way due to climate change and sea-level rise is going to be expensive…and taxpayers will carry the costs. Gaul, a Pulitzer Prize-winner, recounts the history of coastal development (or over-development, to be precise) and lays out the case for changing the way we regulate and subsidize risky construction.

Whose Water Is It, Anyway? Taking Water Protection Into Public Hands by Maude Barlow — One of the world’s most notable water-justice activists provides a step-by-step guide to help communities keep themselves from going dry due to the actions of irresponsible companies and governments. (Check out our interview with Barlow.)

Unearthing Justice: How to Protect Your Community From the Mining Industry by Joan Kuyek — Covering everything from how to stop a new mining project to figuring out how to clean up an abandoned mine, this important book offers activists a primer for taking on all manner of extractive industries that can harm human health and the environment.

Salmon and Acorns Feed Our People: Colonialism, Nature and Social Action by Kari Marie Norgaard — A sociological look at North American colonialism, focusing on the Karuk Tribe of northern California and their political struggles for environmental justice and food sovereignty.

And Two More for Good Measure:

Waste by Kate O’Neill — A simply titled book about a very complex issue: What do we do with all of our stuff? From food waste to plastic recycling to the remnants of our ubiquitous electronics, O’Neill examines the politics and future of what we throw away.

Rainforest: Dispatches From Earth’s Most Vital Frontlines by Tony Juniper — A gorgeous, thoughtful and increasingly necessary book examining the roles that rainforests around the world play in regulating our planetary systems. Juniper, a noted environmentalist who has spent decades working on rainforest conservation, devotes a good portion of this book to the threats that human-caused fires pose to these essential ecosystems — a timely topic, to say the least.

That’s our list for this month, but don’t stop here: You can find dozens of other recent eco-books in the “Revelator Reads” archive.

John R. Platt is the editor of The Revelator. An award-winning environmental journalist, his work has appeared in Scientific American, Audubon, Motherboard, and numerous other magazines and publications.