Roundup Ready GMO Grass Coming to a Lawn Near You? 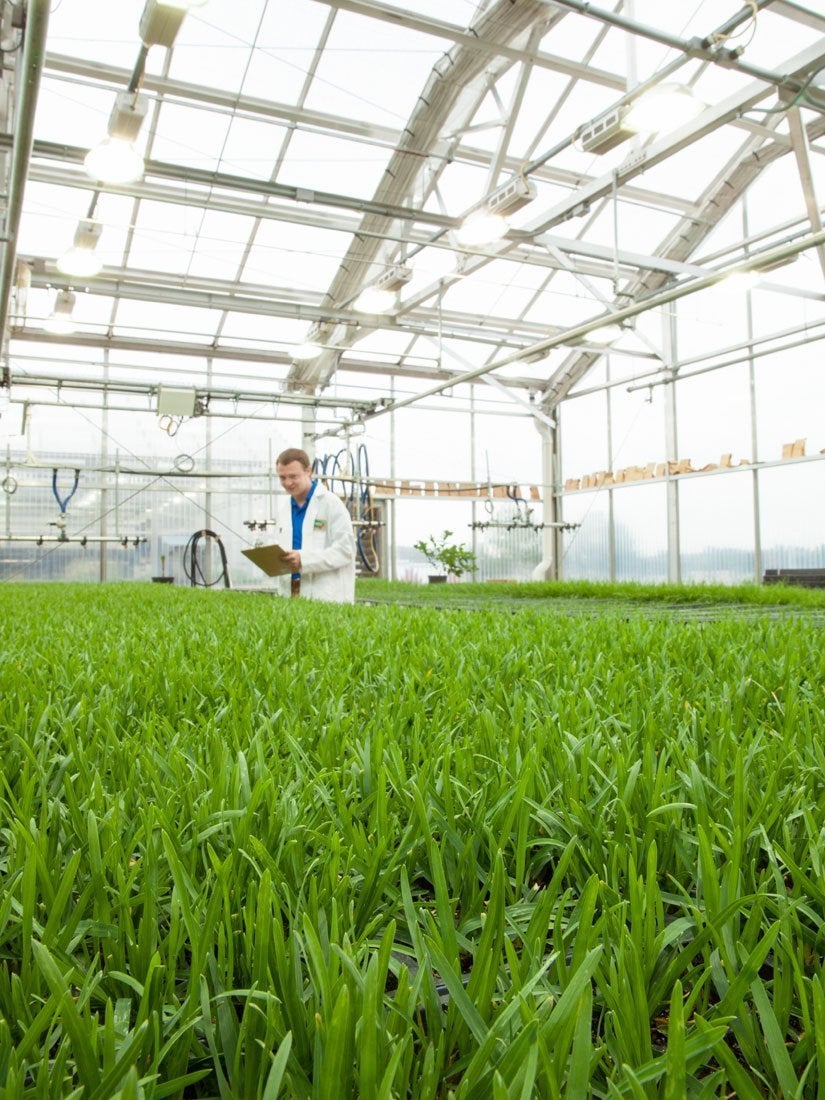 This latest effort follows Scotts’s
first fiasco with GMO turf. In 1997, the lawn care company teamed up with Monsanto to create GMO grass for golf courses. Unfortunately, their bio-enhanced creeping bentgrass escaped from field trials into the Oregon wild in 2003, thus eliminating any chance of federal approval for commercial use, as the New York Times reported in 2006.

Scotts was fined $500,000 for the incident but their lab-grown grass is still found in parts of Oregon, and has sparked concerns from local residents and organic livestock farmers who are worried that the hard-to-eradicate grass could invade pastures or contaminate non-GMO hay or grain fields.

According to
Forbes, trials are already underway for Scotts’s latest Roundup Ready grass that grows at half the speed of conventional grass. The company hopes the novel grass will enter the market in three years. As the publication detailed:

Scotts’s new GMO grass is an example of a company taking advantage of a new legal loophole that has allowed certain types of GMOs, such as the CRISPR-edited white button mushroom, bypass government regulations. This growing trend in biotechnology has critics speaking out mainly because these GMOs fall outside of regulatory authority.

“They are using a technical loophole so that what are clearly genetically engineered crops and organisms are escaping regulation,” Michael Hansen, a senior scientist at Consumers Union, told the New York Times last year about Scotts’s GMO grass, adding that the plants “can have all sorts of ecological impact and no one is required to look at it.”

Beyond its ability to spread quickly, beyond its potential impact on organic farmers, even more troubling is the fact that once Scotts Roundup Ready grass hits the market, it will lead to a dramatic increase in the use of Roundup, already the
most widely used—and potentially harmful—herbicide in the world.

GMO Free USA has previously urged a
boycott on Scotts Miracle-Gro and has called on gardening centers such as Home Depot and Lowes to not sell the product:

GMO Roundup Ready grass will result in a further increase in the use of Roundup, which has already contaminated our groundwater and drinking water. Imagine your children and pets frolicking around in a sea of herbicidal poison. Because of potential widespread use and inevitable contamination, the grass is likely to be eaten by grass grazing animals. There has been no toxicity testing and the potential harm to animals eating this GMO grass is unknown. Will we be saying, “good-bye,” to pasture raised meat?

Over 60 million acres of farmland in the U.S. have been infested with Roundup resistant superweeds, leading to ever increasing applications of Roundup and additional toxic herbicides. Homeowners across America are being led down the same path of chemical warfare in their own backyards. 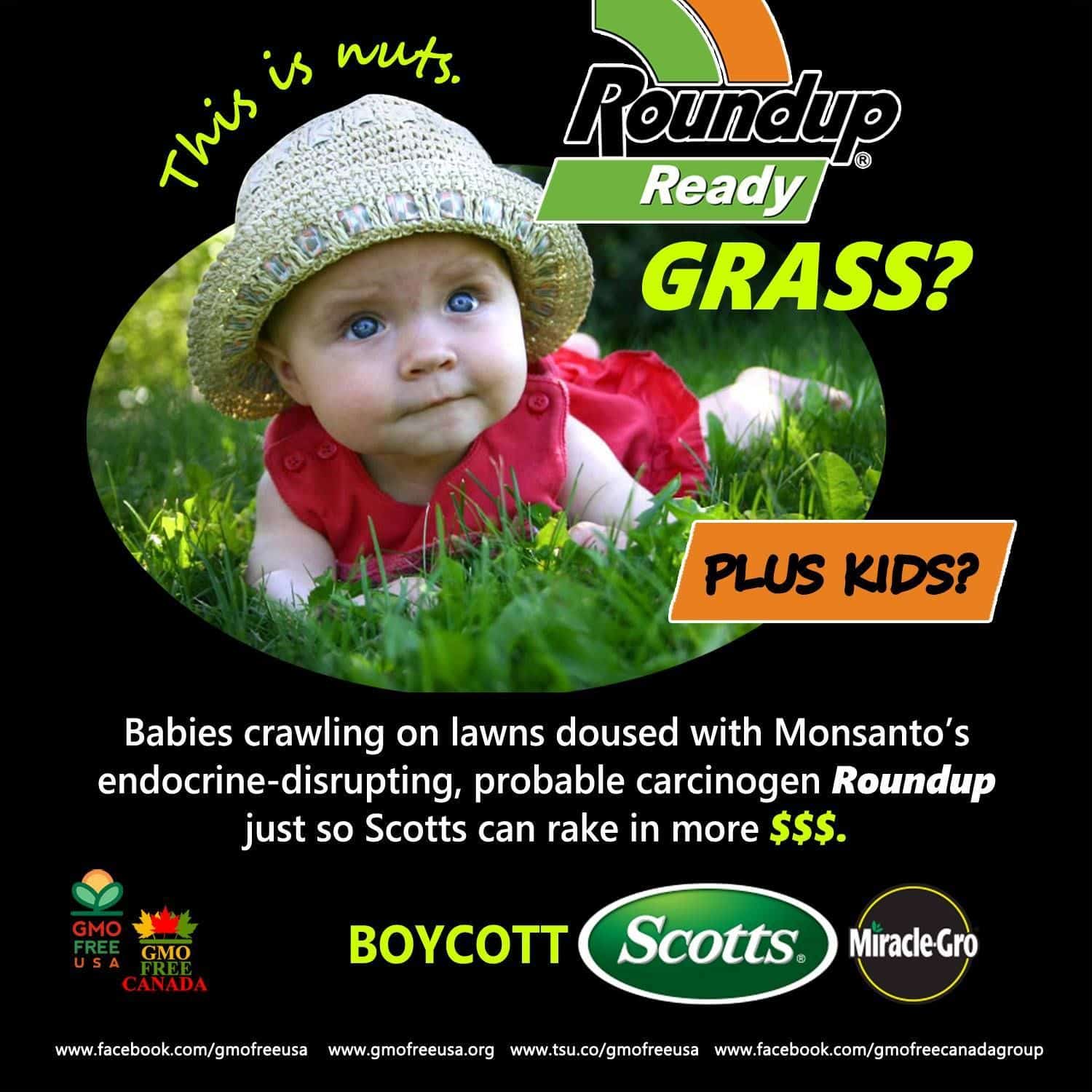 GMO Free USA has called on a boycott on Scotts Miracle-Gro: “You can spray your whole yard with Roundup and your grass won’t die. Then your children and pets can frolic in carcinogens.”GMO Free USA

Interestingly, Bloomberg reported earlier this year that Monsanto and Scotts have petitioned the USDA to remove restrictions on the creeping bentgrass that was inadvertently set wild from the lab more than 10 years ago. They are not seeking to sell the grass but to destroy it. Scotts spokesman Jim King told Bloomberg they want deregulation so when the grass is found growing wild, it won’t trigger environmental concerns and can be eradicated like any other weed.

Nathan Donley, Ph.D., a scientist with the Center for Biological Diversity, wrote for Oregon Live that after all these years, Monsanto and Scotts are still fighting the invasive bentgrass with “herbicides even more toxic than Roundup.” He adds that the companies are seeking deregulation because “if the USDA grants their petition, the ongoing invasion suddenly becomes Oregon’s problem, not Scotts’ and Monsanto’s.”

Concerns about GMOs aside, in previous EcoWatch posts, we mentioned how wasteful and purely ornamental lawns can be. California residents, for instance, are encouraged to let their turf go brown in order to preserve the drought-ridden state’s precious water.