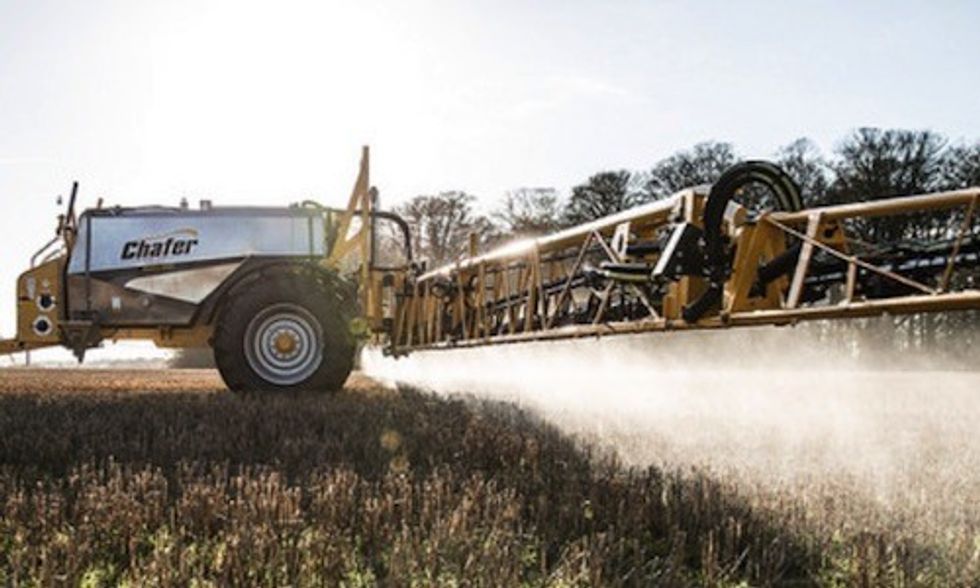 Glyphosate, the main ingredient in the Monsanto's flagship product Roundup, is now the "most widely applied pesticide worldwide," according to a report published today in the peer-reviewed journal Environmental Sciences Europe.

Globally, glyphosate use has risen almost 15-fold since "Roundup Ready" crops were introduced in 1996, the paper noted. These crops, such as soy, corn, canola, alfalfa and cotton, are genetically engineered to withstand direct applications of Roundup, as the product kills only the weeds.

"Genetically engineered herbicide-tolerant crops now account for about 56 percent of global glyphosate use," agricultural economist Charles M. Benbrook, PhD, and author of the study wrote in his paper. "In the U.S., no pesticide has come remotely close to such intensive and widespread use."

According to the study, two-thirds of the total volume of glyphosate applied in the U.S. from 1974 to 2014 has been sprayed in just the last 10 years.

"The dramatic and rapid growth in overall use of glyphosate will likely contribute to a host of adverse environmental and public health consequences," Benbrook claimed.

In his paper, Benbrook cited other scientific studies linking glyphosate exposure to adverse liver and kidney problems, as well as non-Hodgkin lymphoma.

Another problem rising from glyphosate use is the rise of “superweeds" that are resistant to herbicides. A 2013 report from Food & Water Watch found a connection between the rapid proliferation of genetically engineered crops and affiliated pesticides in the U.S., and the rise of herbicide-resistant “superweeds" that have led to the steadily increasing use of more dangerous herbicides.

Monsanto is facing a slew of criticism from environmentalists as well as mounting class-action lawsuits over the controversial chemical.

In September, two separate U.S. agricultural workers slapped Monsanto with lawsuits, alleging that the company caused their cancers. They also argued that the company “falsified data" and “led a prolonged campaign of misinformation" to convince the public, farm workers and government agencies about the safety of Roundup.

Monsanto said that there was nothing new in the Benbrook's study, according to Horticulture Week.

Benbrook hopes his paper will "stimulate more research on glyphosate use, and human and environmental exposure patterns, to increase the chance that scientists will quickly detect any problems that might be triggered, or made worse by glyphosate exposure."

Monsanto, however, has long maintained the safety of their widely popular product, which generated $4.8 billion in 2015 revenue. The agribusiness giant has also vehemently denied glyphosate's link to cancer, demanding a retraction of the IARC's report and also filing suit last month to prevent California from listing the chemical as a known carcinogen.

"This report makes it clear that the use of glyphosate combined with the dominance of genetically engineered crops has produced an looming public health threat both in the U.S. and around the world," Mary Ellen Kustin, a senior policy analyst at Environmental Working Group, said in a statement.

"Farmers have sprayed billions of pounds of a chemical now considered a probable human carcinogen over the past decade. Spraying has increased to multiple times a year recently on the majority of U.S. cropland. The sheer volume of use of this toxic weed-killer is a clear indication that this chemical dependency is a case of farming gone wrong."

Peter Melchett, policy director at the Soil Association, agrees. “This research reveals that Monsanto's Glyphosate is now the most heavily used weed-killer in history, and use is sky-rocketing—nearly 75 percent of all Glyphosate ever sprayed on crops was used in the last 10 years," he said.

"This huge increase in chemical spraying is what we can expect if GM crops are ever grown in England. As well as being identified as a probable human carcinogen, the research notes that recent studies have made the connection between glyphosate exposure and a number of serious health effects as well as cancer, including the degeneration of the liver and kidney, as well as non-Hodgkin lymphoma. The research rightly questions the safety of using glyphosate on crops destined for people to eat just before they are harvested—a growing practice in the UK, which must end."

Deutsche Welle
Health + Wellness
Fall is with us and winter is around the corner, so the season for colds and flu has begun — joining COVID-19. monstArrr / Getty Images

Just as scientists are scoring successes in coronavirus research, new problems are on their way. Fall is with us and winter is around the corner, so the season for colds and flu has begun — joining COVID-19.