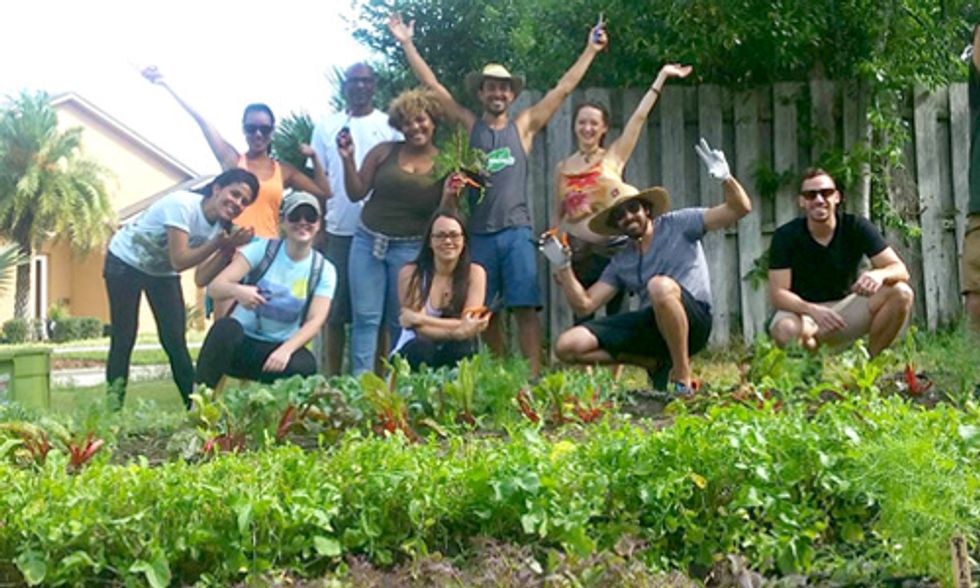 Eating local keeps communities healthy and reduces the miles that food travels to get to your plate, but what could be more local than plucking food right from your own yard?

Here's how it works: A landowner or renter with owner consent, can donate their chemical-free lawn to Fleet Farming. Once the site is assessed and approved for growing, Fleet Farms will schedule the installation of a food-producing plot at least 500 square feet in size.

The "farmlette" consists of row crops grown directly in the ground. Each landowner must sign a two-year agreement with a suggested donation of $500 to the cover start-up costs. In exchange for the donation of their turf, hosts are allowed to harvest a share of the produce. Fleet Farming is responsible for maintaining the plot but the hosts are encouraged to pitch in.

Fleet Farming™ on Instagram: “Sending love to all of those who joined us in farming today on our Valentine's Swarm Ride!💚 #loveplants #loveafarmer #urbanfarming…”

To date, Fleet Farms says it has converted 11 Orlando-area lawns into gardens and harvested 1,650 pounds of produce. Not only that, they've so far pedaled 3,078 miles and saved 3,300 pounds of C02.

Farmers use bikes to pedal from home plot to home plot to harvest the produce. What's grown at the yard gardens are then sold at local farmers markets and restaurants within a five-mile radius.

Fleet Farming™ on Instagram: “Come ooooon out! We are at the @audubonmarket until 9pm with some fresh local salad greens, edible flowers, herbs, and luffa!!! ❤🌿🌕”

Another benefit of using bikes is that they slash the amount of fossil fuels usually needed for conventional food production and transportation. The nonprofit points out that conventional produce travels an average of 1,500 miles from farm to table.

Lawns are water-intensive gas-guzzlers and are regularly condemned for being wasteful and purely ornamental, especially in states most affected by climate change such as drought-ridden California. Florida, with its ominous rising sea levels, can only benefit by making sustainable improvements to its resource-heavy grass carpets as well.

"We help save gas: Americans use about 800 million gallons of gas a year mowing their lawns. We think the 10.7 million gallons dumped in the Exxon Valdez Spill was bad—but 17 million are spilled just filling lawn mowers!,” Fleet Farms co-founder and advisor Heather Grove told Future Perfect. “Lawns are also the largest irrigated crop in the U.S., almost double corn." And that's not to mention that many laws receive a regular dosing of harmful pesticides and fertilizers.

The idea behind Fleet Farming started in December 2013, when John Rife, the owner of East End Market, pitched the idea at an IDEAS For Us meeting in Orlando that encourages community members to come up with solutions for global problems. Over the next few months, Rife and other IDEAS For Us members streamlined the concept and in February 2014, a pilot program converted five lawns to farmlettes. Since its launch, the program has received a number of grants from the Healthy Central Florida Foundation, 1% For the Planet and the Clif Bar Family Foundation.

Orlando homeowner Gary Henderson told NPR that thanks to Fleet Farms, his front yard has been transformed into a farmlette with rows of tomatoes, sweet lettuce, carrots and arugula.

"I just think that the whole idea of lawns, especially in a place like Florida, is absurd," he said.

So many residents in the Orlando area have signed up for the Fleet Farms program that 300 lawns are on the waiting list.

Fleet Farms hopes to have at least eight branches with a total of 200 farmlettes throughout Central Florida neighborhoods by 2020.

Learn more about the program in this video: