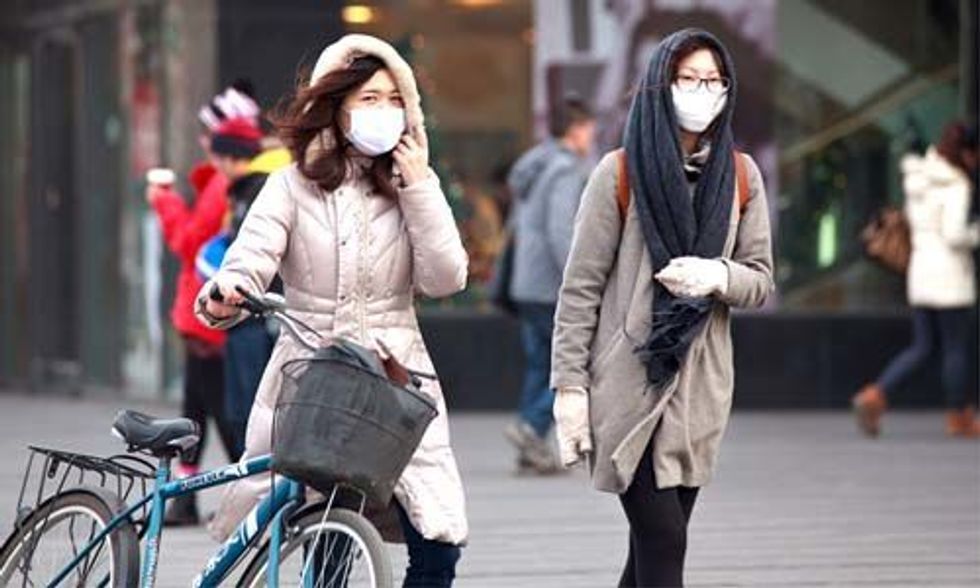 Using Google maps and new data on China's air pollution, Berkeley researchers created a real-time map of the country's appalling air quality. The map is based on findings that the scientists published last month in the journal PLoS One. Using hourly air pollution data from more than 1,500 sites, researchers concluded that air pollution is responsible for the deaths of an estimated 1.6 million people in China every year, or about 4,400 people a day. That's roughly 17 percent of all deaths, or put another way, nearly 1 in 5 deaths can be attributed to the country's toxic air pollution.

A near real-time map developed by Berkeley researchers exposes how widespread China's air pollution problem is.

"Earlier studies put China's annual air pollution death toll at one to two million, but this is the first to use newly released Chinese air monitoring figures," says South China Morning Post. The authors of the study are members of Berkeley Earth, an independent nonprofit devoted to "expanding scientific investigations, educating and communicating about climate change, and evaluating mitigation efforts in developing and developed economies."

Though pollution in China's northeast corridor running from Beijing to Shanghai is "particularly intense," the problem is widespread. "Consistent with prior findings, the greatest pollution occurs in the east, but significant levels are widespread across northern and central China and are not limited to major cities or geologic basins," said researchers. They found that during a four month period from April to August 2014, 92 percent of the population experienced more than 120 hours of "unhealthy air" based on the standards of the U.S. Environmental Protection Agency. And 38 percent experienced long-term average concentrations that were unhealthy.

“[The] map provides near real-time information on particulate matter air pollution less than 2.5 microns in diameter (PM2.5),” researchers said. PM2.5 is microscopic particulate matter that is small enough to "lodge deep inside a person's lungs and cause health problems in the long term," says South China Morning Post. “Under typical conditions, PM2.5 is the most damaging form of air pollution likely to be present, contributing to heart disease, stroke, lung cancer, respiratory infections and other diseases,” say the researchers.

Today, the map shows the areas around Shanghai, Suzhou, Hangzhou, Nantong, Nanjing, Yichang, Luzhou, Qíngdao and Laiwu as having "unhealthy" air quality. Large portions of the map fall under the category of "unhealthy for sensitive groups" and the vast majority of the mapped area falls under the "moderate" health category. Only a very few small areas fall under the category of "good." The most unsafe air quality index (180.9) can be found near the city of Yichang, a major economic hub for the region. Its PM2.5 air pollution concentration is 113.4.

To put China's air pollution problem in perspective, look at Madera, California. The American Lung Association lists Madera's air pollution as the worst in the country. And yet, "99.9 percent of the eastern half of China has a higher annual average for small particle haze than Madera," said the study's lead author, Dr Robert Rohde. "In other words, nearly everyone in China experiences air that is worse for particulates than the worst air in the U.S."

Earlier this year, a documentary exposing China's abysmal air quality went viral within days of its release. The film was hailed by some government officials, but was ultimately banned by the state.