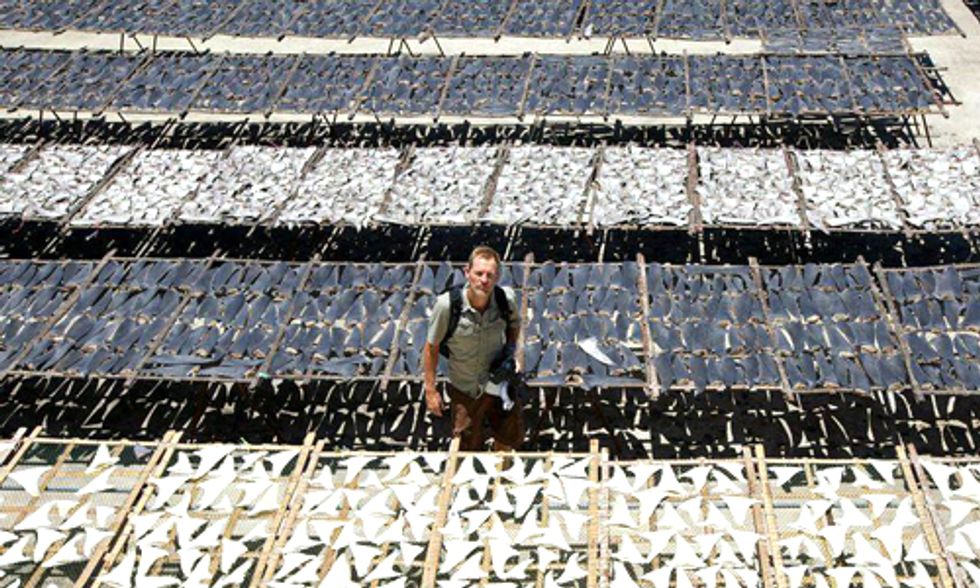 Sundance Film Festival in Park City, Utah is one of the largest independent film festivals in the world, attracting some 50,000 attendees. This year's festival, its 31st anniversary, runs from Jan. 22 to Feb. 1. Robert Redford, founder of Sundance and a longtime environmental activist, sat down with Democracy Now!'s Amy Goodman yesterday to discuss this year's festival and pressing environmental issues, including the Keystone XL pipeline. The festival always has a solid showing of environmental films and this year is no different.

One of the standouts premiering at the festival is Racing Extinction. There have been five mass extinctions in the history of our planet and we may be in the midst of a sixth. We could lose up to half the world's species and humans are to blame.

Academy award-winning director, Louie Psihoyos, who also directed The Cove, joins forces with activists, scientists, nature photographers and inventors to give viewers a behind-the-scenes look at black markets where endangered species are sold. With hidden cameras on, these activists uncover highly endangered species being sold at markets all over Asia. Psihoyos says, "the more endangered it is, the more you have to go to the backrooms. Wildlife trade is second only to the drug trade." The film goes beyond the black market trade to highlight humans' devastating impact on other species with greenhouse gas emissions.

Racing Extinction, is produced by Psihoyos's Ocean Preservation Society, who together with the United Nations, Obscura Digital, producer Fisher Stevens and musical score composer J. Ralph created illUmiNations. During this 11-minute event, images and statistics of the extinction crisis in our midst were displayed at the United Nations headquarters in New York City in September—the day before the People’s Climate March and two days before the UN Climate Summit.

Jane Goodall's voice broadcasted at the event, imploring the world: "In 200 years, people will look back on this particular period and say to themselves how did those people at that time just allow all those amazing creatures to vanish. But it would be very little use in me or anybody else exerting all this energy to save these wild places if people are not being educated into be better stewards than we've been. If we all lose hope, there is no hope. Without hope, people fall into apathy. There's still a lot left that's worth fighting for."

That's the take away message from this film. We can do something about this. Sundance says, "With stakes as high as the survival of life on the planet, Racing Extinction dispenses with apathy or fatalism to emerge as an urgent, affirming call to action to stem the tide before it's too late." Psihoyos says, "When you're talking about losing all of nature, it's not a spectator sport anymore. Everybody has to become active somehow."

Invoking a Chinese proverb, one activist says, "Better to light a candle than curse the darkness. There's so many people who sit back and say we're screwed, but you know what, with that one candle maybe someone else with a candle will find you, and I think that's where movements are started."

Is Kombucha Tea Really Good for You?