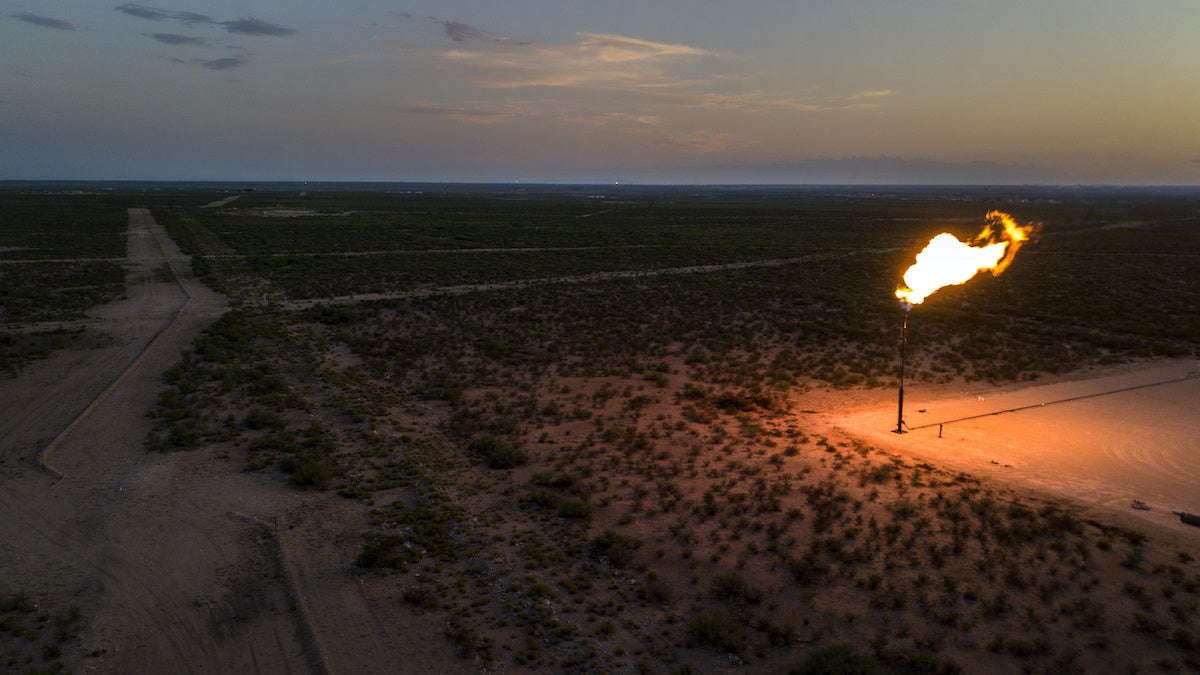 The largest oil and gas producing area in the U.S. is emitting more than twice as much methane as previously believed.

The calculations came in a study of the Permian Basin published in Science Advances Wednesday and undertaken by scientists at Harvard University and the Environmental Defense Fund (EDF). The findings cast doubt on the argument that natural gas is a cleaner energy source than coal when it comes to fueling the climate crisis.

“Our study found that the quantity of methane emitted in the Permian Basin [is] the highest ever measured from any U.S. oil and gas basin. This is a really big deal from a climate standpoint,” lead authors Harvard atmospheric scientist Yuzhong Zhang and EDF scientist Ritesh Gautam said in an email to Bloomberg Wednesday.

New satellite study: "There's so much methane escaping from Permian oil and gas operations that it nearly triples the near-term climate impact of burning the gas they're producing." Good news is there are many ways to reduce these emissions https://t.co/pY33MPC0wp pic.twitter.com/nU4AV1CIeJ

The Permian Basin, which straddles West Texas and New Mexico, produces more than a third of the country’s oil and 10 percent of its natural gas, according to CBS News. The researchers used 200,000 individual readings from the European Space Agency’s TROPOMI satellite instrument to determine the field was leaking 3.7 percent of the methane it produces, EDF reported. That’s more than two times the U.S. Environmental Protection Agency (EPA) estimate, according to InsideClimate News. It’s also enough wasted gas to power 7 million Texas homes and as much greenhouse gas pollution as the carbon dioxide emissions of all U.S. homes, the study found.

What’s more, it nearly triples the climate impact of the natural gas produced in the region over the last 20 years, according to EDF, challenging the argument that natural gas can be a cleaner bridge fuel in the transition from coal to renewable energy.

“The most up-to-date thinking is that for comparing coal and natural gas to generate electricity, gas is worse than coal if the methane emission rate is greater than 2.7%,” Cornell University methane expert Dr. Robert Howarth, who was not involved in the study, told CBS News. At 3.7 percent, the Permian Basin leakage rate definitely fits the bill.

Methane is so dangerous for the climate because it is around 28 times more powerful than carbon dioxide at warming the planet over 100 years and more than 80 times more powerful over 20 years, according to National Geographic. Because it only stays in the atmosphere for 12 years, however, reducing its emissions can have a more immediate impact on fighting global warming, InsideClimate News pointed out.

The increased emissions are partly linked to the rise of fracking, which, along with horizontal drilling, has driven the increase in U.S. oil and gas production since 2005, according to CBS News.

“After staying level for the first decade of the 21st century, methane emissions have been rising quickly over the past decade,” Howarth told CBS. “My research indicates that shale gas development in the U.S. is responsible for at least one-third of the total increase in these emissions globally.”

The study’s authors had several recommendations for how oil and gas producers could reduce methane emissions, such as improving design, management, regulation and infrastructure.

However, the Trump administration is making it easier for the industry to sidestep improvements.

“Trump’s EPA has proposed to substantially weaken or even eliminate regulations, adopted during the Obama administration, to control methane emissions from oil and gas facilities,” Romany Webb, a senior fellow at the Sabin Center for Climate Change Law at Columbia Law School, told CBS.

There is also the question of how the fall in oil demand prompted by the coronavirus pandemic will impact methane emissions. The data in the study was collected over 11 months in 2018 and 2019, when production and demand was normal.

“There is going to be a lot less wells being drilled, probably less gas being flared, even wells [that] will [probably] be shut in,” study coauthor and EDF scientist David Lyon told InsideClimate News. “If that is done properly, then I think you will have less emissions. At the same time, I wouldn’t be surprised if a lot of operators cut back on their environmental staff and they do [fewer] leak inspections and other activities that would reduce emissions. They may have less ability to respond to malfunctions and things that cause emissions.”