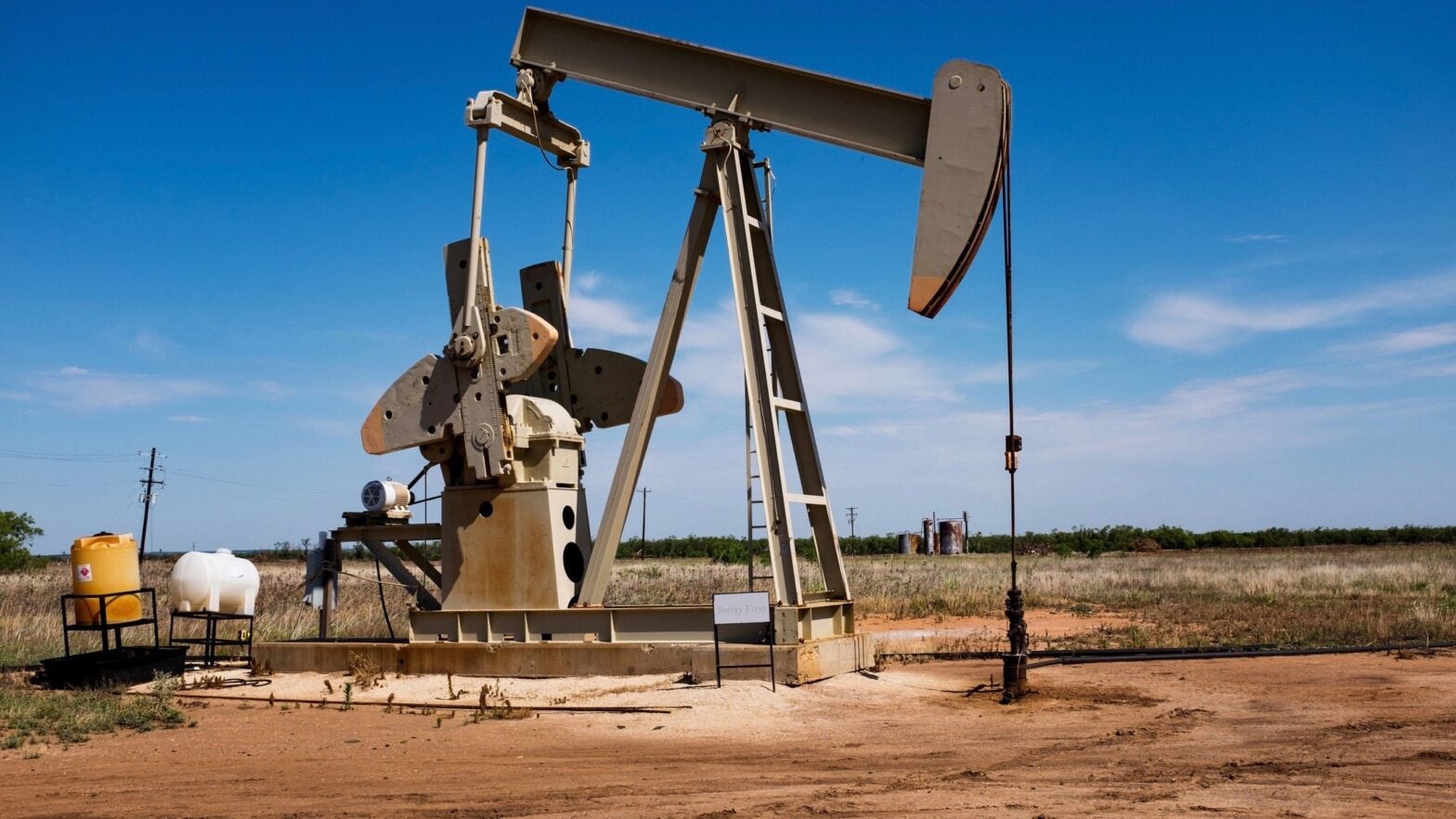 Crude oil extraction pump pulling crude oil up to the surface and pushing it into pipelines in the Permian Basin in West Texas on May 27, 2018. ©Studio One-One / Moment / Getty Images

ExxonMobil is a company capable of contradictions. It has been lobbying against government efforts to address climate change while running ads touting its own efforts to do so.

And while the oil giant has been responsible for massive methane releases, Exxon has now proposed a new regulatory framework for cutting emissions of this powerful greenhouse gas that it hopes regulators and industry will adopt. As Exxon put it, the goal is to achieve “cost-effective and reasonable methane-emission regulations.”

So, why is Exxon asking to be regulated?

The answer may be simply that Exxon is very good at public relations. As industry publication Natural Gas Intelligence reported, this announcement “comes as energy operators face increasing pressure from lenders and shareholders to engage in decarbonization by following environmental, social, and governance standards.”

ExxonMobil is proposing new rules to cut methane emissions. We think it makes sense for industries to work together to reduce methane emissions. Learn how we’re using what we know to help the oil and gas industry to cut emissions. https://t.co/6IUqUHD1yD pic.twitter.com/bsjRL1iawO

Exxon’s proposed regulations have three main objectives: finding and detecting leaks, minimizing the direct venting of methane as part of oil and gas operations, and record keeping and reporting.

Casey Norton, Exxon’s Corporate Media Relations Manager, explained to DeSmog that Exxon’s proposal was not expected to be adopted as-is by regulatory agencies. “This is a starting point for conversations with policy makers and other regulators,” he said. “For example, New Mexico, Argentina, the EU, who are all considering new regulations for methane emissions.”

Under President Trump, the federal government last year rolled back Obama-era rules for oil and gas companies to report methane emissions and for restricting these emissions during drilling on public lands.

This isn’t Exxon’s first foray into voluntary regulations of methane. The corporation’s natural gas subsidiary XTO started a voluntary methane emissions program in 2017. In June 2018, XTO noted that the voluntary program, which was mostly about replacing leaking valves, had reduced methane emissions by 7,200 metric tons since 2016.

However, leaking valves are not the biggest source of methane emissions. In February 2018, four months before XTO was touting the success of its methane reduction program, the company experienced the second largest methane leak in U.S. history. A gas well it operated in Ohio suffered a blowout, releasing huge amounts of the heat-trapping gas.

Did XTO’s voluntary program accurately report this? As The New York Times reported, “XTO Energy said it could not immediately determine how much gas had leaked.”

But a group of scientists using satellite data eventually did pin down the amount released — 120 metric tons an hour for 20 days. That adds up to roughly 50,000 metric tons more released than the 7,200 metric tons in reductions XTO was claiming months later. That one leak was estimated to be more than the methane emissions of the total oil and gas industry of countries like Norway.

As DeSmog reported, XTO is also flaring the most natural gas of any company in the Permian oil field (natural gas is almost 90 percent methane). While flaring isn’t as bad for the climate as directly venting the methane into the atmosphere, it is increasing the levels of carbon dioxide and toxic air pollutants and is another problem the industry is saying it will address even as the practice continues on a large scale.

And now the same company is recommending that the rest of the industry and regulators adopt their approach to regulating methane emissions.

“It is not target-based, it is not volume-based,” Exxon’s Norton said. “Again, it’s starting a conversation, saying these are things that you can look at.”

Robert Howarth, a biogeochemist at Cornell University whose work focuses on methane emmissions in the oil and gas industry, drew attention to areas of Exxon’s framework he thought were lacking. For starters, he pointed out that the proposed framework does not mention emissions from “imperfect well casings and from abandoned wells,” which Howarth says “can be significant.” He also noted that the proposal does not describe “a methodology for characterizing any of these emissions; there are techniques for doing so, but there is not much demonstrated use of these techniques by industry.”

Finally — and this is the real danger with any sort of industry self-regulation — Howarth said there must be some type of independent oversight to assess actual emissions instead of relying on the industry to self-report. XTO’s well blowout in Ohio is an excellent example of why this third-party verification is critical. Without oversight, the “system is ripe for abuse,” according to Howarth.

Sharon Wilson of environmental advocacy group Earthworks documents the oil and gas industry’s current widespread practices of flaring and venting methane. Sharing her concerns about Exxon’s methane emissions proposal, she told DeSmog,”Exxon’s recent announcement is too little too late when it comes to the climate crisis they’ve help cause and are still making worse. Reducing methane emissions by any percentage is not enough when Exxon continues to expand sources of the same climate pollution.”

Wilson called for the company to support federal and state rules to cut methane.

The Trump administration has staffed regulatory agencies with former industry executives and lobbyists who have been quite successful at rolling back environmental, health, and safety rules.

“EPA’s proposal delivers on President Trump’s executive order and removes unnecessary and duplicative regulatory burdens from the oil and gas industry,” Wheeler said. “The Trump administration recognizes that methane is valuable, and the industry has an incentive to minimize leaks and maximize its use.”

The problem with this free-market assumption is that Wheeler is wrong about the industry’s financial incentive to limit methane emissions.

The unreal natural gas prices in the #Permian get even more unreal:

Nat gas at the Waha hub (near El Paso) have hovered as low as -$6 per mBtue over the last couple of days (and yes, that's a **negative** price with producers paying consumers). #OOTT pic.twitter.com/3xdqkMSgxH

There is too much natural gas, aka methane, flooding world energy markets right now. Current prices to buy it are lower than the costs to produce it. The methane currently produced in Texas’ Permian Basin spent a good portion of last year at negative prices. There is no financial incentive for producers in the Permian to voluntarily cut methane emissions in the current market environment.

That is why Permian producers are flaring (openly burning) it at record levels as well as directly releasing (venting) methane into the rapidly warming atmosphere. So much for letting the free market address the issue.

Even the Remaining Regulations Are Controlled by Industry

While the Trump administration has rolled back many regulations for the oil and gas industry, the regulatory system in the U.S. was already designed to protect industry profits — not the public or environment. When the federal government creates regulations, the process can be heavily influenced by industry lobbyists, and if they don’t agree with the regulations, there are many ways they can get them revised to favor their companies.

While Exxon did publicly say in 2018 that it didn’t support repealing the existing methane regulations, the company also wrote to the EPA voicing support for certain aspects of the American Petroleum Institute’s (API) comments on the issue, and the API approved removing the regulations. In that letter Exxon used the same language it is now using with its propsed regulations, saying any rules need to be “cost-effective” and “reasonable.” But if the regulations are cost-effective, will they actually be effective in reducing methane emissions in a meaningful way?

Excerpt from Exxon letter to EPA about methane regulations. ExxonMobil

The Wall Street Journal recently highlighted the influence that the oil and gas industry and its major U.S. trade group the American Petroleum Institute can have over regulations. After the deadly 2010 Deepwater Horizon explosion and oil spill in the Gulf of Mexico, the federal government put into place new safeguards known as the “well control rule” in order to prevent another disaster during deepwater offshore drilling.

In 2019, the Trump administration revised the rule, weakening it, even though, as the Journal reported, federal regulatory staff did not agree “that an industry-crafted protocol for managing well pressure was sufficient in all situations, the records show.” The staff was ignored. (And the move is undergoing a legal challenge.)

This type of industry control over the regulatory process was also brought to light after two Boeing 737 MAX planes crashed and killed 346 people. Boeing had fought to make sure that pilots weren’t required to undergo expensive and lengthy training to navigate the new plane.

Reuters reported on internal communications at Boeing which revealed the airplane maker simply would not let simulator training be required by regulators:

“I want to stress the importance of holding firm that there will not be any type of simulator training required to transition from NG to MAX,” Boeing’s 737 chief technical pilot said in a March 2017 email.

“Boeing will not allow that to happen. We’ll go face to face with any regulator who tries to make that a requirement.”

Boeing got its way. And 346 people died.

Nearly a year after a second crash of a Boeing 737 MAX that led to its grounding, the full extent of the company’s complicity & negligence, abetted by regulators, is revealed by a damning report from the House Committee on Transportation and Infrastructure https://t.co/YhBk5CwnHK

For the past six years, I have reported on the failed regulatory process governing the moving of dangerous crude oil by rail (and even wrote a book about it). The only meaningful safety regulation that resulted from a multi-year process was requiring oil trains to have modern electronically controlled pneumatic brakes.

As I reported, shortly after this regulation was enacted, Matthew Rose, CEO of the largest oil-by-rail company BNSF, told an industry conference that “the only thing we don’t like about [the new regulation] is the electronic braking” and “this rule will have to be changed in the future.” As per the wishes of Matthew Rose, that rule was repealed despite the substantial evidence clearly showing this modern braking system greatly increases train safety.

A recent op-ed from an editor at the trade publication Railway Age referred to these oil trains as a “clear and present danger.” Nevertheless, these trains hauling volatile oil through North American communities are still operating with braking systems engineered in the late 1800s.

Exxon’s methane proposal states that any regulations should be based on “sound science.” This statement is coming from a company whose scientists accurately predicted the impacts of burning fossil fuels on the climate decades ago and yet has spent the time since then misleading the public about that science.

The current regulatory system in America does not protect the public interest. Letting Exxon take the lead in the place of regulators doesn’t seem like it’s going to help.

Megan Milliken Biven is a former federal analyst for the U.S. Bureau of Ocean Energy Management, the federal agency that regulates the oil industry’s offshore activity. Milliken Biven explained to DeSmog what she saw as the root cause of the regulatory process’s failure.