‘Murder Hornets’ Spotted in U.S. for the First Time 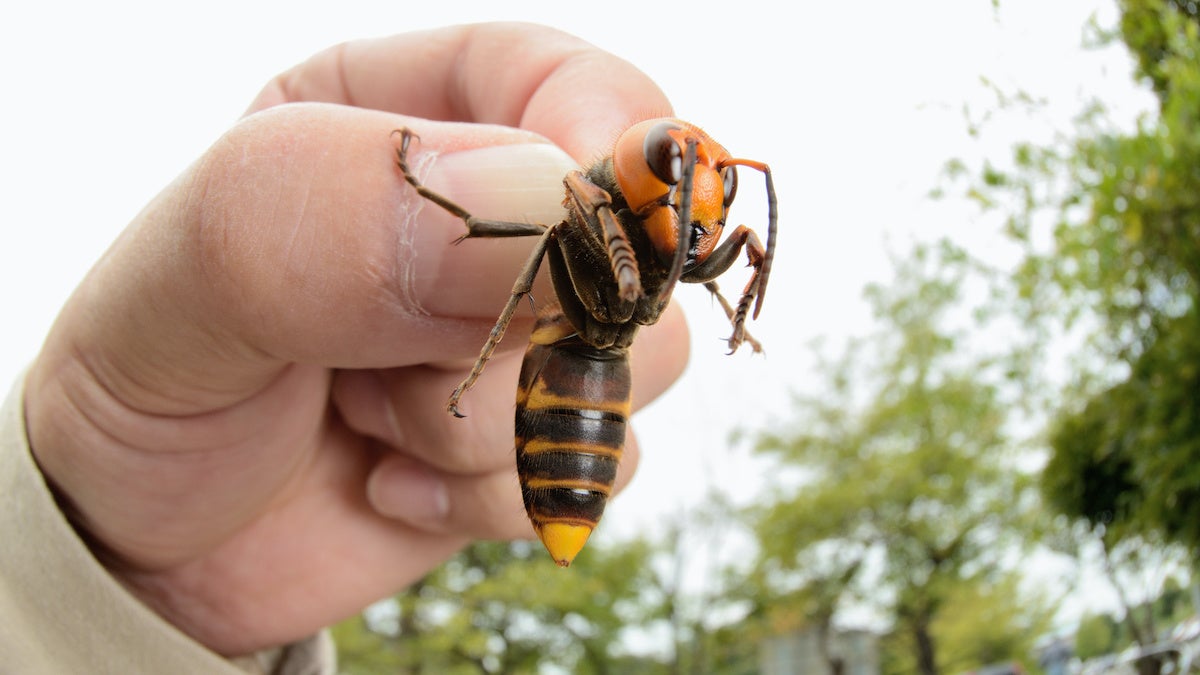 The Asian giant hornet, the world's largest, was spotted for the first time in the U.S. in December. Photography by Shin.T / Moment / Getty Images Plus

Invasive “murder hornets” have been spotted in the U.S. for the first time, prompting concerns for the nation’s honeybees and the trajectory of a year that has already brought locust invasions and a global pandemic.

Four sightings of the world’s largest hornets — officially called the Asian giant hornet (Vespa mandarinia) — were reported and verified in Washington State in December 2019, according to the Washington State Department of Agriculture (WSDA). But “murder hornet” began trending after the publication Saturday of a New York Times piece about Washington’s efforts to find and eradicate the insects before they take hold, as NBC News reported.

“Murder hornets. Sure thing, 2020,” actor and comedian Patton Oswalt tweeted. “Give us everything. Hypno-frogs. Fecal blizzards. Toilet tsunamis. A CATS sequel. We can take it.”

Murder hornets. Sure thing, 2020. Give us everything. Hypno-frogs. Fecal blizzards. Toilet tsunamis. A CATS sequel. We can take it. https://t.co/DSDpgKhKzQ

But for honeybees, the Asian giant hornet is no joke. The hornets enter a “slaughter phase” where they decapitate bees, WSDA said. They destroy an entire hive within hours and then claim it as their own, feeding the brood to their young.

Washington beekeeper Ted McFall told The New York Times of driving home in November to find a pile of decapitated bee carcasses on the ground.

“I couldn’t wrap my head around what could have done that,” McFall told The New York Times. He later came to suspect murder hornets, though this has not been confirmed.

There have also been sightings of the hornet across the border in British Columbia, but at least one of the Canadian hives was proven to be unconnected to one of the Washington hornets, meaning the insect was likely introduced to the region at least twice.

While the hornets do not typically attack humans or pets unless threatened, their stings are extremely painful and can be deadly. They earned the nickname “murder hornet” because their group attacks can expose the victim to as much venom as a snake bite, Kyoto Sangyo University researcher Jun-ichi Takahash told The New York Times. In Japan, they kill as many as 50 people a year.

“It was like having red-hot thumbtacks being driven into my flesh,” Conrad Bérubé, a beekeeper who was stung while exterminating a hive on Vancouver Island, told The New York Times of the experience.

The hornets are 1.5 to two inches long and have a yellow or orange head with bulging eyes and a black and yellow striped abdomen, according to WSDA.

“They’re like something out of a monster cartoon with this huge yellow-orange face,” Washington State University’s (WSU) Department of Entomology bee breeder Susan Cobey said in a university press release.

#ICYMI Here is our image comparing #AsianGiantHornet to other flying insects. No, its name is not the #murderhornet pic.twitter.com/cwIgIPGC1t

WSU is working with WSDA, beekeepers and citizen scientists to locate and contain the hornets now that they are beginning to become active again. Queens usually emerge from hibernation in April, but the species is most destructive in the late summer and early fall.

If scientists can’t stop the hornets’ spread, it is uncertain what it would mean for the nation’s bees. In Japan, they are a serious problem for European honeybees, who have no natural defenses. A similar hornet introduction to Europe saw beehives decline 30 percent and their honey tally fall by as much as two-thirds, WSDA eradication coordinator Rian Wojah told TIME.

WSU entomologist Todd Murray said he was worried about what the hornets’ spread would mean for a state that relies on bees to pollinate crops like apples and cherries. He warned invasive species could change ecosystems permanently.

“Just like that, it’s forever different,” Murray said. “We need to teach people how to recognize and identify this hornet while populations are small, so that we can eradicate it while we still have a chance.”

If you see an Asian giant hornet and live in Washington state, you can help by reporting it to the WSDA Pest Program at 1-800-443-6684, pestprogram@agr.wa.gov or online at agr.wa.gov/hornets. If you live outside Washington and think you spot one of the hornets, WSDA advises you contact your state or province’s department of agriculture.