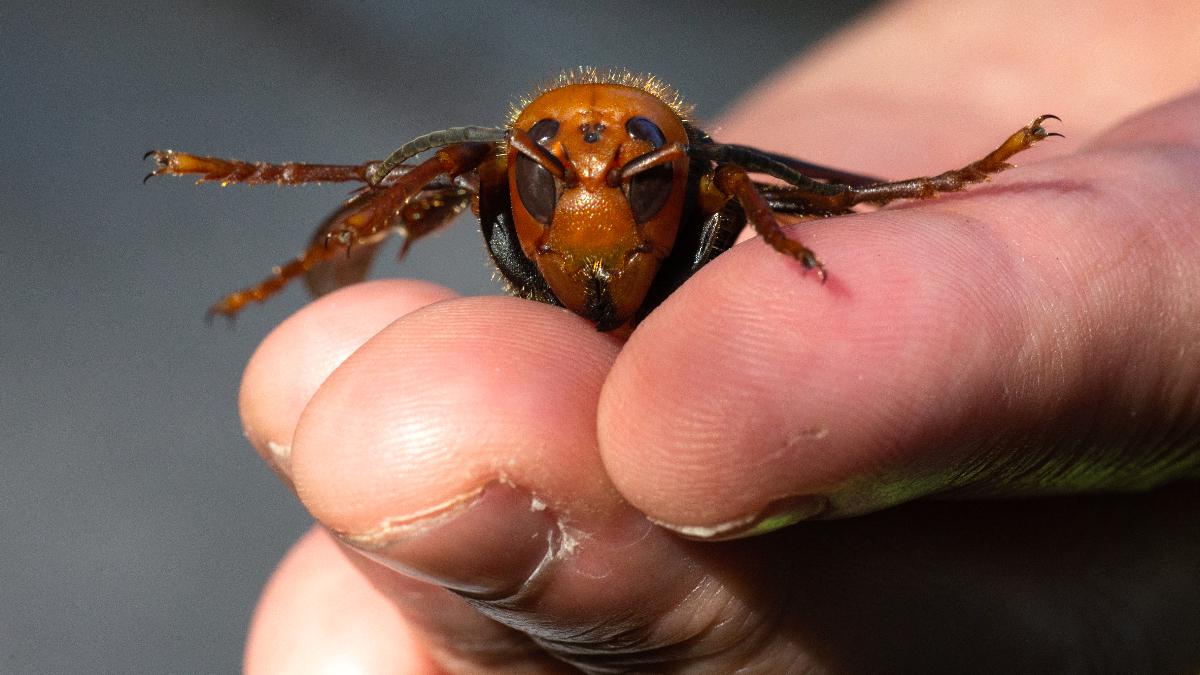 A murder hornet is shown by a pest biologist from the Washington State Department of Agriculture on July 29, 2020 in Bellingham, Washington. Karen Ducey / Getty Images

The so-called murder hornet, known for its “excruciating” sting and ability to wipe out an entire bee-colony in just a few hours, is coming out of hibernation and scientists need help in eradicating them, VICE reported.

Scientists in the U.S. and Canada announced a “war” against the murder hornet as it begins to establish its nests in spring, AP reported. Over the past two years, the world’s largest hornets have been spotted in British Columbia and Washington state.

“This is not a species we want to tolerate here in the United States,” Sven-Erik Spichiger of the Washington state Department of Agriculture said, according to AP. “We may not get them all, but we will get as many as we can.”

Scientists are encouraging citizens to begin setting up an orange juice or a brown sugar-based trap in July, The Washington State Department of Agriculture wrote in a statement. Residents in Whatcom, Skagit, San Juan, Island, Jefferson, and Clallam counties are especially encouraged to participate.

While the department and several agencies, including Washington State University, are planning their own eradication efforts, citizen reportings are necessary to cover as much ground as possible. Last year, half of the confirmed reports of the murder hornet in Washington and all confirmed reports in British Columbia were from members of the public, the department wrote.

While the murder hornet, more commonly known as the Asian giant hornet, is rarely deadly, its venom can damage human tissue if stung, CNN reported. “It’s an absolutely serious danger to our health and well-being,” Paul van Westendorp of the British Columbia Ministry of Agriculture, Food and Fisheries told AP. “These are intimidating insects.”

The hornets kill at most a few dozen people a year in Asian countries, according to AP. At the same time, hornets, wasps and bees found in the U.S. kill an average of 62 people a year, AP reported.

But the giant insect is not after humans, posing instead a more serious threat to bee populations. Just a small group of Asian giant hornets, for example, can destroy an entire honey bee hive in a few hours, AP reported.

“During one recorded slaughter examined by researchers, each hornet killed one bee every 14 seconds, using powerful mandibles to decapitate its prey,” The New York Times reported.

In a state that relies on honey bees to pollinate its multibillion-dollar agricultural industry, beekeepers and entomologists in Washington worry for the future if the murder hornet is able to establish itself in North America.

“Most people are scared to get stung by them,” Ruthie Danielsen, a beekeeper in Birch Bay, Washington told The New York Times. “We’re scared that they are going to totally destroy our hives.”

Additional efforts to eradicate the giant insect include conducting genome sequencing to find out how the Asian giant hornet first arrived in North America and if there are any subpopulations, VICE reported. “Knowing the origin is important to control efforts because it may offer a better understanding of nesting biology and potential range, which varies in native populations,” Anna Childers, a researcher at the U.S. Department of Agriculture, told VICE.

Scientists and department workers plan to catch the live hornet, tag it and track it back to its nest to then be destroyed, VICE reported. “So hanging a trap actually protects you. It lets you know that there’s something in the area and contains it in such a way that you can then call [authorities in B.C. or Washington] and we can do something about it.” Spichiger told VICE.

Washington residents can report all sightings of Asian giant hornets to WSDA at agr.wa.gov/hornets, via email at hornets@agr.wa.gov, or by calling 1-800-443-6684.