New Study Uncovers Why These Snakes Wiggle When They Fly The south Asian paradise tree snake can launch itself into the air and glide from one tree branch to another. Thai National Parks, CC by 2.0

Did you know that some snakes can fly?

The south Asian paradise tree snake (Chrysopelea paradisi) can launch itself into the air and glide from one tree branch to another. And when it does, it moves its body in waves in something known as aerial undulation. Scientists have long known how the snakes moved. But they didn’t know why. Until now.

“In all these years, I think I’ve seen close to a thousand glides,” Virginia Tech professor Jake Socha, who has studied snake flight for more than 20 years, said in a university press release. “It’s still amazing to see every time. Seeing it in person, there’s something a little different about it. It’s shocking still. What exactly is this animal doing? Being able to answer the questions I’ve had since I was a graduate student, many, many years later, is incredibly satisfying.”

You know what your day needs? Flying snakes.https://t.co/RJ3ZWb3vlK

What Socha wanted to find out was whether the snakes’ aerial undulation served any purpose.

“All snakes undulate when they move. And so on the ground, on a tree, in the water, they are creating these side-to-side waves,” Socha told NPR. “It’s not crazy to think that when the snake jumps into the air, the snake goes, ‘Hey, I’m a snake. I undulate. That’s what I should be doing.'”

To answer the question, Socha and his team created the first continuous, accurate 3D mathematical model of paradise tree snakes mid-glide, Virginia Tech reported. The model allowed them for the first time to see what would happen if the snakes didn’t wiggle when they flew.

The results, published in Nature Physics Monday, showed that the undulation really does serve a purpose—it keeps the snakes stable as they fly.

“When you turned the undulation off in the model, you see that you get really bad gliding performance,” Socha told USA TODAY. “In fact, it tumbles out of the sky much more readily than when you have undulation.”

In order to build their model, the researchers first had to capture the snakes in motion. To do this, they borrowed space and some techniques from the world of theater and film.

During May and June of 2015, they filmed the snakes in a black-box theater at Virginia Tech called the Cube, which also contains motion-capture cameras. 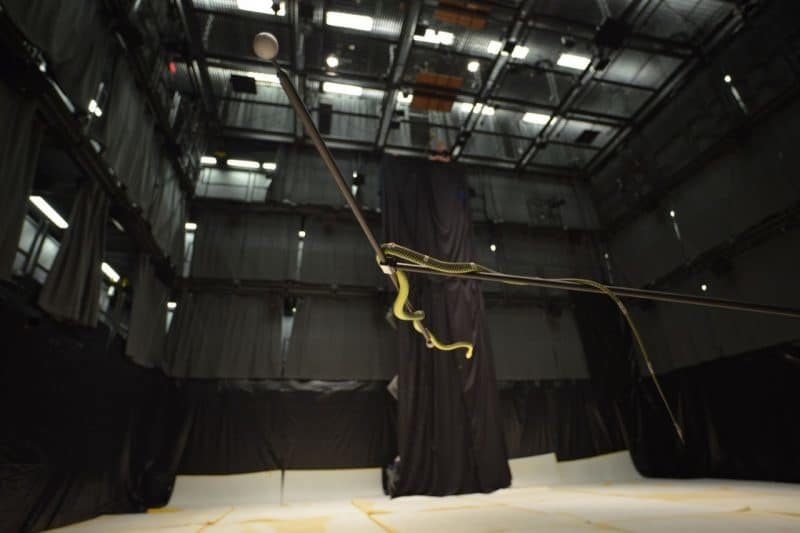 The Cube is home to a 23-camera motion capture system. Jake Socha

“I guarantee you they did not have flying snakes in mind when they designed this facility,” Socha told USA TODAY.

While filming, they placed 11 to 17 pieces of reflective tape on the snakes’ bodies, similar to the tape worn by actors doing motion capture performances in Hollywood movies, NPR explained. They measured more than 100 snake glides to create their model, according to the press release. 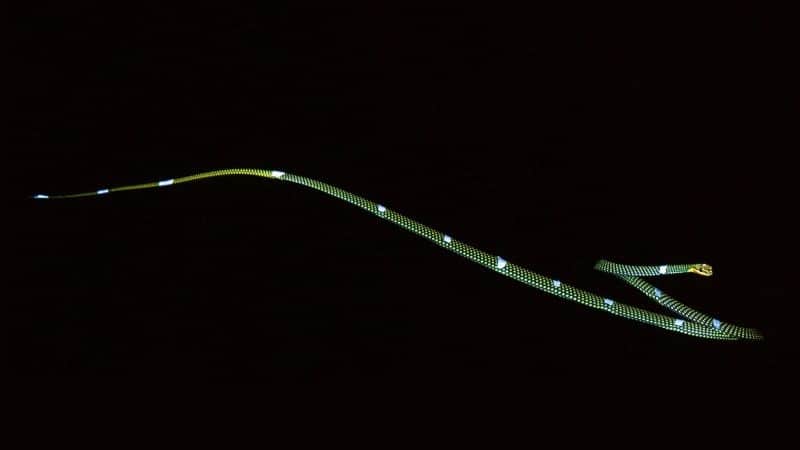 The snakes wore 11 to 17 infrared-reflective markers, which gave the team high-resolution data while still allowing the animals to move freely. Jake Socha

Filming the snakes also taught the researchers more about the mechanics of the snakes’ motion. They discovered that the snakes moved both side to side and up and down.

“What really makes this study powerful is that we were able to dramatically advance both our understanding of glide kinematics and our ability to model the system,” lead author and recent Virginia Tech doctoral graduate Isaac Yeaton explained in the press release. “Snake flight is complicated, and it’s often tricky to get the snakes to cooperate. And there are many intricacies to make the computational model accurate. But it’s satisfying to put all of the pieces together.”