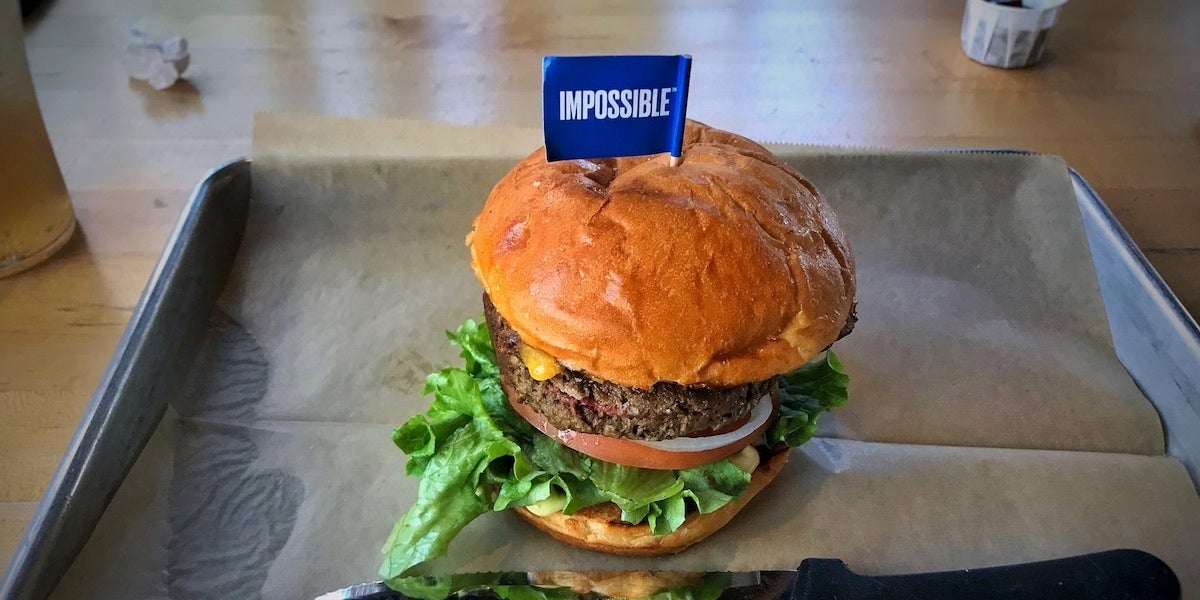 The vegan "Impossible Burger" is growing in popularity. T.Tseng / Flickr / CC BY 2.0

Update, Sept 4: The bottom of this article has been updated with the Missouri Department of Agriculture’s new guidelines and a statement from Beyond Meat.

Missouri is the first state in the country to enact a law that
criminalizes certain uses of the word “meat.”

The mandate, which came into effect on Tuesday, prohibits companies from “misrepresenting” products as meat if they are not from “harvested livestock or poultry.” The measure was approved by the legislature in May and signed by former-Gov. Eric Greitens on June 1. Violators could be fined $1,000 and face imprisonment for a year, according to
USA TODAY.

The initiative was backed by the state’s pork producers, the Missouri Farm Bureau and the Missouri Cattlemen’s Association.

“The big issue was marketing with integrity and … consumers knowing what they’re getting,” Missouri Cattlemen’s Association spokesman Mike Deering told USA TODAY. “There’s so much unknown about this.”

Additionally, the St. Louis Dispatch reported that plant-based burger company Beyond Meat just expanded its manufacturing facility in Columbia. It employs more than 200 workers in mid-Missouri and is poised to add another 250 employees.

On Monday, a coalition of organizations including the American Civil Liberties Union (ACLU) of Missouri, the
Animal Legal Defense Fund (ALDF), the Good Food Institute (GFI) and vegetarian foodmaker Tofurky filed a complaint in a Missouri federal court challenging the law.

The groups say the law is designed to protect the meat industry against the growing $5 billion plant-based “fake meat” sector, which has boomed from the public’s increasing appetite for healthier, more humane and environmentally sustainable food products.

“As more and more consumers are making the conscious choice to remove animals from their plates, Missouri is putting its thumb on the scale to unfairly benefit the meat industry and silence alternative producers,” said ALDF executive director Stephen Wells in a statement.

The groups maintain that the state’s consumer protection agency has no evidence that consumers are confused by the labels of plant-based products.

The lawsuit alleges that the new law violates constitutional principals such as free speech, discriminates against out-of-state companies, denies fair and honest competition in the marketplace, and infringes on the Due Process Clause because the vague language in the law makes it difficult for companies to know what is and is not legal.

“Americans don’t like censorship, and they don’t like the government picking winners and losers in the marketplace,” said GFI executive director Bruce Friedrich. “We’re confident that the Court will overturn this anti-competitive and unconstitutional law.”

Not all meat producers are against faux-meats. Earlier this year, Tyson Foods, one of the largest meat companies in the U.S., announced it is ramping up its investment in lab-grown animal protein in response to growing demand for meat worldwide. The company’s venture capital arm purchased a minority stake in Memphis Meats.

The meat industry is lobbying the federal government to make similar changes. In April, the National Cattlemen’s Beef Association submitted
official comments to the United States Department of Agriculture outlining key principles for the regulation of fake meat products.

“It is critical that the federal government step up to the plate and enforce fair and accurate labeling for fake meat,” Kevin Kester, president of National Cattlemen’s Beef Association, said in a
press release.

On Aug. 30, the Missouri Department of Agriculture issued a clarification of how the new “Missouri Meat Advertising Law” will be implemented, as follows:

The new guidelines will be phased in over the next four months to give companies time to update product labels and bring packages into compliance.

Beyond Meat issued a statement to EcoWatch on Aug. 31 saying the company was pleased the legislation does not disallow the descriptor “plant-based meat” and plans to continue operating under the newly released guidelines.

“We are satisfied we were able to reach an understanding with the state of Missouri that affirms our use of a ‘plant-based’ qualifier on our packaging is fair and accurate. We believe that we are building meat directly from plants, and that consumers are not only accepting of this innovation but enthusiastically embracing it,” said Ethan Brown, CEO and founder of Beyond Meat, in the statement. “Free speech, commerce that is unstifled by unnecessary government interference, and consumer choice are foundations of our country. To this end, we are pleased that the legislation did not go so far as to disallow our use of the descriptor plant-based meat, and we plan to continue operating under the newly released guidelines, selling our delicious plant-based burgers, sausages and beyond.”