If Monsanto Was a Person... 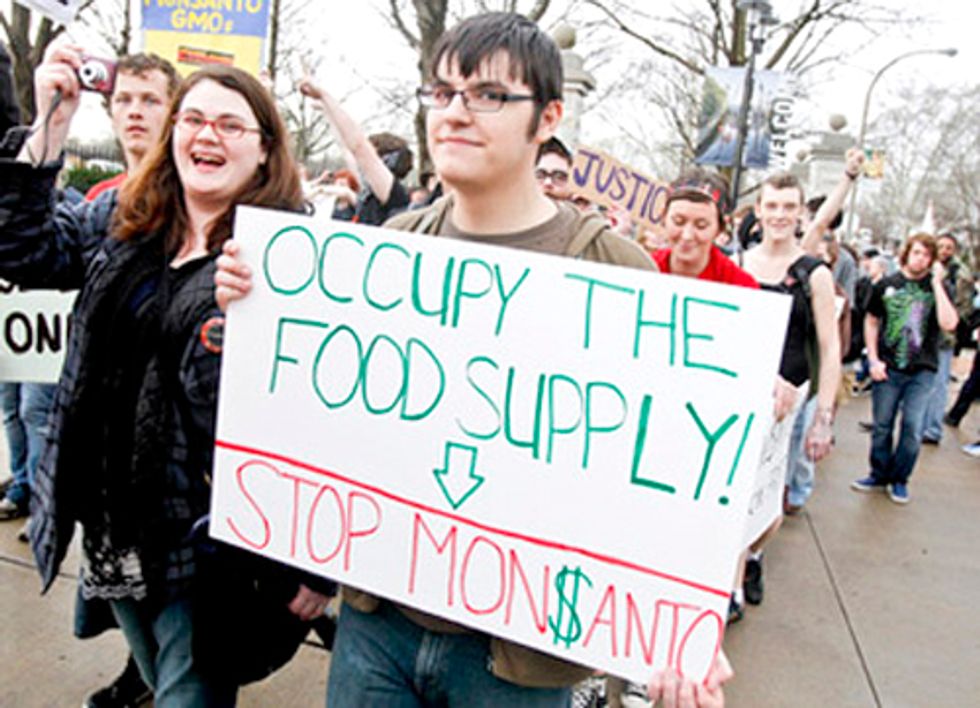 The following video is from the March 16, 2012, action that shut down a Monsanto research facility in Davis, Calif. In the video, a young boy, Ci Yin Sun Thunder, host of Small World Radio, tells Monsanto's story as if, as the Supreme Court has ruled, Monsanto was actually a person. Check out the video, then read on to learn more about the problem of giving corporations the legal rights of people and what we can do to control corporations like Monsanto.

Thanks to the Supreme Court and Citizens United, big corporations like Monsanto are allowed to spend obscene amounts to drown out our voices in elections and take over our government. They use their clout to block popular, common-sense regulations needed to protect human health and the environment. With corporate money flooding our electoral and legislative system, even minor reforms, like labels on genetically engineered food—a cause supported by more than 90 percent of the voting public—are blocked.

When it comes to elections for public office, the choice between Democrats and Republicans can be very narrow. Neither political party is going to take a stand against genetic engineering or dangerous pesticides, as long as companies like Monsanto ply candidates from both parties with campaign contributions and incessant lobbying.

But, there is one place in this shredded democracy where the one-person-one-vote ideal may still hold sway: in the electoral tools of direct democracy. The use initiatives, referendums, and recalls can launch a ballot box insurgency that begins at the local, municipal and county level, and then moves to the state level and even federal level.

A ballot box insurgency, reinforced by direct action, along with workplace, marketplace and community organizing, will enable our forces to gradually replace most of the nation's indentured politicians with new leaders and public servants who truly represent the people, not the economic royalty. Such an electoral insurgency cannot be sparked by humdrum partisan politics. It requires electoral campaigns that offer real solutions to our current life or death problems, that educate and mobilize grassroots forces, that change the balance of power away from the corporate elite, and return real power to the grassroots.

This year in California, we have a chance to win back our right to know what's in our food from Monsanto by taking the Label GMOs ballot initiative for labels on genetically modified food to the voters in the November 2012 election.

Here are a few inspiring uses of initiatives, referendums and recalls, along with more ways the 99 percent can take our democracy back from the richest 1 percent:

Amend2012.org—Have as many states as possible pass ballot resolutions calling on Congress to pass a constitutional amendment stripping corporations of constitutional rights.

FairVote.org—To be a truly fair, open and equitable democracy, we need to break the stranglehold of the two major parties—and the corporations like Monsanto that control them—and make sure that every vote counts. This can be achieved through reforms like Choice Voting, a National Popular Vote for President, Instant Runoff Voting, a Constitutional Right to Vote and Universal Voter Registration.

OccupyTogether.org—The Occupy Movement is changing—and saving—the world. Through the astonishing power of creative nonviolence, it has the magic and moxie to defeat the failing forces of corporate greed. Occupy has been actively campaigning against Monsanto, and led the Shut-Down Monsanto actions on March 16, 2012, that targeted Monsanto locations worldwide.

Fully Prosecute Corporate Crime—Human beings charged with serious crimes can get plea bargains, but they have to admit their guilt and accept the punishment. Corporations charged with serious crimes get special treatment. They get to bargain for their punishment without admitting guilt. This is how Federal Prosecutors dealt with Monsanto when it was caught bribing giving an Indonesian regulator $50,000 to drop a requirement to conduct an environmental review before authorizing the cultivation of genetically modified crops.

Stop the Privatization & Financialization of Nature—We've seen what the banks and the speculators have done with mortgages. Now companies like Monsanto, Nestle and Cargill are adding patented plants and animals, staple foods, farmland, forests and water to their casinos. Just as they drove millions from their homes, they're now leaving billions without clean water or enough to eat.