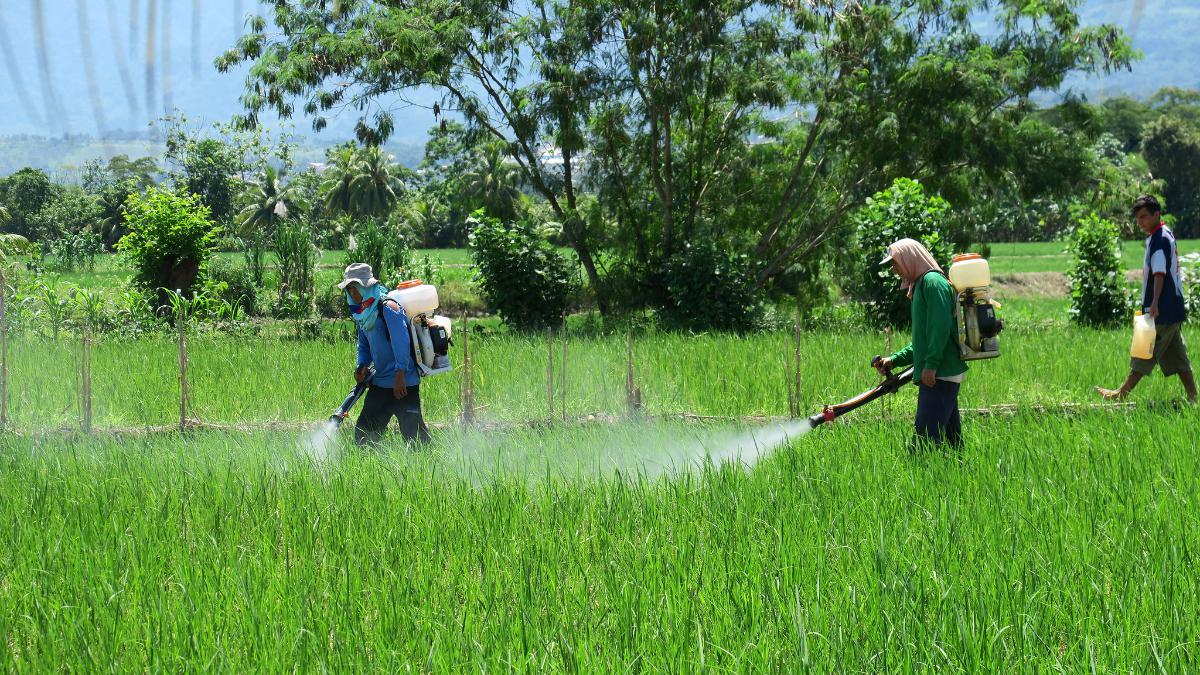 Workers spray pesticides made by BASF and Monsanto on plants in Tarapoto, Peru on May 1, 2017. Development Planning Unit University College London / CC BY 2.0

After a federal judge rejected a $2 billion class-action proposal from Bayer to avert future lawsuits alleging its popular Roundup herbicide causes cancer, the pharmaceutical and chemical giant announced Thursday that it would consider ending sales of the glyphosate-based weedkiller for residential use in the United States.

In a statement, Bayer said that it “will immediately engage with partners to discuss the future of glyphosate-based products in the U.S. residential market” in a move aimed at “mitigating future litigation risk.”

“None of these discussions will affect the availability of glyphosate-based products in markets for professional and agricultural users,” the Germany-based company added.

On Wednesday, U.S. District Court Judge Vince Chhabria in San Francisco rejected Bayer’s $2 billion plan to settle future lawsuits as “clearly unreasonable,” saying that while the proposal would “accomplish a lot for Monsanto” — the Roundup maker acquired by Bayer for nearly $63 billion in 2018 — it “would accomplish far less for… Roundup users.”

NEW: @Bayer is rethinking the future of glyphosate products after losing a $2B cancer claims settlement – yet it still won’t recall glyphosate-rich Roundup.

Earlier this month, the U.S. Court of Appeals for the 9th Circuit in San Francisco upheld a lower court ruling against Monsanto that found the chemical maker liable for the cancer afflicting users of Roundup, the world’s bestselling weedkiller. Thousands of Roundup users allege the herbicide gave them non-Hodgkin’s lymphoma, a cancer of the blood.

While Bayer claims Roundup is safe, the International Agency for Research on Cancer (IARC) said in 2015 that glyphosate “is probably carcinogenic to humans.”

In 2018, a San Francisco Superior Court jury found Monsanto liable for damages suffered by a groundskeeper and cancer patient who alleged his ailment was directly caused by exposure to glyphosate-based herbicides including Roundup, opening the floodgate for similar lawsuits across the nation. Juries in three separate cases have found that Monsanto covered up evidence of glyphosate’s health risks for decades. Bayer subsequently agreed to allot $9.6 billion toward resolving the 125,000 claims against the company.

In addition to being labeled a probable carcinogen by IARC, glyphosate has also been found to contaminate soil, water, and air. It has also been linked to low birth weights.

Health and environmental campaigners were encouraged by Bayer’s Thursday announcement.

“Removing glyphosate from residential use would be a step in the right direction, as most of the cases now pending settlement involved serious exposure from non-farm uses,” Ken Cook, president of the Environmental Working Group (EWG), said in a statement.

“Another clear step would be for Bayer to withdraw the pesticide from end-of-season use on food crops, which gave rise to the contamination EWG has found on oat products, in hummus, and other food,” Cook continued.

“But unless this cancer-causing weedkiller is banned by the Environmental Protection Agency [EPA] or Bayer cuts its losses and stops making it, people will continue to be exposed and risk serious illness,” he added. “And the legal and financial disaster stemming from one of the worst business decisions ever made will remain.”

Financial Times reports U.S. glyphosate sales account for around $365 million of Bayer’s annual revenue, or less than 2% of sales by its agriculture science division.

Earlier this month, the EPA drew fire from environmental groups for arguing that Roundup should remain on U.S. shelves indefinitely, even after admitting that the review of glyphosate conducted during the previous administration was flawed and needs to be redone.